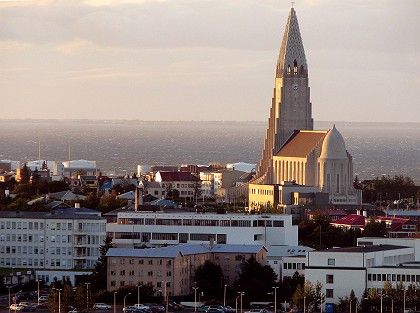 Reykjavik, Iceland: No other country in the world has been as negatively affected by the global financial crisis.

Iceland, island of extremes. In no other place on Earth do people live longer. No other country has a higher literacy rate. And no place utilizes geothermal power as much to heat houses and even sidewalks.

But Icelanders would be more than happy to relinquish the latest superlative they've attained: No other country in the world has been as negatively affected by the current financial crisis as Iceland, and this has resulted in an unprecedented fall in the value of the Icelandic krona.

Since the beginning of the year, the krona has dropped more than 20 percent against the euro, the rate of inflation has skyrocketed to almost 9 percent, and the OMX Icelandic stock index has lost a quarter of its value.

David Oddsson, chairman of the Icelandic Central Bank's board of governors and a former prime minister, rages against the "unscrupulous dealers" from abroad who are trying to break down the Icelandic financial system with speculative attacks. Prime Minister Geir Haarde also angrily suspects that hedge funds are the culprits and that they have been driven by profiteers to spread lies about an alleged banking crisis.

Haarde is intent on keeping that from happening and he is sounding the counterattack instead. He is studying his options, he announces somewhat nebulously. He will only go so far as to reveal that it will come as a big surprise, like a bear trap snapping shut.

That said, Icelanders should be careful not to let the local bears be the first to spring the traps. For a few years now, the country's three most important banks -- Kaupthing, Glitnir and Landsbanki -- have been playing in the major leagues of big money and specializing in so-called "carry trades." In these transactions, investors borrow money in countries with low interest rates, such as Japan, and invest the borrowed money in countries offering better rates of return, such as Iceland. This game with the so-called "cod bonds," named after the fish closely associated with Iceland's economy, worked fantastically until the financial crisis hit and the risk became no longer manageable.

At the same time, the banks proceeded in a spectacularly clever way by betting against their own currency. To hedge their high debts in foreign currencies, they sold their kronur in complicated futures transactions and made a lot of money when they lost value. In fact, it was billion-krona deals that caused chaos even for this small country's balance of payments. Since 2004, the foreign debt has grown fourfold. 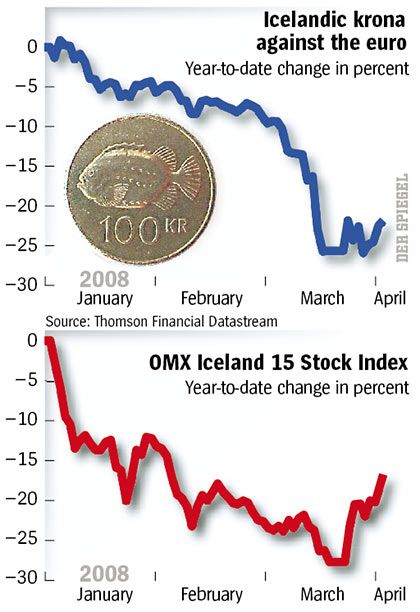 The crash of the Icelandic krona in 2008.

These kinds of unstable rates are just the ones to magically attract the hedge funds. Operating on the assumption that at some point Icelandic banks will no longer be able to pay their debts, they gamble using so-called "credit default swaps" (CDS). These swaps, which have been a part of the international speculation world for several years, are actually financial vehicles that allow lenders to safeguard their credit.

There is currently over $45 trillion (€28.4 trillion) in credit insurance floating on the global market. "This is a totally unregulated market hanging like a Damocles sword over the financial system," warns George Soros, himself the former king of speculation.

Icelanders will assure you that their economy is really as fit as a fiddle, and it is true that the country does produce a tidy budget surplus. Owing to cheap hydroelectric power, for example, aluminium processing companies from all over the world line up to set up shop here. "Fears of a meltdown in my subarctic homeland are vastly overblown," wrote Hannes Holmsteinn Gissurarson, professor of political theory at the University of Iceland and a board member of the Central Bank of Iceland, in a recent op-ed piece for the Wall Street Journal.

Nevertheless, such assurances are hardly enough to support the krona. To shore up the currency, the Bank of Iceland has raised interest rates to 15 percent, and markets are already betting that that figure will climb to 20 percent. As the next step in the "bear hunt," as Prime Minister Haarde has called his recovery strategy, the central bank might directly intervene in the market and buy up kronur on a grand scale. "An intervention," said Stefan Bielmeier, an analyst with Deutsche Bank, "wouldn't cause any major problems for Iceland's central bank."

At the same time, though, controls on the flow of capital abroad rarely promise success. "That will at best stabilize the situation for the short term," said Raffaella Tenconi, a London-based analyst for Dresdner Kleinwort, the investment arm of Dresdner Bank, "but it will only intensify the long-term problems."

Tenconi assumes that either Iceland's banks will be reorganized or that the Icelanders will abandon their own currency in favor of adopting the more stable euro.

"In the event of a fundamental banking crisis," Tenconi adds, "the large central banks can just print more money." If they did, though, the Icelandic kronur would no longer be accepted abroad.