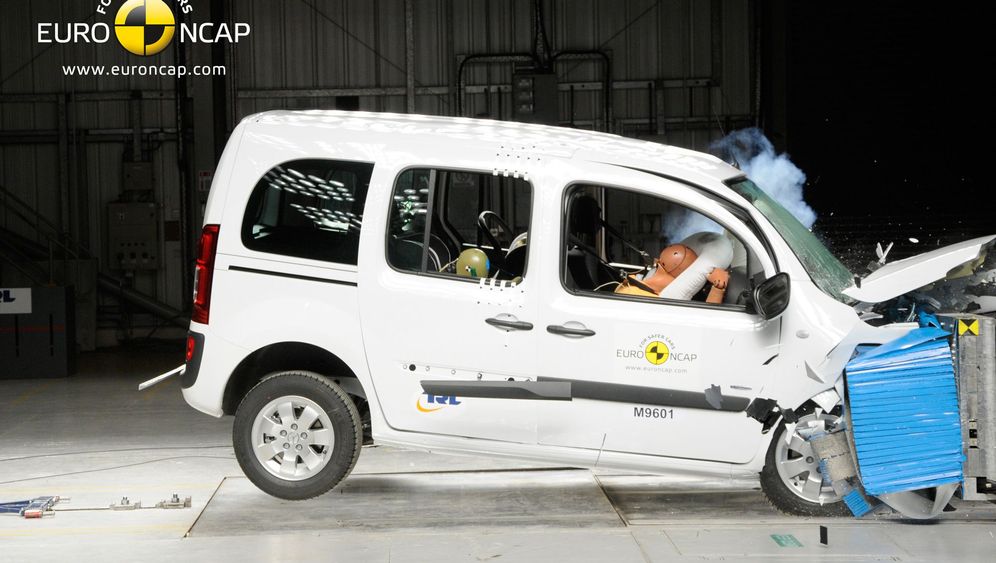 The van approached the obstacle at 64 kilometers per hour (40 miles per hour). The brakes failed to engage and the vehicle didn't swerve out of the way. Instead, it crashed into the obstacle with a loud bang. Everything had gone according to plan until now, but not necessarily for Mercedes.

The passengers were thrown forward. Luckily they were just crash test dummies, but what happened to them later proved to the German Automobile Club (ADAC) that there was a "high risk of injury for the driver and passengers in the chest area."

Consequently, the Mercedes-Benz Citan van only received three out of five possible stars in the test. According to ADAC, the van exhibited "substantial weaknesses and safety deficiencies." In two tests, "the critically important head airbag became entangled and was therefore largely useless." The results were also "inadequate" in terms of pedestrian safety.

For the Mercedes-Benz brand, which uses the slogan "Nothing But the Best" in its advertising, the ADAC assessment felt like nothing short of being written-off -- and not just the company, which on Monday announced it would recall 3,500 Mercedes-Benz Citan vans, but also one of its top executives, Wolfgang Bernhard.

The 52-year-old was long viewed as a candidate to succeed CEO Dieter Zetsche. But that is now out of the question, say several members of the company's supervisory board. Bernhard's mentor Zetsche merely muttered that the results of the tests were "completely dissatisfactory."

Bernhard, a former executive at McKinsey, had been in charge of Daimler's Trucks Division since 2009, and was therefore responsible for development of the Citan and for the disastrous ADAC test results. For cost reasons, Daimler had decided not to manufacture the van itself. Instead, it used the Kangoo, a model made by joint-venture partner Renault that has been on the market since 2008, as the platform for the Citan. Bernhard's team modified the interior, tweaked the design and stuck the large Mercedes star on front.

"Mercedes should have reengineered the vehicle more," the ADAC concluded, noting that the Renault had already exhibited "weaknesses in the crash test" in 2008.

The report reads like a miserable performance review for Daimler Management Board member Bernhard, who enjoys the reputation of being one of the most capable cost-cutters in the auto industry. But he is also one of the company's most controversial top managers.

He uses the vocabulary of a military strategist. His speech is peppered with expressions like "doing battle," pulling out the "big guns" or even resorting to "urban warfare." The executive excels at motivating his employees, but outsiders tend to be put off by his combative manner.

Bernhard's career has consistently adhered to the same pattern of steep ascent followed by a precipitous crash. At only 42, he became a member of the Daimler management board and was sent to the United States to run Chrysler. He was expected to become CEO of Daimler after his return, but he was forced to leave the company shortly before taking office. It wasn't that he had done anything wrong, but because he had brashly referred to the brand as a "restructuring case" that could only be saved with serious cuts.

Bernhard's second career as the CEO of the Volkswagen brand followed a similar trajectory. He was also expected to bring down costs at the Wolfsburg-based automaker, and he succeeded. But Bernhard also rubbed people the wrong way at VW. He angered employees and threatened that the next VW Golf would no longer be made in Wolfsburg.

In 2007, he left Wolfsburg and VW and later returned to Stuttgart, where he began his third career -- which was eventually meant to take him to the top spot at Daimler.

At Daimler, he resumed the same pattern. Bernhard made production more efficient, reducing the production time for a vehicle from 37 to 35 hours. But the hatchet man turned out, once again, to be a polarizing figure. Employee representatives withdrew from negotiations on a cost-cutting program. As Daimler Works Council Chairman Erich Klemm puts it, changes cannot be achieved "by going to war against employees."

At the beginning of the year, Klemm and his fellow Works Council members called for the replacement of CEO Zetsche. They also announced that they no longer wished to negotiate with Bernhard on further cost reductions in the company's auto plants. If they had had their way, they would have forced him out of the company then and there.

Supervisory Board Chairman Manfred Bischoff found a compromise. Zetsche's contract was renewed, but for only three years instead of five. Bernhard had to switch jobs with Andreas Renschler, who was head of the truck division at the time. Renschler had shown that he was also capable of bringing down costs by coming to an agreement with labor representatives.

It was yet another defeat for Bernhard, but it also gave him a chance to prove himself. Nevertheless, the Citan crash test results have now raised doubts as to his ability to develop cars that satisfy Mercedes standards.

Meanwhile, Mercedes-Benz will have to try to limit the damage to its image. The van is being reworked, and the developers have been instructed to ensure that the Citan receives four stars in the next crash test.