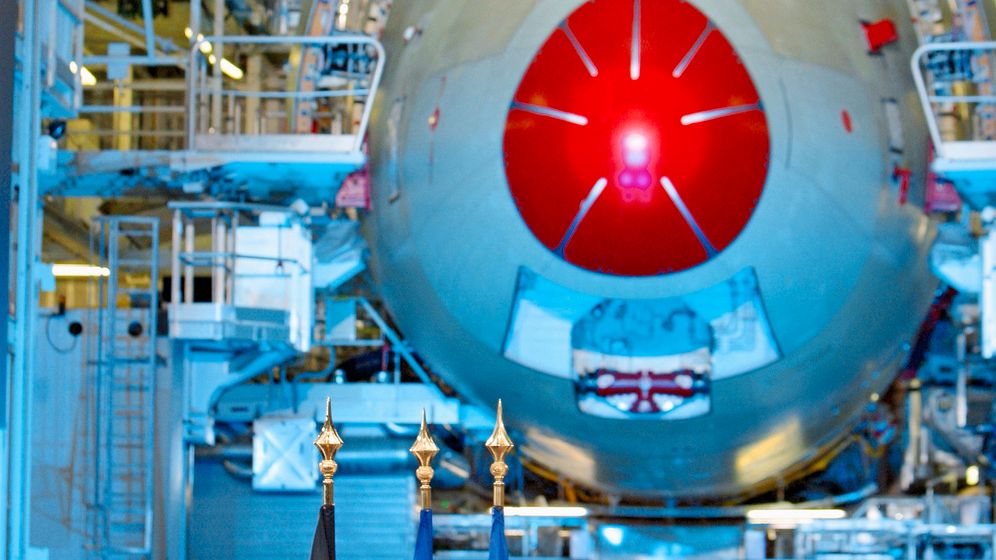 Photo Gallery: Maintaining the Balance of Power at EADS

German Chancellor Angela Merkel likes to discuss truly important matters in small groups following her cabinet meetings. That was the case last Wednesday, when she asked Economy Minister Rainer Brüderle and Finance Minister Wolfgang Schäuble to join her. In addition to the nuclear phase-out, the meeting agenda included a subject of great importance to Germany as an industrial location -- the future of the aerospace corporation EADS.

At issue is a group known worldwide for its Airbus planes, combat helicopters, military aircraft and satellites, in addition to its annual revenues of about €45 billion ($65 billion) and an unusual ownership structure.

EADS is a joint project of the French and Germans, with limited participation by the Spaniards. Until now, power within the management bodies has been carefully balanced between the French and the Germans. But now the biggest German shareholder, the Daimler Group, wants to sell its 15-percent share in the company. This forces the German government to make a decision in which it can only lose.

If it acquires the Daimler shares in the aerospace group, it will once again be violating its most important fundamental position on the market economy, namely that the government should stay out of the economy. Because of the financial crisis, the government already found itself compelled to partially convert Commerzbank into a state-owned bank. If Germany were to now also invest in the aviation industry, a few members of Merkel's centre-right coalition government would see the country as was well on its way to socialism.

But if Berlin allows Daimler to sell its EADS shares to the highest bidder, France will probably buy them. French President Nicolas Sarkozy has few scruples about intervening in the economy if it serves his country's interests. For Sarkozy, there could hardly be anything more appealing than bringing Airbus and the entire EADS Group under the French flag.

Understandably, expectations from the German industry are proportionately high when it comes to this matter. But Merkel isn't ready to make the call yet. Though it was on the agenda for her meeting with Brüderle and Schäuble, Merkel postponed any decisions.

But time is running out for the German government as officials at Daimler prepare for the possibility that the government will opt not to purchase the EADS shares.

Unless Berlin agrees to buy the shares by the end of the year, Daimler will hire investment banks to search for buyers for its €2.5-billion shares package. This doesn't mean that the company wants to pressure to the government, says a senior executive, noting that Daimler's shareholders are instead pressing the company to exit the risky aerospace business.

A consortium agreement under which Daimler committed itself to the investment expires at the end of 2012, by which time the company plans to sell the bulk of the share package. Whether it sells to the government-owned KfW development bank or investors, possibly from France, ought to be irrelevant to Daimler as a company and to him as a salaried top manager, the executive source says. But as a German citizen, he would greatly regret a French takeover that would signify the sellout of a high-tech sector, with serious consequences for Germany as a production location.

EADS is not an ordinary company that, for example, manufactures where it's most cost-efficient. EADS is a political event. When the group's most important subsidiary Airbus assigns the assembly tasks for a new aircraft, production is divided up partly based on the proportion of shares Germany, France and Spain hold in the company.

If the French assume control of EADS in the future, it seems clear that new aircraft, helicopters and satellites will be developed and produced primarily in France. The group headquarters in Paris and the Airbus plant in Toulouse would become the company's power centers, whereas the Ottobrunn facility near Munich, where the chief financial officer is currently located, would be nothing but a branch office. Until now, representatives of EADS shareholder Daimler have prevented such power shifts from taking place. For instance, former EADS Chairman and current Daimler Supervisor Board Chairman Manfred Bischoff made sure that Hamburg was expanded into the center for Airbus's core business. Since then, the A320 family has been assembled at the city's Finkenwerder plant, which employs more than 11,000 people.

In return, Toulouse was awarded the contract for the coveted final assembly of the A380 wide-body aircraft. As a consolation prize, the Germans were given the task of providing the interior fittings and the prestigious delivery to customers in Europe and the Middle East.

Airbus managers believe that a French-dominated EADS would reduce the size of the German locations over the years. Eventually the German plants would become so drained of technological expertise that they would lose the ability to build complete aircraft according to the latest standards, mutating into mere sheet metal benders.

This would weaken Germany as an industrial location. Aviation is both a high-tech and a growth industry. But why should the government invest in the aircraft maker? After all, US competitor Boeing is also a privately held company.

Although Boeing is formally independent of the US government, the company still benefits greatly from it. The US Defense Department awards lucrative contracts to Boeing that come with profits EADS could only dream about.

EADS recently failed in its attempt to secure a major military contract in the United States. Even though Airbus was ahead in the first round of bidding, the Defense Department ultimately decided to buy 179 tanker aircraft from domestic manufacturer Boeing in a contract worth up to $35 billion.

The strong military business makes it easier for Boeing to take risks in civil aircraft production, as it did in the development of the new 787 Dreamliner, which aviation experts estimate cost more than $15 billion to build. But if a project of this magnitude turns out to be a flop, the future of the entire company is at risk.

Airbus faces similar concerns in the development of the A380 and the A400M military transporter, both reasons German companies are not interested in investing in EADS and Daimler wants to get out.

"Nowadays aviation no longer works on a purely private economic basis," says one Daimler executive, noting that aircraft construction is a "yo-yo business," in which a company can plunge from great heights in a short amount of time. Such prospects even deter private investors with a long-term orientation, leaving only the government as a potential investor, the executive says.

Financially, an investment in EADS would be a relatively straightforward step for the German government. It could safeguard the future of the aviation industry in Germany for about €2.5 billion.

But purchasing the EADS shares would be a political gamble for the government, especially for Economy Minister Brüderle, a member of the pro-business Free Democratic Party (FDP). Nevertheless, the government is under pressure because three alternatives being discussed within the administration stand little chance of being implemented.

The government would actually prefer to see France sell its shares too, so that EADS could become a largely private company. France and Germany could then secure their influence through a so-called golden share. Although both countries would own only one share each, they would have a veto over key decisions, because defense projects are also developed at EADS.

But this proposal is likely to fail due to lack of support from French President Sarkozy, who wants more, not less influence over key corporations.

German Suppliers to the Rescue?

Under a second plan, German suppliers to EADS, like Diehl, Liebherr and MTU, would buy the Daimler shares. But these companies would have trouble raising the billions needed for the purchase, and could hardly carry the risk of such an investment. Besides, it would be a conflict of interest because they also sell their technology to Airbus competitor Boeing.

A third plan calls for EADS to buy its own shares from Daimler. But then the company would lack the necessary €2.5 billion for other investments, a circumstance that would require management to reject such a proposal. Besides, this solution would increase the influence of the French government, because it would retain its shares.

However a model the government devised four years ago, when Daimler sold a 7.5-percent share in EADS, could lead to a workable solution. Chancellor Merkel assembled a consortium of private banks, a few state-owned banks and the government-owned KfW development bank, which then acquired the shares for €1.5 billion. The consortium transferred the voting rights to Daimler and received a significantly higher dividend in return.

The whole thing is nothing but window dressing, which is why the government hasn't had any objections to it yet. Much of the money for the investment comes from the government, albeit indirectly. On the surface, however, the Federal Republic of Germany hardly appears to be involved. Daimler, a private company, represents the German interests in the EADS management and supervisory board.

But the parties involved will not agree to such a commitment a second time around. It would mean more than doubling their investment to €4 billion. The state-owned banks, in particular, lack the funds to do so, which is why the KfW banking group would have to acquire the majority of the shares. It would be difficult to conceal the fact that the German government is acting as an entrepreneur in the aerospace industry. Such a decision would also be a remarkable about-face.

Almost 25 years ago, a coalition of the conservative Christian Democrats (CDU), their Bavarian sister party the CSU and the Free Democrats (FDP) privatized the aviation industry. The chancellor at the time was Helmut Kohl and the economics minister was FDP politician Martin Bangemann. They urged carmaker Daimler-Benz to acquire aircraft manufacturer MBB.

The federal government, which held a stake in MBB through the State of Bavaria and the city-states of Hamburg and Bremen, wanted to relinquish its role as an investor in the aerospace industry. Daimler acquired a stake in MBB, and the aircraft manufacturer gradually turned into EADS. Today the government, again led by a CDU/CSU/FDP coalition, could once again be buying shares in an aviation company.

This cannot be a pleasant concept for devotees of the market economy, which is why the German government is trying to entice Daimler to hold onto its EADS shares, after all. One tactic has been holding out on the prospect of a generous subsidy for the production of electric cars at the automaker.

But Daimler CEO Dieter Zetsche and leader members of the supervisory board are determined to close the EADS chapter. "Anyone who fills his cheeks with air," says a Daimler executive, "has to go ahead and whistle."