It was a fight between David and Goliath. But this time David lost: Porsche has slammed the brakes on its planned take-over of Volkswagen. The controlling share holders of Porsche Automobil Holding, the Porsche and Piech families, agreed on Wednesday that the takeover was off the table and that they were now moving toward a merger and "the creation of an integrated car manufacturing group." For Porsche boss Wendelin Wiedeking the decision is a bitter defeat.

The Porsche CEO had an amazing plan: He wanted to swallow up Volkswagen, a company 15 times the size of Porsche. And he almost reached his goal. Now, however, the two families who own Porsche have opted for a different path, with the two companies merging to become equal partners. Porsche will be just one of 10 brands in the new company, alongside Seat in Spain and Skoda in the Czech Republic. On Wednesday, however, the company emphasized that the Porsche brand's indepedence will be maintained.

The takeover bid had lasted two years but the merger will come much faster. A working group now has just four weeks to come up with a plan.

It was all supposed to be so different. Porsche, the attacker, on the one side, Volkswagen, the intended victim on the other. Indeed, it had looked as if the sports car manufacturer from Stuttgart in southern Germany would stop at nothing to achieve its goal. In the end, the hurdles were too great. The state of Lower Saxony, which still owns 20 percent of VW, and its Governor Christian Wulff remained a thorn in Porsche's side. Under the controversial VW law, which restricts individual shareholders to a 20-percent portion of voting rights, regardless of how much they own, Lower Saxony, can veto any important decisions at the company. Then there was the powerful Volkswagen workers council which was massively opposed to a prospective takeover. To complicate matters further VW supervisory board chief Ferdinand Piech, a grandson of the Porsche founder, owns 10 percent of Porsche Automobil Holding and as such has a say in what the company does.

Nevertheless Porsche seemed in a strong position: The luxury sports car manufacturer seemed to be on the verge of taking over the much bigger company. In January it announced that it had secured over 50 percent of VW shares and its aim was to own 75 percent by the end of this year. The purchase had been made possible by an elaborate financing model, developed by Wiedeking and Porsche's Chief Financial Officer Holger Härter. Porsche raked in profits on VW share options which in turn financed the purchase of the shares.

And it seemed to be working. The Volkswagen share price soared last year -- pushed up by the prospect of the takeover. At one stage VW was the most valuable company in the world and Porsche was able to make huge profits, at a time when hedge funds and other stock market gamblers betting on the VW share price falling were losing millions if not billions in the process. In the end it wasn't enough, though. Wiedeking was never able to get beyond the 51 percent of shares.

There has been much criticism that Wiedeking bit off more than he could chew. However, there are also those who argue that Porsche was unlucky in its timing and fell victim to the global downturn and credit crunch.

What is certain is that Porsche took on huge debts in order to be able to buy up the VW shares. At first banks were more than willing to come up with the cash. But then the financial crisis hit and it became increasingly difficult to extend credit lines. Meanwhile, interest payments were increasing. The company was forced to announce that it was sitting on a €9 billion ($11.9 billion) debt and, according to information obtained by SPIEGEL, Porsche will have to find new financing within the next few months.

In the end the Porsche management was forced into a spectacular about-face. They have now opted for a merger with Volkswagen and there is no more talk of takeovers.

It is still unclear who is going to have the final say in the new company. It is not even clear where the company headquarters will be, in Stuttgart or at Volkswagen's current HQ in Wolfsburg. But one thing is clear: Porsche will not be running the show alone.

Volkswagen has welcomed the Porsche and Piech families' decision. The company will be playing an important role in the working group charged with coming up a future company structure. The state of Lower Saxony and VW worker representatives will also be taking part in the talks. This is very different from how Wiedeking envisaged things would go.

The Porsche boss is also facing another possible embarassment. There are reports that the company is looking for a capital increase in order to offset its massive €9 billion debt. 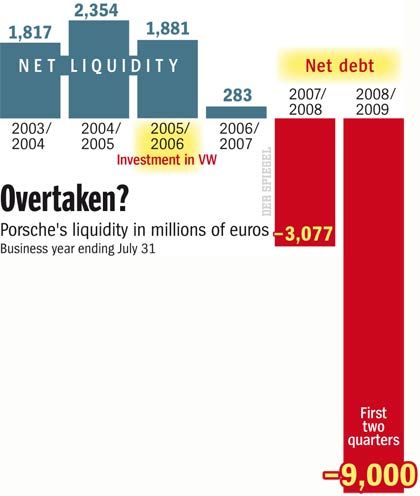 That could come from two sources. The Porsche and Piech families may be forced to dig into their own private fortunes. Reuters on Wednesday reported that a person familiar with the matter said that Porsche's shareholders would fund a capital increase of up to €5 billion ($6.7 billion) in 2009 or 2010. The company could also seek an external investor. There have been rumors that an Arab sovereign wealth fund might step into the breach. The Emir of Qatar has been mentioned as one possibility. After all, the luxury brand name Porsche may be far more attractive in the Arab world than, for example, Opel -- another German carmaker facing difficulties.

Whoever ultimately brings more money to Porsche/Volkswagen, one thing is certain: Any new investor will mean less shares for the other shareholders. If the balance is to be maintained then it won't just be the Piech and Porsche families that will be looking to invest more in the company. Lower Saxony would also have to buy more shares to maintain its 20 percent stake. Otherwise the VW law would no longer apply and the state would not be able to block key decisions at Volkswagen, something that Governor Wulff will certainly want to avoid.

The big loser, however, still remains Wiedeking. The VW takeover was his idea and he will always be associated with its failure.

Wiedeking has been at the helm of Porsche since 1992. When he took over he whipped the struggling company into shape with a series of drastic cost-cutting measures. He has been well paid for his efforts. His salary is estimated to be around €60 million a year.

While he may have excelled at Porsche, his performance in the bid to take over Volkswagen has been far from impressive. The Wolfsburg company was put off by his cocky manner. Many felt that the fact that a relatively small company wanted to swallow up Europe's biggest carmaker was presumptive to say the least. Wiedeking became a kind of hate figure for VW workers once he made it clear that he wanted to wrestle power away from the works' council, which represents the interests of employees.

Ferdinand Piech, on the other hand, cut a much better figure with the workers. The 72-year-old chairman of the board at Volkswagen was regarded as someone adept at pulling the strings. He could now be a big winner in the forthcoming merger. The former Volkswagen CEO is a grandson of the Porsche founder and has a 10 percent stake in Porsche Automobil Holding. He is the person who knows both companies best. He is assumed to have engineered the merger idea, having dreamt for years of creating an auto giant at Volkswagen. It is likely that he will be a key figure in the emerging new company. It is unclear, on the other hand, how Wiedeking will fare in the new Porsche/Volkswagen.

Nevertheless he did have some success opposing Piech. There had been some speculation that Volkswagen was preparing to takeover Porsche AG, the sports car manufacturing part of Porsche. However, Wolfgang Porsche refused to consider this and prevailed over his cousin Ferdinand Piech.

With a merger, the veneer of equality is maintained -- at least for now.