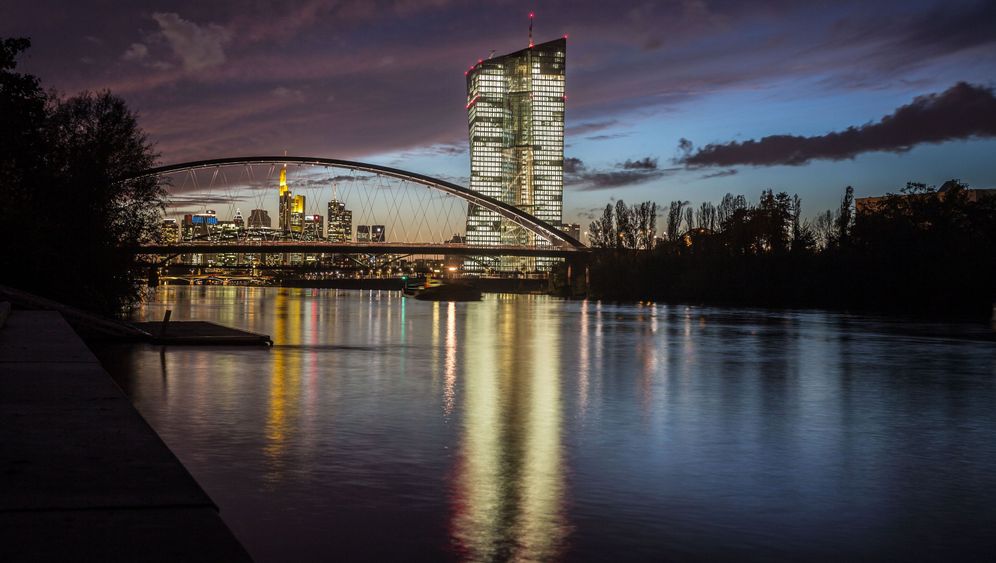 At first glance, there's little evidence of the sensitive deals being hammered out in the Market Operations department of Germany's central bank, the Bundesbank. The open-plan office on the fifth floor of its headquarters building, where about a dozen employees are staring at their computer screens, is reminiscent of the simple set for the TV series "The Office". There are white file cabinets and desks with wooden edges, there is a poster on the wall of football team Bayern Munich, and some prankster has attached a pink rubber pig to the ceiling by its feet.

The only hint that these employees are sometimes moving billions of euros with the click of a mouse is the security door that restricts access to the room. They trade in foreign currencies and bonds, an activity they used to perform primarily for the German government or public pension funds. Now they also often do it for the European Central Bank (ECB) and its so-called "unconventional measures."

Those measures seem to be coming on an almost monthly basis these days. First, there were the ultra low-interest rates, followed by new four-year loans for banks and the ECB's buying program for bonds and asset backed securities -- measures that are intended to make it easier for banks to lend money. As one Bundesbank trader puts it, they now have "a lot more to do."

Ironically, his boss, Bundesbank President Jens Weidmann, is opposed to most of these costly programs. They're the reason he and ECB President Mario Draghi are now completely at odds. Even with the latest approved measures not even implemented in full yet, experts at the ECB headquarters a few kilometers away are already devising the next monetary policy experiment: a large-scale bond buying program known among central bankers as quantitative easing.

The aim of the program is to push up the rate of inflation, which, at 0.4 percent, is currently well below the target rate of close to 2 percent. Central bankers will discuss the problem again this week.

It is a fundamental dispute that is becoming increasingly heated. Some view bond purchases as unavoidable, as the euro zone could otherwise slide into dangerous deflation, in which prices steadily decline and both households and businesses cut back their spending. Others warn against a violation of the ECB principle, which prohibits funding government debt by printing money.

Is it important that the ECB adhere to tried-and-true principles in the crisis, as Weidmann argues? Or can it resort to unusual measures in an emergency situation, as Draghi is demanding?

A Mixed Record in Japan and the US

The key issues are the wording of the European treaties, the deep divide in the ECB Governing Council and, not least, the question of what monetary policy can achieve in a crisis. Is a massive bond-buying program the right tool to inject new vitality into the economy? Or does it turn central bankers into the accomplices of politicians unwilling to institute reforms?

The question has been on the minds of monetary watchdogs and politicians since the 1990s, when a German economist working in Tokyo invented the term "quantitative easing." Its purpose was to help former economic miracle Japan pull itself out of crisis after a market crash.

The core idea behind the concept is still the same today: When a central bank has used up its classic toolbox and has reduced the prime rate to almost zero, it has to resort to other methods to stimulate the economy. To inject more money into the economy, it can buy debt from banks or bonds from companies and the government.

The Bank of Japan finally began to implement the concept, between 2001 and 2006, but the country sank into years of deflation nonetheless. After the financial crisis erupted, central bankers in Tokyo tried a second time to acquire government bonds on a large scale, in the hope that earlier programs had simply not been sufficiently forceful. Between 2011 and 2012, the central bank launched emergency bond-buying programs worth €900 billion ($1.125 trillion). Finally, in 2013, the new prime minister, Shinzo Abe, opened up the money supply completely when he had the central bank announce a virtually unlimited bond buying program.

A Higher Debt-to-GDP Ratio than Greece

But the strategy, known as "Abenomics," worked only briefly. After a high in 2013, in which Abe proudly proclaimed that Japan was "back," industrial production declined once again. With a debt-to-GDP ratio of 240 percent, much higher than that of Greece, investments declined again, despite the flood of money released under Abenomics.

Businesses and private households were simply too far in debt to borrow even more, no matter how cheap the monetary watchdogs had made it. The banks, for their part, still failed to purge all bad loans from their books, because the central bank was keeping them artificially afloat. "For decades, the Japanese government did not institute the necessary structural reforms," says Michael Heise, chief economist at German insurance giant Allianz.

Ben Bernanke, the former chairman of the US Federal Reserve, demonstrated that under different circumstances quantitative easing could indeed work. After the collapse of investment bank Lehman Brothers, Bernanke, a monetary theorist, spent close to $1.5 trillion to buy up mortgage loans, corporate bonds and US Treasury bonds.

A second program was launched in 2010, followed by a third in 2012. This time the Fed decided that the program would continue until unemployment had declined to 7 percent. Bernanke's successor, Janet Yellen, only put an end to the latest round of quantitative easing last week.

During this period, the Fed, through its emergency measures, has inflated its balance sheet by about $1 trillion to $4.5 trillion, and the economy is now falling into step once again. Unemployment has dropped from 10 to 6 percent, and the annualized growth rate in the third quarter was 3.5 percent. Many observers believe that this alone proves that Bernanke's mega-experiment was a success.

Relatively strong consensus only exists over the fact that the Fed, with its massive intervention, quickly returned many credit markets to normality after the crisis erupted by buying up securities that suddenly no one else wanted. But have the quantitative easing programs also stimulated the economy in the long term?

In a study, the Fed itself concludes that its programs reduced the unemployment rate by 1.5 percent in 2012. Other studies found that long-term interest rates on government and corporate bonds declined significantly as a result of the Fed's buying spree. Still others question the efficacy of the programs, especially more recently.

So who's right? "It's nearly impossible to measure that," says Clemens Fuest, president of the Center for European Economic Research, "if only because we don't know what would have happened without the programs."

The lack of certainty has led many economists to believe that the effects of the bond buying programs were not all positive. On the contrary, the longer the central bank pumps up the markets with its injections of liquidity, they warn, the stronger the policy's side effects get. Because yields on many investments declined along with borrowing rates, more and more market players ignored the risks associated with many halfway lucrative business opportunities.

In Europe, for example, bond traders and other investors began buying up Greek, Spanish and Italian government bonds after the debt crisis had subsided, so that some of the former crisis-ridden countries are now paying even lower interest rates on new borrowing than before. Meanwhile, in the United States, corporate debt securities known as junk bonds became the latest trendy investment.

Junk bonds come with an enormous risk of default, but they are also considered very high-yield investments. The market blossomed, at least until recently. But what this means for the US economy may not become apparent for several years. More than $700 billion in junk bonds will mature by 2018, and "a large number of companies will suddenly have great trouble finding follow-up financing," warns Allianz economist Heise.

On the global exchanges, the mood among investors was long delirious. In June, the Bank for International Settlements, an international organization of central banks, noted a "puzzling disconnect" between the boom and actual economic developments. Because debt has also been growing worldwide, the financial system is, in a certain sense, even more fragile than before the crisis, said Jaime Caruana, the bank's general manager.

Whether this is true could become apparent in the next few weeks. Once the Fed has stopped its ongoing injection of liquidity into the economy, many observers fear severe withdrawal symptoms in markets and exchanges.

Nevertheless, ECB President Draghi is coming under growing pressure to hazard the risky experiment in the euro zone. The region's economy is stagnating and inflation continues to decline. "If the central bank did nothing to counteract the threat of deflation, it would be like withholding treatment from a patient with pneumonia because of the potential side effects," argues Joachim Fels, chief economist with investment bank Morgan Stanley.

The only problem is that the recipe for cheap money is no longer showing much effect in Europe today. In September, ECB President Draghi offered banks four-year loans at ultra-low interest rates, under the condition that the institutions would pass on the funds to the economy through lending. But the amount of borrowing that ensued -- €82.6 billion -- was significantly less than anticipated.

The demand for credit is simply too low in many places. The economy is ailing as a result of a lack of investment and low consumption rates, because households and businesses in a number of countries are still in too much debt. Countries like Italy and France are also dragging their feet with important reforms that could make their industries competitive once again.

If the ECB does launch a buying program for government bonds, another problem arises. To avoid coming under the suspicion of trying to provide funding primarily to crisis-ridden nations, it will probably have to acquire the bonds of all euro-zone countries. For the ECB itself, the most likely approach is to simply base its bond-buying program on each country's initial contribution to the ECB, known as the capital key.

But then the central bankers would also have to buy large numbers of German bonds, which would be a "largely pointless exercise," as Willem Buiter, the chief economist at US bank Citigroup, puts it. Interest rates on some German government bonds are already in the negative range.

Buiter can readily be described as a proponent of active monetary policy, and yet he too believes that this approach only works if accompanied by structural reforms. Monetary policy alone isn't enough to combat persistent stagnation, he says, "which is what the euro zone is heading for."

It's no surprise that the ranks of skeptics are also growing within the ECB. Bundesbank President Weidmann has long warned that the central bank cannot be allowed to become a "sweeper" for policymakers. Now German ECB Supervisory Board member Sabine Lautenschläger is coming to his defense, saying that the purchase of government bonds could only be a "last resort" in the event of a deflationary spiral, essentially the final ammunition of monetary policy. The critics of further quantitative easing measures also include the Executive Board members from Luxembourg, Austria, the Netherlands and Estonia.

It was US economist Melvyn Krauss who proposed a compromise in the German financial newspaper Handelsblatt last week that many central bankers read with interest. According to Krauss, the ECB could exclude from a bond purchasing program countries that Brussels had admonished for deficit violations. In this way, quantitative easing would become an "enticement" for politicians to institute reforms.

Will Krauss's proposal produce a consensus? Europe's central bankers remain skeptical. "I don't see the south accepting this," one of them said, referencing to Southern European countries.