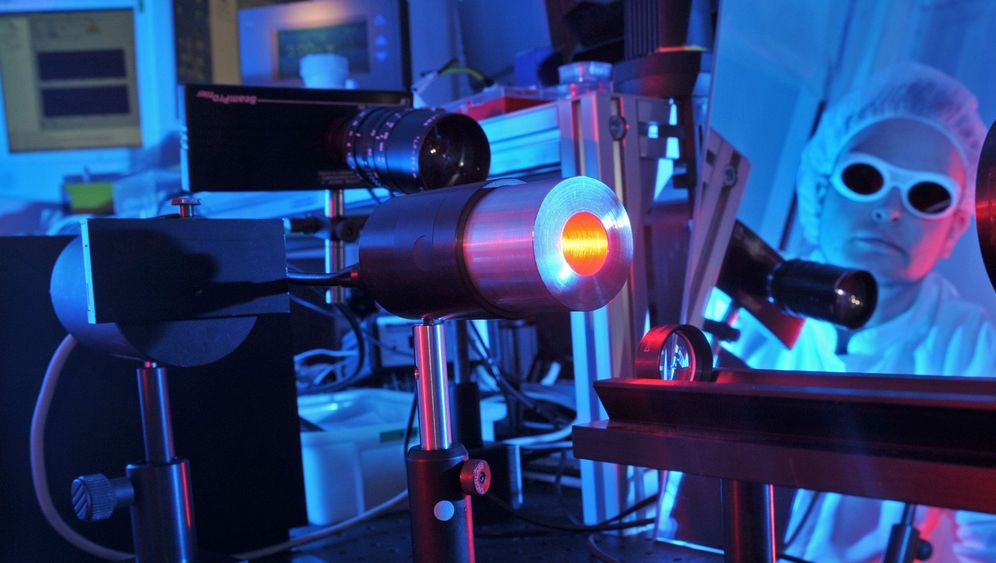 Olaf Kühn is happiest about his job when he is driving along the pearl necklace in the morning. That's what locals call the A73 autobahn, which fills with cars in the morning and the evening, with their glittering headlights strung tightly along the highway like pearls on a necklace.

Thousands of commuters use the route, which stretches from Arnstadt in the eastern German state of Thuringia to Coburg in Bavaria and on to Nuremberg. "The traffic jams can go on for kilometers, but I just drive past," Kühn says with a smile. His commute, after all, takes him from west to east, the opposite of the prevailing trend. Every morning at about six a.m., Kühn drives to work from Bavaria to Thuringia.

Kühn works as a CNC programmer at Analytik Jena, a company that emerged from optical instrument maker Carl Zeiss, in Eisfeld just southwest of Leipzig. The 48-year-old lives near Coburg in Upper Franconia, where he also worked until 2008. But then Reinhard Jacob, the Analytik Jena plant manager, recruited him. "I spent a year trying to convince him to work for us," says Jacob. "We just didn't have enough good people here."

Kühn earns just as much as he did in Bavaria, even though salaries in eastern Germany generally remain significantly lower than in the West. With the emergence of a new economic boom in Germany, specialists like Kühn are more in demand than ever, and they are being courted and recruited accordingly. To attract employees like Kühn, companies have to come up with attractive incentives.

Businesses in the states of the former East Germany have to be especially creative. The eastern states are ahead of the rest of the country in at least one respect: From Rügen in the north to Plauen in the south, the lack of skilled workers that western states will not fully experience until about 10 years from now has already become reality.

In the third quarter of 2010, the number of open positions throughout Germany grew to 986,000, a 19 percent increase over the same period last year, and the trend will only intensify in 2011. Although some three million people are also registered as unemployed, this doesn't solve the problem.

Labor market experts use the term "mismatch" to describe a situation in which an unemployed person is not offered any of the unfilled positions on the market. Either the job seeker has the wrong qualifications or none at all, is too old, is insufficiently mobile or is unsuitable for other reasons. Additional job training and costly qualification measures are a stopgap solution at best.

So far, there has been little agreement among experts on the question of the lack of skilled workers. In a new study, the German Institute for Economic Research (DIW) even characterizes the issue as a "Fata Morgana." According to the DIW, there is "no evidence" pointing to a general lack of available workers. For example, say DIW experts, salaries for skilled workers have hardly increased, and the number of qualified unemployed people exceeds the number of available jobs.

The DIW also points out that in light of the growing numbers of students pursuing degrees in science and technology, a shortfall is not to be expected. However, the DIW study also acknowledges that bottlenecks could develop in high-growth regions, as well as in large parts of eastern Germany.

On the other hand, an internal survey conducted by the Federal Employment Agency among its 176 local employment agencies shows that the lack of skilled workers is already a reality today. Two-thirds of the participating agencies reported significant bottlenecks in many areas. In July, there was an average of 7.5 unemployed workers for every open position. The study lists 16 professions, from plumbers to engineers to doctors, in which the problems are especially glaring.

The microcosm of southern Thuringia offers a telling example of what has become symptomatic for parts of the east, particularly along the former border between East and West Germany and the booming regions surrounding the cities of Dresden, Jena and Potsdam. In the district around Eisfeld, not far from the border of Bavaria, for example, the number of open positions was 48.8 percent higher in October 2010 than it was in October of 2009. Unemployment there is 6.7 percent, which is about the same as the average in the West. There are already about 16,000 commuters who drive to work every day from the West to the East.

For a number of reasons, demographic changes affected the East earlier and more strongly than the West. Not long after German reunification, the birth rate plummeted in the East -- meaning that since 2006, significantly fewer young people have been entering the work force.

In addition, many eastern Germans, especially young people, are moving to the West -- a trend that has continued unchecked for years. The eastern states have lost about 1.5 million workers since 1990. If the trend continues, the population between the ages of 15 and 64 in the East will be cut in half, to 4.5 million, by 2050. At the same time, large groups of older people are entering retirement.

From West to East

A historic shift occurred in southern Thuringia this year. For decades, the number of high-school graduates in the state had exceeded the number of training positions. That relationship has now been reversed for the first time.

While the number of new apprenticeship agreements in trade professions in the West was still 4.4 percent higher than in the previous year, that number has already declined by 1.7 percent in the East. There are simply not enough young people anymore. As a result, companies in the eastern states are now recruiting both skilled workers and trainees in the West.

"I didn't have a problem going to the East," says Linda Duwe. "I wanted to move out of my parents' house, anyway, so I didn't care where I went." The 20-year-old from Einbeck near Göttingen in central Germany was determined to become a printer, specializing in digital printing. After sending out about 30 applications, she ended up choosing the best offer, which came from a company in Ilmenau, Thuringia.

For the past three months, Duwe has been in a training program, learning her profession of choice, at EDU-Con, a small publisher specializing in advanced training. "We're glad that Linda came to us," says Managing Director Kristin Schlötel. "Otherwise we would have found it difficult to fill this training position." This year, EDU-Con received about half as many applications as it did three years ago, when the last training program began.

These developments show that the lack of skilled workers is no longer an economic problem but a structural one. Well-trained individuals are becoming the most important and scarce commodity in a modern industrial and service society. This doesn't just apply to Germany, but in hardly any other country is the outlook quite as dramatic.

Beginning in 2012, the number of people in the 20-to-64 age bracket will decline sharply. Economists refer to this group as the potential labor force. It includes everyone who is theoretically available to the labor market in an economy. By 2030, there will be 6.3 million fewer people in this group than there are today.

For employees, the initial consequences are not unpleasant. On the whole, wages will increase and the income gap between the East and the West will narrow. This is what the Dresden branch of the Ifo Institute for Economic Research expects, and so do others. "Wages will explode, especially for new hires," says industrial sociologist Burkart Lutz, adding that there will be a "substantial increase in average wages." At the same time, however, the lack of skilled workers creates "a substantial potential for crisis," especially for companies in eastern Germany, says Lutz. In the worst case, the region could be in for "another wave of deindustrialization."

Yvette Töpfer recognized that she had to be creative if she wanted to attract qualified workers to the company she runs, Glasbearbeitung + Beschichtung Neuhaus, which treats glass objects such as bulbs with temperature-resistant coatings for the automobile industry, among others. Business was stagnant until recently. Töpfer lacked a proper head of R&D, and innovation suffered as a result. She spent two years searching for candidates in the region, but it wasn't until she hired a headhunter that she found what she was looking for -- in the West. In the end, she even got the better of a giant corporation like BASF, which had also offered a job to her new employee. Markus an der Heiden, who holds a doctorate in chemistry, moved with his family from Darmstadt near Frankfurt to Neuhaus in Thuringia, where he was offered a higher salary than he could have earned in the West. The company also paid for his living expenses and trips home during his trial period. When his wife joined him in Neuhaus, the company made the necessary kindergarten arrangements for their child and is now paying the costs, as well.

Such princely treatment of new hires has been the exception to date. Unless Germany manages to compensate for a declining population by adding more women and older people to the workforce, as well as bringing in professionals from abroad, the entire country will be threatened with a downward spiral.

The threat is sufficiently real to have made an impression on politicians. Almost all ministries in the federal government are currently involved in eight working groups that address the lack of skilled workers in one way or another. In its fall report, the German Council of Economic Experts has emphasized, once again, the importance of the skilled worker issue. There is also no lack of proposals in the current debate, although concrete resolutions have been infrequent.

It still seems as if the discussion merely involves making a choice among various alternatives. But the real challenge will be for politicians to use all available instruments to successfully address the looming lack of trained workers in the future.

Germany is involved in an international competition for the resource of skilled workers. Among international managers, Germany currently ranks forth among producers of talent, behind the more populous countries of China, the United States and India.

This means that German companies must compete for every skilled works, like Coburg programmer Kühn, who plans to make a permanent move to eastern Germany soon. However, Kühn will not be moving to Eisfeld, where he works now, but to a town near Potsdam outside Berlin. He intends to leave his job at Analytik Jena, now that he's received a better offer in Potsdam.