In May 2012, shortly before ending his term as CEO of Deutsche Bank, Josef Ackermann realized with some remorse that "no deal is worth risking the good reputation of Deutsche Bank."

But, by then, the reputation of Germany's largest bank was already somewhat battered -- and it's suffered even more since. The latest scratch came on Thursday, when the bank reported a surprise net loss of €2.2 billion ($3 billion), for the fourth quarter of 2012, citing numerous lawsuits and official investigations among the reasons.

This makes it all the more surprising that Jürgen Fitschen, who succeeded Ackermann along with co-CEO Anshu Jain, is now returning to the type of business that could further damage the bank's image: speculation in agricultural commodities.

This is precisely the business that organizations such as Foodwatch and Oxfam, and even United Nations institutions such as the Conference on Trade and Development (UNCTAD), hold partially responsible for hunger in the world.

The fact is that, in recent years, an enormous market has developed for financial products used to speculate on fluctuations in food prices. Critics say that these deals drive up the prices of corn, rice, wheat and other commodities, making food unaffordable for many in the Third World.

The accusations have been so vehement that Deutsche Bank suspended its business in agricultural commodities until it could be proven that speculation didn't harm anyone. Such proof has apparently now been supplied, at least in the bank's view.

Deutsche Bank can now cite a study by Ingo Pies, an expert in business ethics from the eastern German city of Halle. After reviewing selected publications, he concluded that the agricultural markets would function worse, not better, if speculation were curtailed. "Trying to ban it would torpedo the moral concern for sustainably fighting worldwide hunger," says Pies. He concludes that putting more rather than less emphasis on the free market is the key to achieving this objective.

The study's findings didn't surprise Fitschen. He believes that the discussion over food speculation is headed in the wrong direction. As the son of a farmer, he saw firsthand how price fluctuations could cause problems for farmers. When harvests were bad and the price of hog feed went up, a farmer could quickly be driven to the brink of ruin. Today, Fitschen argues, so-called derivatives enable farmers to hedge against price fluctuations.

Through futures transactions, banks give farmers, exporters and other business owners the ability to set the price at which they will buy or sell commodities, such as wheat, pork or coffee beans, in six or 12 months' time. Soybean producers in Brazil, for example, are often unable to receive loans for production unless they can ensure that they'll be able to sell a certain amount of soybeans at guaranteed prices.

Even conservative managers in the finance industry admit that there are risks involved. But, they add, the true villains in the markets are completely different. They include, for example, global commodities giants such as Switzerland-based Glencore, which, unlike Deutsche Bank, is relatively unknown to the general public.

Companies like Glencore own mines and large tracts of land, which allows them to exert considerable influence on prices. Commodities giants based in Switzerland alone, a center of the industry, control 15 to 25 percent of the global ore, oil and agricultural trade. Industry revenues went up fivefold between 1998 and 2010.

Proponents of the business even believe that restricting it is wrong. They point out that it's impossible to monitor who buys the futures contracts. You don't even know who is sitting at the other end, Alexander Dibelius, head of the German operations of the investment bank Goldman Sachs, said in a recent SPIEGEL interview. It could be "the good farmer or the evil speculator, or perhaps both in one person, because the farmer could also be speculating on what the weather holds, couldn't he?"

What's more, for every risk that food producers sell, there also have to be buyers -- that is, speculators betting that this risk will become reality. In these transactions, the bank is generally merely an intermediary between seller and buyer.

There is no lack of investors willing to accept the risk of price fluctuations in food and other commodities. Goldman Sachs is involved in 25 to 30 commodities markets, including coffee, soybean, wheat and beef markets. Agricultural commodities make up about 20 percent of the business. On the whole, investment banks have greatly expanded their commodities businesses over the last decade. Even after the financial crisis, speculating in commodities is still considered lucrative.

As a result, the markets in which contracts for agricultural commodities are traded have developed a life of their own. The volume of financial transactions is between 20 and 30 times as large as the real transactions. This would certainly be unnecessary if it were purely for the purpose of hedging against risk. In other words, speculation is the real objective. And, yet, are we to believe that speculation doesn't impact real prices?

Critics of the analysis of Pies, the business ethics expert, say that it is precisely here that one can find one of its weaknesses. They cite other studies, the experiences of international organizations and the sheer volume of money being invested. For José Graziano da Silva, director-general of the Food and Agriculture Organization of the United Nations (FAO), speculation is "an important reason for fluctuating and high prices." In his view, the only ones who profit from speculation are banks and hedge funds, not producers, buyers and investors. This has led the European Union to want to approve new restrictions and rules for financial investors in the agricultural sector. A number of German financial institutions, including Commerzbank, Deka-Bank and the state-owned banks known as Landesbanken, have pulled out of the business.

What happened to the American real estate market in the 2008 financial crisis shows what distortions can occur when too much money flows into a market, and when too many derivatives are tied to a limited scope of real goods.

This is the fundamental problem of all financial derivatives, whether they concern mortgages, currencies or agricultural commodities: They can be helpful in offsetting price fluctuations, but they can also amplify these fluctuations. The higher the volume of financial transactions in relation to the underlying business, the greater the risk of such amplification.

Nikolaus von Bomhard, CEO of the reinsuring giant Munich Re, feels that speculation in food commodities isn't entirely harmless. "There is a limit at which additional liquidity no longer creates additional value," he says.

Munich Re doesn't invest in food commodities, nor does it offer any derivatives to hedge against risk in food production. As a result, the company avoids the risk of ever being labeled a villain if food prices shoot up and it can be demonstrated that the financial industry was responsible.

Deutsche Bank, under Fitschen's leadership, recognizes that the business is not without risk. But it also apparently believes that the risks are negligible. 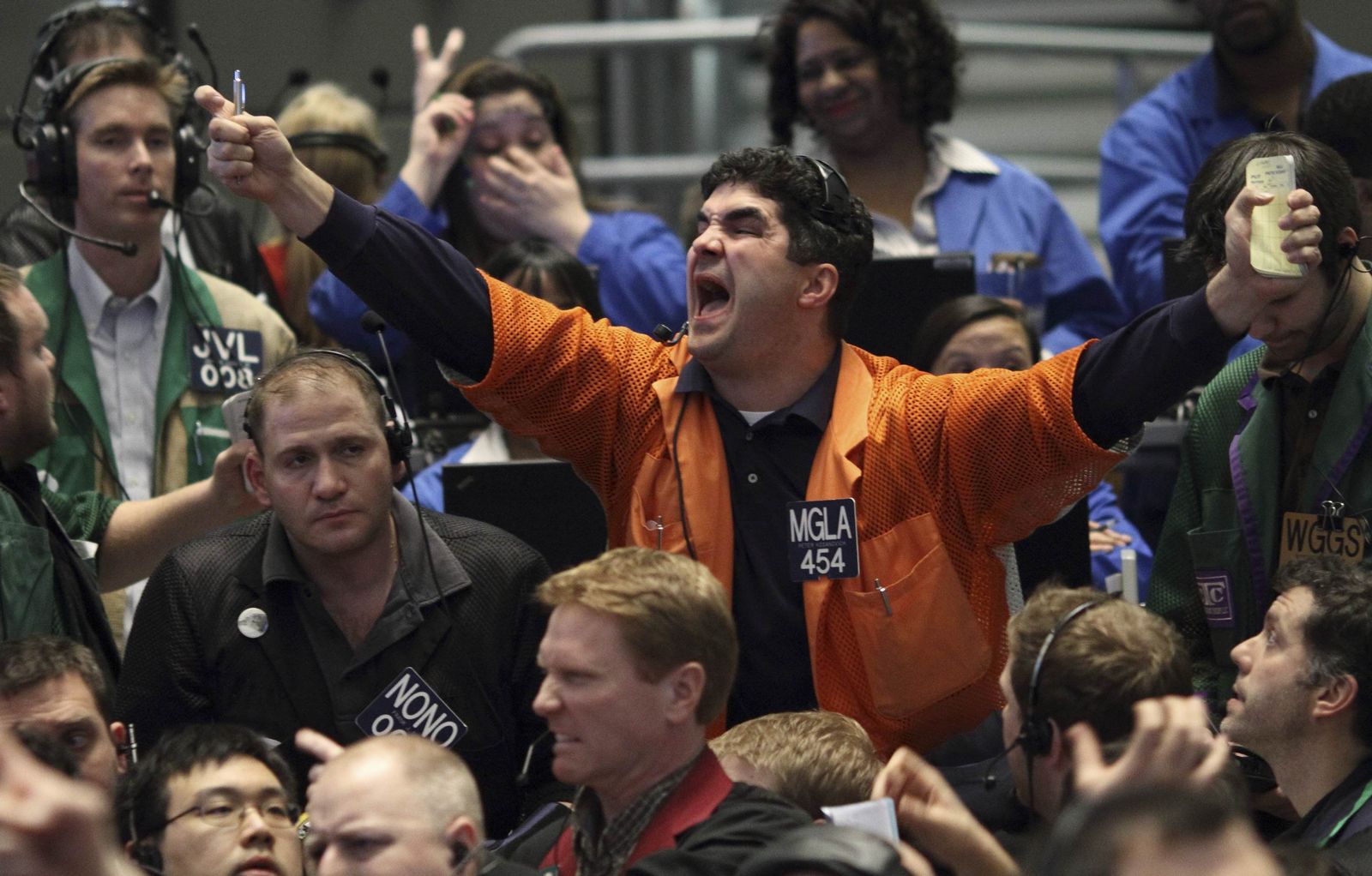 Traders work the pit at the Chicago Mercantile Exchange.