An opera premiere is always a social occasion, including in Munich. A new production of Mozart's "La clemenza di Tito" at the State Opera on February 10 was attended by a host of industry leaders, from Linde CEO Wolfgang Reitzle and his wife to Maria-Elisabeth Schaeffler, co-owner of the Schaeffler Group, and her partner. Also present were two other top managers, who appeared less interested in what was happening onstage than in shop-talk: one was Paul Achleitner, head of Deutsche Bank's supervisory board, and the other was Peter Löscher, former CEO of Siemens.

They shared a secret -- they both likely already knew a bit of news that would only become public 10 days later: Deutsche Bank had unexpectedly reached an agreement with the Kirch Group, ending a legal battle that had lasted more than a decade. Achleitner was one of the main driving forces behind the deal, while Löscher sits on the supervisory board, which was informed last Wednesday of the €900 million ($1.2 billion) settlement.

The bank was brought to its knees by pressure from public prosecutors, who are also investigating co-CEO Jürgen Fitschen and four other former management board members for attempted fraud in connection with the Kirch case.

But no one is exactly relieved. The resolution of this landmark dispute is too ignominious an outcome for the mighty bank. It was humiliated by Kirch's lawyers and the court. The public will remember this settlement as an admission that Deutsche Bank and its then-head Rolf Breuer, who in early 2002 cast aspersions in a TV interview on Kirch's creditworthiness, did indeed have a hand in the collapse of the media concern.

Achleitner, Fitschen and his co-head Anshu Jain also know that the settlement does not mark the end of the drama. The supervisory board will have to take recourse against Breuer for damages. The board might do its best to reach an agreement quickly, but the outcome is by no means a given. Bank sources say that erstwhile associates of Breuer, including former SAP head Henning Kagermann, still stand by him.

Nor can Deutsche Bank's board take the support of its shareholders for granted. A few investor representatives are already grumbling that it hardly need have taken so long to reach such a costly settlement. Former CEO Josef Ackermann had negotiated a similar deal two years ago, but back then, the entire board voted against the deal, not least for fear of the response from shareholders.

So why exactly did the board vote unanimously in favor of this settlement, even though it will cost the bank well over €100 million more?

Public prosecutors have been accelerating the investigation since last autumn. First, it was revealed that the authorities were not only investigating former board members but also Fitschen. In late January, Christiane Serini, the prosecutor in charge, let the bankers know that the files showed very clearly that Deutsche Bank had most certainly been interested in doing business with Leo Kirch -- contrary to what former managers had told the court. As CEO, Fitschen had backed up their incorrect version of events. Now, based on the investigation files, Germany's Federal Financial Supervisory Authority (BaFin) recently began looking into the possibility of stripping Fitschen of his license to head a credit institute.

Stephan Leithner, a close confidant of Jain's, might soon find himself in a similar predicament. For the time being he is not being investigated, but as general counsel, he has been in charge of managing the case since June 2012. According to malicious gossip, Jain and Achleitner slammed the brakes on the settlement to protect Fitschen and Leithner and prevent the company's leadership from coming undone.

In fact, there were many possible paths out of this self-inflicted mess. The Frankfurt bankers could have withdrawn their complaint from the German Federal Court (BGH). This would have meant that the decision of the Higher Regional Court (OLG) was final and an even more expensive settlement might have been due.

Even a win at the BGH would not have done Deutsche Bank much good. The damages claim would have been referred back to the OLG. Had Fitschen and his friends rejected the investigators' suspicions with brand new arguments, their flip-flopping would have done nothing for their credibility.

Everything therefore pointed towards the settlement -- which benefits Fitschen, first and foremost. Given that the bank is covering the Kirch heirs' legal costs as well as the interest on the delayed damages payment, the charges against Fitschen might end up being reduced to a mere administrative offense.

The four former members of Josef Ackermann's board, meanwhile, are all facing prosecution.

As far as the public is concerned, the settlement has one major drawback. Even though the case has dragged on for over 12 years, one of its key questions will never be clarified by a high court: Who actually was responsible for Leo Kirch's bankruptcy? 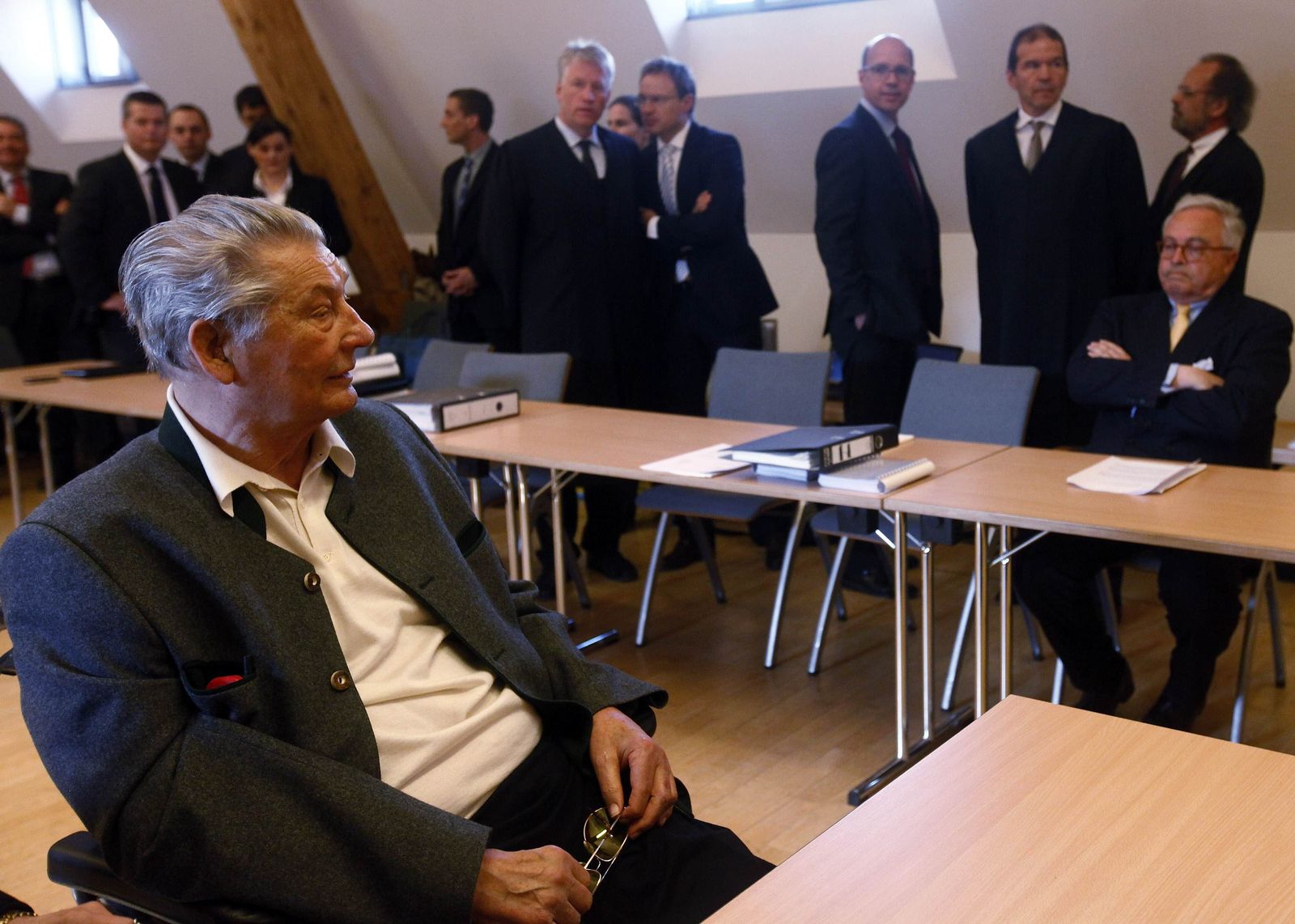 The late Leo Kirch (l) brought a lawsuit against Deutsche Bank's former CEO Rolf Breuer (r) and Deutsche Bank over comments made by Breuer in 2002 about the creditworthiness of Kirch's media group.