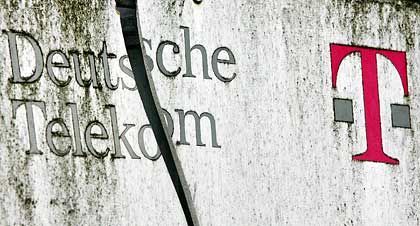 New testimony is putting cracks in the stories of former DeutscheTelekom executives who claim to not have known about monitoring mobile phone communication.

Troubling new details have emerged in the spying scandal surrounding German telecommunications giant Deutsche Telekom. According to information obtained by SPIEGEL, a lawyer hired to advise the company has told the public prosecutor's office that then company CEO Kai-Uwe Ricke and supervisory board head Klaus Zumwinkel knew that the company was rifling through telephone records as early as September 2005 and that they were "unaware of the fact that they were doing something wrong."

The business daily Handelsblatt also reports Monday that the company may not just have spied on supervisory board members and journalists, but also might have hired a private investigation firm to monitor the bank accounts of Telekom employees and their dependents.

In May 2008, allegations surfaced in SPIEGEL that the telecommunications giant rifled through the mobile telephone records of journalists, management-level employees and members of the company's advisory board from 2005 and 2006 in an attempt to figure out who was leaking sensitive company information to the press -- information that found its way into business magazines and newspapers. The company is also thought to have used mobile phone signals to keep track of the journalists' locations.

Although the company admitted to having accessed the phone records soon thereafter, Zumwinkel and Ricke both denied knowing anything about the spying. Public prosecutors in Bonn are now investigating the two former executives and trying to determine whether the company violated laws protecting the secrecy of telecommunications and data-protection regulations.

The suspicions of Ricke's and Zumwinkel's complicity in the affair stem from testimony, obtained by SPIEGEL, from Michael Hoffman-Becking, a professor at the University of Bonn and well-respected lawyer. Should the testimony be substantiated, it will undercut Zumwinkel's and Ricke's claims of ignorance in addition to lending more credence to other allegations against Telekom.

According to testimony Hoffmann-Becking provided to the Bonn prosecutor's office, Zumwinkel telephoned him on September 28, 2005 and asked him if he would be willing to provide a second opinion -- in addition to that of the in-house legal staff -- about a sensitive internal matter. The matter involved how Zumwinkel should confront the target of an internal investigation who was suspected of providing sensitive company information to journalists.

After agreeing to help, Hoffmann-Becking learned the rest of the details from Klaus Trzeschan, the former security chief of Deutsche Telekom, who said that Ricke had ordered him to launch an investigation of telephone records to find the source of the leak.

It later surfaced that the investigation of telephone records was outsourced to Network Deutschland, a Berlin-based consultancy agency. Telekom also hired a detective agency to plant a mole in the newsroom of the business magazine Capital. Using information collected from these sources, Telekom identified the alleged source of the leak as Wilhelm Wegner, a member of the supervisory board, and Rheinhard Kowalewsky, a journalist working at Capital. The same detective agency was later found to have been involved in employee spying scandals for Deutsche Bahn, Germany's national railway operator.

In their interactions, Trzeschan also allegedly revealed to Hoffmann-Becking that Telekom's KS 3 special security section had already successfully handled a number of other sensitive projects, including one involving a leak on the supervisory board of Lufthansa, Germany's flagship airline, in 2000. According to Hoffmann-Becking, Trzeschan described this as "a favor for colleagues" and mentioned the name Hagge.

In May 2008, the Financial Times Deutschland reported that Telekom hired a detective agency -- founded by former members of the Stasi, the East German secret police -- to spy on its reporter Tasso Enzweiler in 2000 in an effort to figure out who his source was for sensitive company information and might have even filmed him with hidden cameras. In 2001, an employee representative on Lufthansa's supervisory board left the company. His name was Holger Hagge. If Hoffmann-Becking's claim is correct, it would mean that Telekom's snooping began in 2000 rather than in 2005.

According to SPIEGEL information, Hoffmann-Becking also told the prosecutor's office that he met with Zumwinkel and a confidant on October 7, 2005 to continue discussing the Wegner matter. In his notes from that meeting, Hoffmann-Becking allegedly wrote down "check on legality," perhaps implying that either Zumwinkel or his as-yet-unnamed assistant voiced concerns about whether their in-house investigation might be breaking the law.

Hoffmann-Becking also says that he met with both Zumwinkel and Ricke in Bonn on October 19. According to Hoffmann-Becking, it was during that meeting that Ricke handed out a memo whose first paragraph mentioned a 2000 episode in which telephone information was "sought out and saved" at the same time that "a member of the supervisory board of another German company" had been leaking "confidential information."

During that last meeting, the three also agreed that Wegner should be given a strong warning rather than be forced out. Two weeks later, Wegner met with Zumwinkel and Ricke. Despite Hoffmann-Becking's suggestion that it only be done in an emergency, the executives mentioned the telephone data they had collected on Wegner. Wegner denied passing information to the press and left the office without a word.

How Much Did They Know?

When asked about the issue now, Hoffmann-Becking told prosecutors that Zumwinkel and Ricke had no "awareness of the fact that they were doing anything wrong."

When questioned on the matter in an internal probe in May 2008, Trzeschan admitted that Zumwinkel and Ricke had instructed him to investigate the source of the leak of company information. But he added that neither of them was informed of the precise way in which those leaks were being pursued.

Since the scandal broke, Germany's Federal Office of Criminal Investigation (BKA) has been sifting through two truckloads full of seized Telekom files, documents and computers. The prosecutor's office has yet to publish its over 5,000 pages of information related to the investigation. But in a memo from January 8, the BKA claims that Zumwinkel and Ricke "knew by October 2005 at the latest" about the methods used to investigate the leak.

But before the case has even gone to trial, some in the company have already passed judgment on the former executives. For example, in an e-mail from last August, Telekom's head lawyer and now member of the management board Manfred Balz wrote that Zumwinkel, Ricke and Trzeschan had committed a "deliberate transgression against what was objectively the right thing to do." The company is also demanding nearly €1 million in damages from both Zumwinkel and Ricke.

Current Telekom CEO René Obermann took over the position from Ricke in November 2006. In an interview with SPIEGEL from June 2008, Obermann claimed that he did not learn of the data abuse until August 2007 and immediately asked for an internal investigation to be launched. The Berlin-based company charged with monitoring managers and journalists submitted a bill for €359,000 in the fall of 2006, and the bill was paid on November 23, 10 days after Obermann took over. But he denies having ever known about the bill and looks back upon the period as "turbulent and stressful."

Zumwinkel and Trzeschan have more than their former coworkers' disapproval to deal with. In January, Zumwinkel was sentence to a €1 million ($1.35 million) fine and given a suspended two-year sentence for tax evasion after investing money in a Liechtenstein-based foundation so as to avoid paying German taxes. The charges led to his ousting as CEO of the former German postal monopoly Deutsche Post. Trzeschan has been charged by Telekom with misappropriating €355,000 in company funds, some of which was allegedly used to pay the company mole at Capital.

The extent of the Telekom scandal threatens to spread even broader than the company's management halls and journalists' offices. According to a report Monday in the Handelsblatt business daily, the prosecutor's office has evidence that suggests that, for several years, the security department at Telekom contracted an outside company to examine bank account information of employees and their families. The paper says that the snooping appears to have begun in 2001 and involves employee accounts at Deutsche Bank, Postbank, Hypo Real Estate and even some foreign banks.

When questioned about the possible spying on employees, a Telekom spokesperson told the paper that internal investigations had revealed no indications of such activities, but that they could nevertheless not be discounted.