They were three young, hung-over Swedish men who had been out drinking the night before to drown their sorrows -- and they had an idea. They sent an e-mail to North Korea. The subject line read: "Investing in the Democratic People's Republic." More than two years later, a shipment of 1,100 designer jeans arrived in Stockholm. There were two models -- "Kara," a slim fit, and "Oke," a loose fit -- and they were made in Pyongyang.

This is the story of an experiment. How does one gain access to one of the most sealed-off countries in the world? In the digital age, North Korea is the last remaining bit of terra incognita in the Worldwide Web. Whereas Jakob Ohlsson, 23, Tor Rauden Källstigen, 24 and Jacob Aström, 25, spend a lot of time online, and they are never without their laptops.

On that July 20, 2007, the three Swedes were skimming North Korea's "official Web page" and discovered a new button, titled "Business." After only two mouse clicks, they found themselves looking at a list of possible North Korean export goods: cosmetics, trucks, marble, weapons, mineral water, fire extinguishers and -- jeans. They wrote to the contact address, claiming that they were import-export managers for a fictitious company, and they waited. Less than 24 hours later, a friendly Mr. Sapmak wrote back and thanked them for their interest. It was the beginning of "Noko Jeans."

In November 2007, the three Swedes made their first telephone call to the North Korean Embassy in Stockholm. Ohlsson said: "I'm calling from Stockholm." The embassy spokesperson replied: "That's nearby. We also live in Stockholm." Ohlsson: "We have started this company" Embassy spokesperson: "It'll be Christmas soon." Otherwise, the North Koreans promised the Swedes whatever support they could provide. The three Swedes brought along Ohlsson's father, a suit-wearing dentist, to their first meeting to add an aura of credibility.

In December 2007, they gave a North Korean delegation two sample pairs of jeans, including a used pair owned by one of the three Swedes, for inspection at a textile factory in Pyongyang. In the spring of 2008, they sent the North Korean Embassy a wish list for their upcoming trip to the North Korean capital: a visit to a computer center, meetings with ordinary young people in Pyongyang and "mass games," a North Korean specialty which sees huge numbers of performers take part in highly choreographed spectacles.

The embassy replied with its own agenda, which included visits to the mausoleum of the "Great Leader," former President Kim Il-sung, a statue of the Great Leader and the Great Leader's collection of gifts from foreign dignitaries, including a bear's head from former Romanian President Nicolae Ceausescu, a crocodile leather suitcase from former Cuban President Fidel Castro, and a bulletproof limousine from former Soviet dictator Joseph Stalin.

On July 27, 2008, when the Swedes arrived in Pyongyang on a train from Beijing, their minders met them at the station: Mr. Dong, Ms. Lee and a man who was introduced as "Mr. Driver." They spent their first evening together in the karaoke bar at the Koryo Hotel, which would later serve as the inspiration for the names they gave their two models (Kara and Oke). At the bar, the Swedes and their hosts alternated between singing North Korean marching songs and Beatles songs, and the evening ended with a joint version of "Night in Pyongyang," a ballad often played on the state-owned radio network. The Swedes were familiar with the song from the Internet.

They spent the next 10 days visiting textile factories, but without success. They did manage to fit in a trip to the terrarium at the Pyongyang zoo, to which a Swedish TV star had once donated used equipment and a few wild animals. The three Swedes thought that even the crocodiles looked sad.

On their last day in North Korea, they finally met the director of a mining operation that included both a zinc processing and a textile division. The deal was sealed with a handshake, a group photo and Swedish vodka. They decided on black jeans. The Swedes had discovered that the North Koreans were hesitant to produce blue jeans, apparently because they were perceived as an American symbol. On the other hand, the director was very interested in the possibility of the young foreigners perhaps creating a Web page for his business.

A year later, in the summer of 2009, the Swedes, who worked for a marketing company, returned to North Korea to ensure that the North Korean women who worked in the factory, wearing red work coats and red caps, were sewing correctly. They were, but unfortunately they were missing the buttons, which had become stuck somewhere en route from Pakistan to Pyongyang.

On Nov. 11, 2009, the jeans finally arrived in Stockholm, but then the experiment turned into a problem. The department store where the Swedes had planned to sell their Noko Jeans from North Korea refused to cooperate, claiming that it didn't want to become involved in politics.

A public debate erupted in Sweden over whether it was ethically permissible to produce jeans in a dictatorship that confines its own people to labor camps and threatens the world with nuclear weapons.

The three Swedes have since become more cautious about the things they say. "We don't believe in isolation," they say. "We believe that any outside influence can only be a good thing for such a country." And they say: "We aren't a fan club for North Korean policy." They say that they saw the human beings behind the mass games, and that they made friends in North Korea, including Ms. Lee. They say that everything is so tremendously complex.

But this is also a story of self promotion. The Swedish trio has just opened its own shop in Stockholm -- which includes both jeans and a museum of North Korea. They seem to have learned all about propaganda in Pyongyang. 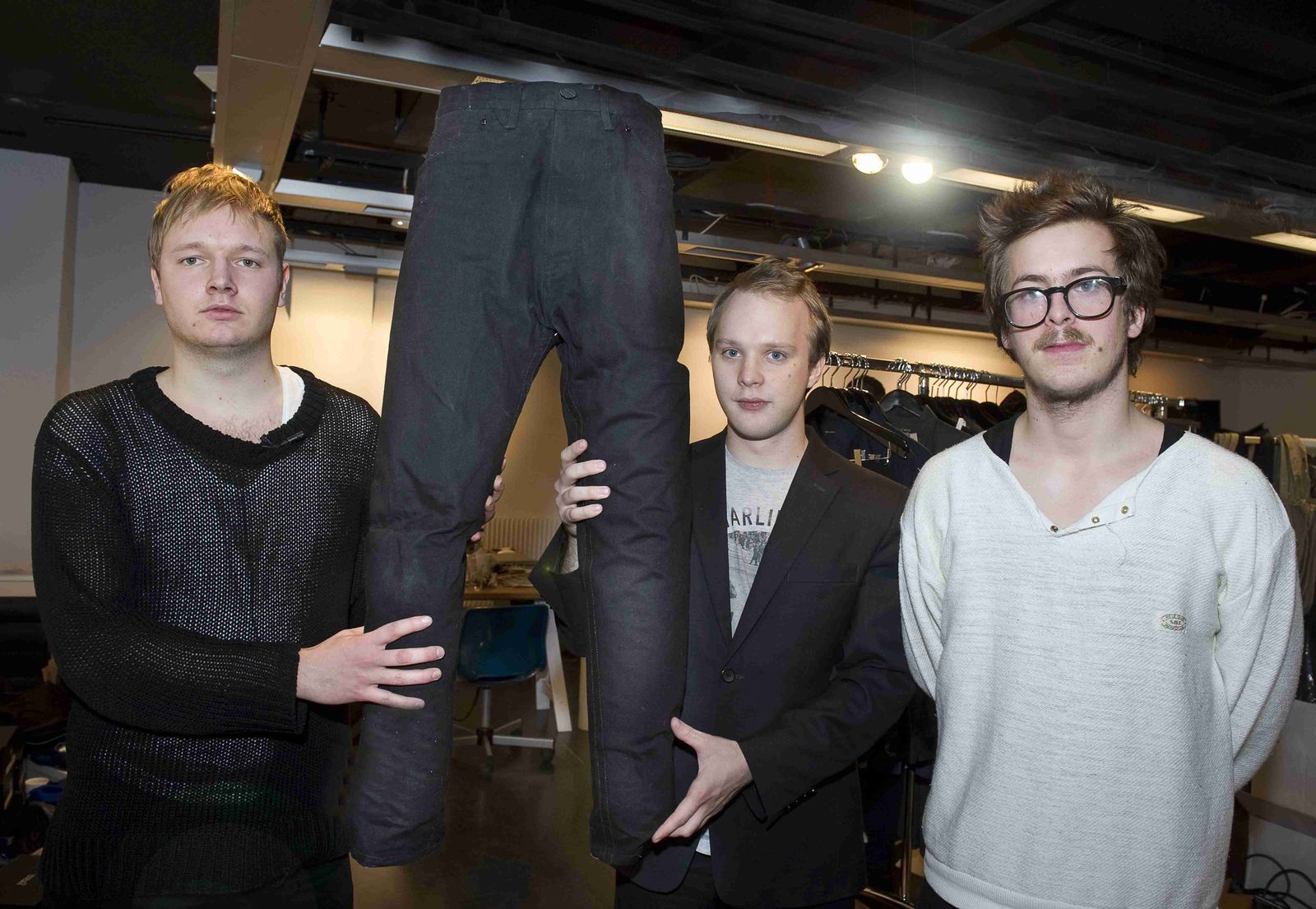 Noko Jeans founders, from left to right, Jakob Ohlsson, Tor Rauden Källstigen and Jacob Aström with a pair of their jeans produced in North Korea.