The 2010 World Cup is getting a taste of eastern Germany with its soccer.

For the first time in its 137-year history, Hasseröder, a beer brewed in eastern Germany, little known outside its home country, will bear the title of Germany's official beer for the 2010 World Cup in South Africa.

The World Cup beer title is a privilege that has been reserved for American brewing powerhouse Anheuser-Busch since 1986. The St. Louis brewer was happy to share the rights in 2010 after being acquired last year by global brewer InBev, which also owns Hasseröder, for $52 billlion.

"This is a once in a lifetime opportunity for the brand. I think it will be an excellent chance to grow further in Germany," Erwin Dito, marketing chief for InBev Deutschland, told SPIEGEL ONLINE.

Taking advantage of a good situation, Hasseröder plans to launch a nationwide television, print and Internet advertising campaign in January. The TV campaign will feature five beer-loving guys, called "Die Fünf Jungs," who have appeared in previous Hasseröder ads. On the Hasseröder site, fans will be able to find all the latest scores and news about the World Cup. Hasseröder also plans to host out-door events for public viewing mostly in eastern Germany, where its core drinkers reside, Dito says.

Some lucky Hasseröder-drinking soccer fans will even get the opportunity to travel to South Africa during the World Cup and see the German team play live. Dito says the brewery plans to hold a competition to determine which fans get to go to South Africa in 2010.

After reportedly paying $40 million to sponsor the tournament, Anheuser-Busch, still an independent company at the time, found itself on the wrong end of vehement protests from German beer drinkers. They called the beer, which has a lighter flavor than German beer, "dishwater," and were so offended by the prospect of drinking American beer that they even set up a Web site with a picture of an American eagle, the symbol of the brewery, vomiting.

Making matters worse, Anheuser-Busch couldn't use the terms "Budweiser" or "Bud" in Germany because of legal trademark battles with Czech brewer Budweiser Budvar and German brewer Bitburger, respectively. Bitburger's popular German brew goes by the name "Bit," which is similar enough to "Bud" to fuel the conflict. Instead Budweiser in Germany goes by the name "Anheuser-Busch Bud."

Anheuser eventually relented and allowed Bitburger to be served in German stadiums alongside Budweiser during the games, albeit in unmarked cups. In return, Bitburger said the brewer could use the word "Bud" in on-field advertising.

Marc-Oliver Huhnholz, spokesman for the German Brewers Association, says Anheuser-Busch learned a valuable lesson about the German market from its experiences in 2006: Namely that "Germans really love to drink German beer. Foreign beers have very little success here," Huhnholz told SPIEGEL ONLINE. In order to crack the German market, foreign brewers are better off acquiring or partnering with German brewers such as Hasseröder, he adds.

Today as a subsidiary of InBev, Anheuser-Busch seems to agree. With a host of beers from around the world in its portfolio, including German brews Beck's, Hasseröder and Franziskaner, the combined entity, Anheuser-Busch InBev, is making the most of its FIFA sponsorship this year to get more Germans drinking its beer.

'For the Local Brand to Shine'

"We are maximizing our sponsorship in order to connect with beer drinkers. In certain markets where our global flagship brand is unavailable, or one of our local brands already has an existing football association on par with the passion of World Cup, we believe the added flexibility, such in the case of Hasseröder, allows us to further bring a truly amazing global event even closer to home," said Eelco van der Koll, Global Director of Sports & Entertainment for Anheuser-Busch InBev, in a statement to SPIEGEL ONLINE.

Dito of InBev Deutschland also sees the logic. Since Budweiser doesn't play a role in Germany, Dito says this sponsorship is "a chance for the local brand to shine."

Still, despite help from the world's most-watched sporting event, Hasseröder still has a tough road ahead in continuing to grow its volume in Germany. Germany's obsession with beer is waning. Its society is aging, and that means they are drinking less beer. Younger Germans have also begun showing a preference for cocktails. The result: Germans are now drinking 111.1 liters of beer per capita each year, down from 150.9 liters in 1976.

"The cake is always shrinking, but everyone is still trying to cut the same size piece," says Huhnholz. 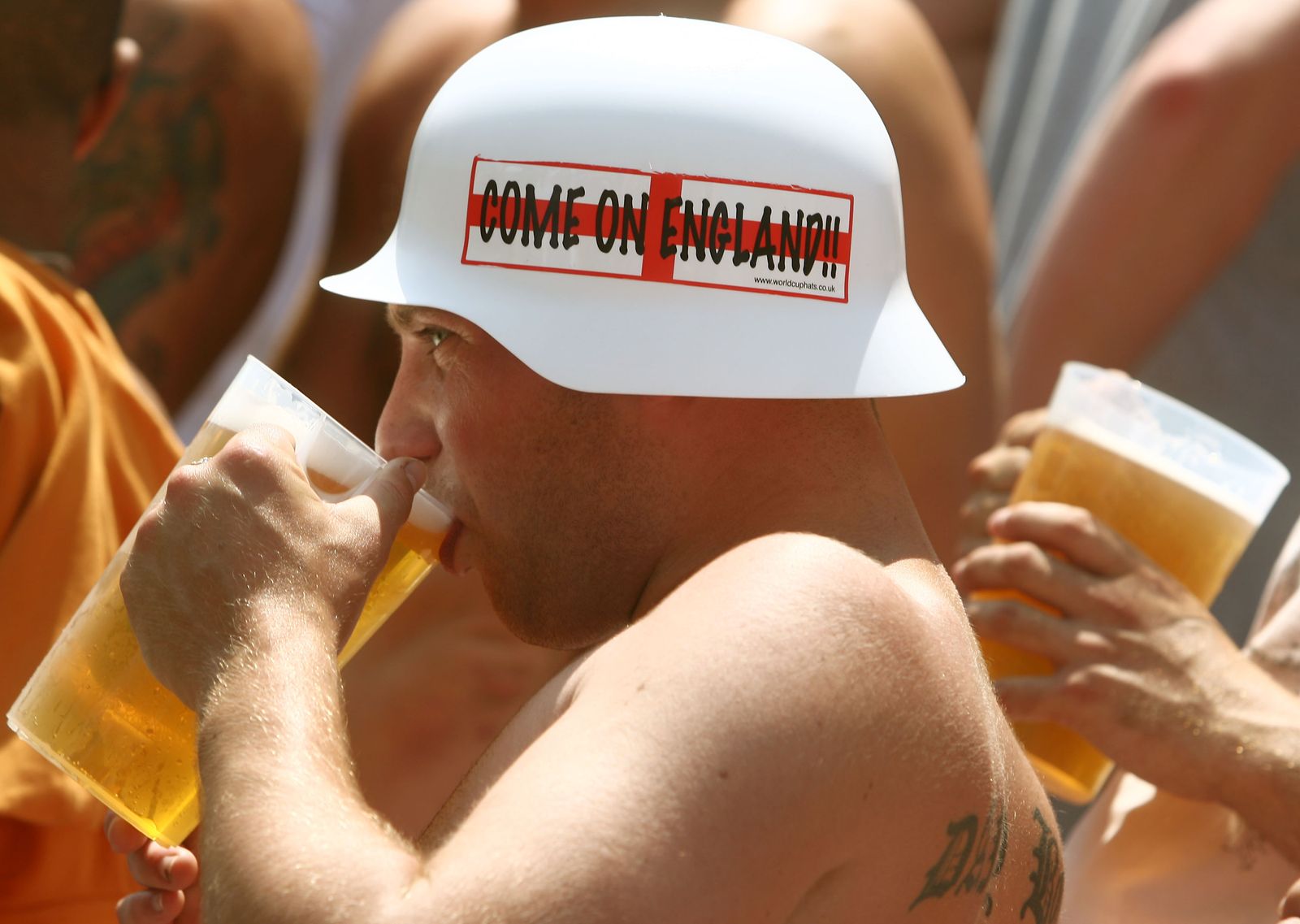 An English World Cup fan slaking his thirst at a 2006 match in Germany.