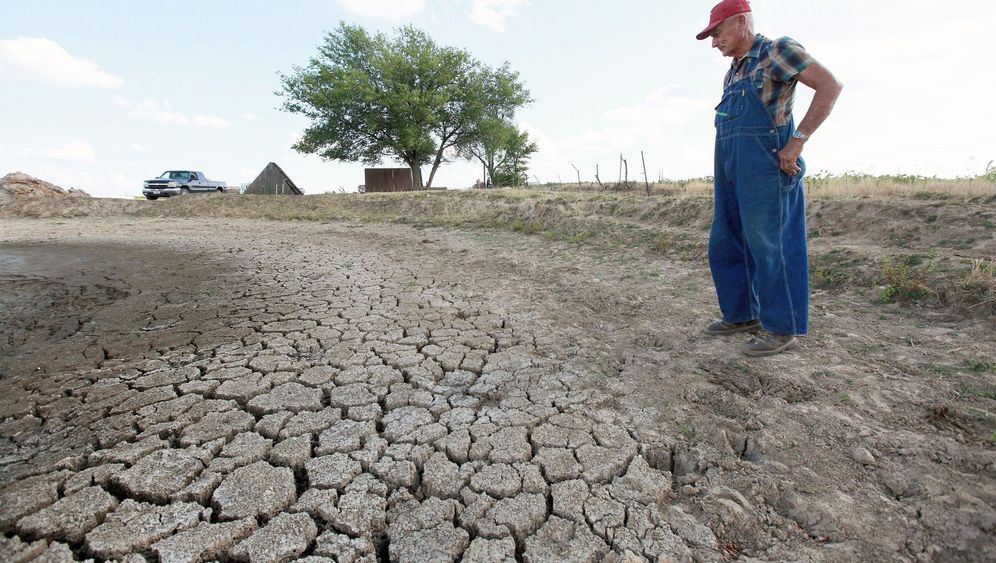 Farmer Mike Geske speaks with the experience of generations. "Every major drought has its very own character," he says. It's a lesson derived from his family history. His grandfather, an immigrant from Germany, established a farm in Matthews, Missouri, and his father expanded it. Both related to Geske, now 62, several stories about droughts and what they did to keep the farm going.

This year's severe drought, says Geske, has been unusually long and hot. "It started in May of last year. First it rained like crazy. But then, suddenly, it was as if someone had turned off the water," says Geske.

The land around Matthews is as flat as a board. Geske, together with his son and two employees, farms 850 hectares (1,870 acres). The corn harvest began last week -- and the cobs don't look good, even the ones from those plants Geske has been able to irrigate. The kernels are small and there are wide gaps between them.

It is the same story across the American Midwest, which is experiencing its worst drought since the 1930s. One-sixth of the corn crop has been lost and the soybean plants and wheat stalks don't look much better. Shortages and rising prices for essential commodities are the result.

Some prices have soured by almost 50 percent within just 10 weeks, and grain warehouses are beginning to empty out. Other important supplier countries also anticipate poor harvests. Because of a prolonged dry period in Russia, wheat exports are expected to be only half of what they were last year. Brazil, on the other hand, has had too much rain, which is bad news for sugar-cane farmers. "The latest crop predictions suggest that we should fear the worst," the United Nations World Food Programme warned last week. It is the third such warning in recent years, following similar crises in 2008 and 2011. Catastrophe, it would seem, is becoming the norm.

Sudden spikes in the prices of wheat, soybeans and corn threaten the wellbeing of every individual. Economists warn of "agflation," or inflation triggered by a rise in the price of agricultural products. Poor nations, however, are disproportionately affected because people there spend a larger share of their income on food. But consumers in the industrialized world will also feel the effects.

Mills, forced to pay high prices for wheat and other grains used in making bread, pass the added cost on to bakers. The bakers' suppliers also charge more for ingredients like nuts, poppy seeds and margarine, says Amin Werner, head of the German Bakers' Association. "This can't be ignored, which is why consumers will also notice."

The G-20 has also taken notice, and plans to hold a meeting this autumn to address the crisis. First and foremost, the group of the world's strongest economies and developing nations wants to prevent countries from taking unilateral action. Two years ago, Russia temporarily suspended wheat exports, which only drove prices up even further. This time, countries like Argentina and Brazil could follow a similar path and curb their soybean exports, fears Bonn agriculture professor Ernst Berg. This would decrease supply even further. "The crisis will only get worse," Berg predicts.

Securing the food supply is becoming a key issue on the international agenda, now that a global battle for agricultural commodities has erupted. "Food is the new oil," says Lester Brown, founder of the Washington-based Earth Policy Institute, "and land is the new gold." Politicians and citizens are worried about how the food supply can be guaranteed in the future -- and at what price. Four factors play a critical role here:

Many climatologists predict that in a warming world, heat waves like the one in the United States this year will become more frequent and more severe. In a new study, agricultural economists at New York's Columbia University predict that, if the climate models turn out to be true, extreme heat could reduce crop yields in the United States by about 30 percent.

The world must be prepared for the consequences of climate change varying greatly by region, with yields shrinking in some areas and growing in others. Regions of Scandinavia that were once cold and barren will likely turn into breadbaskets. The losers will include current centers of agricultural productivity like southern Spain. The vegetation belt in Africa will also shift, with the Sahara becoming greener and severe droughts becoming more common in the south.

Since 2005, US refineries have been required to add fuel derived from renewable sources to conventional gasoline. The United States is using this approach to reduce its dependency on fossil fuels. The problem is that the country is now using more corn to produce ethanol than to make animal feed.

About 40 percent of the corn crop is converted into biofuel, and less and less farmland is available to grow other crops. Investment firm Lupus Alpha is critical of Washington's environmental strategy because by subsidizing ethanol, the government has created a "demand monster." The UN Food and Agricultural Organization (FAO) argues that the ethanol requirement should be suspended immediately so as to defuse the "food versus fuel" conflict.

Today German farmers use 2.2 million of the 16.7 million hectares they farm to grow plants for the production of biofuel. German fields are bright yellow in the spring, from rapeseed plants, while corn dominates the landscape in the fall. The amount of land devoted to such crops could grow to 4 million hectares by 2020.

Several politicians from Merkel's conservatives are supportive of Niebel's call for a ban on E10 sales. "It's unacceptable that people all over the world are suffering from hunger, while we incinerate biomass to make inefficient energy," says senior conservative parliamentarian Michael Fuchs.

Since the beginning of the agricultural crisis in 2008, there have been price surges that cannot be explained by normal factors. Market prices for rice, for example, sometimes shoot up by 30 percent in a single day.

Such movement is likely the result of financial market speculation. Investors, especially investment banks and pension funds, don't trade in real goods. They have no interest in physically owning corn, soybeans or wheat. By entering into futures contracts, they are merely speculating on changes in the prices of food commodities. Trading in agricultural commodity futures almost tripled between June and July.

Growing demand causes futures prices to rise, which ultimately affects the real market -- which is precisely the problem. Many studies show that futures contracts affect prices on real markets, and experts only disagree on how large the effect is.

Criticism of making money in a way that ultimately exacerbates hunger has convinced a few banks to rethink their approach. Three German banks, Commerzbank, Deka-Bank and Landesbank Baden-Württemberg have decided to stop engaging in speculation related to agricultural commodities. But according to aid organization Oxfam, the big players are not following suit, including German insurance giant Allianz and Deutsche Bank, which have €6.2 billion and €4.6 billion, respectively, invested in food commodities speculation.

To undermine speculation, experts propose the establishment of a sort of central bank for grain. Under the plan, the important agricultural countries would establish a joint reserve. In the event of sudden price spikes, they would be able to throw grain onto the market to bring down prices and force speculators out of the business.

In emerging economies, a new middle class has developed whose members have completely different eating habits than their parents' and grandparents' generations. Meat is no longer the luxury it once was.

China, in particular, is leading the charge. In the two decades since 1990, Chinese annual per capita income has risen from the equivalent of $341 to $5,400. In the same period, annual meat consumption has more than doubled, from 26 to 56 kilograms.

Domestic agricultural production is far from sufficient to cover such a rise in demand, especially for animal feed, so China has turned to the world markets for soybeans and corn. Because about three kilos of feed are needed to produce one kilo of pork, the new eating habits are magnifying the supply problem.

More than anything, the four factors affected agricultural commodity prices indicate not only that the situation is tense, but that it is also likely to stay that way. The global population grows by some 78 million people a year, and while the demand for food is constantly increasing, the supply is limited. The amount of land currently under cultivation worldwide -- about 1.5 billion hectares -- can hardly be expanded.

Still, Bonn agricultural economist Berg is convinced that it is possible to feed every inhabitant of the earth, and will be even in the year 2050. "To be able to feed the nine billion people that will likely be living on the planet at that point, we'll have to double our current agricultural production, which is theoretically possible," says Berg. To do so, agriculture would have to increase productivity reserves worldwide, by using the best grain varieties, more efficient irrigation and powerful machinery. There is enormous potential, as evidenced by the fact that Russian farmers produce 1.9 tons of wheat per hectare, compared with German yields of 7.8 tons, or almost four times as much.

Genetic engineering is also one of the tools that promise better crop yields in a limited amount of space, by producing more drought-tolerant plants, for example. But society still has substantial reservations about the technology.

Moreover, not all experts are as optimistic that the agricultural crisis can be solved with more technology, biology and chemistry. On the contrary, many warn against treating the maximization of crop yields as the solution. They include the group of scientists that wrote the World Development Report four years ago.

They conclude that the superiority of industrial agriculture is a myth, and that, in reality, it is responsible in large part for climate change, species extinction, the poisoning of the environment, water shortages and disease, which ultimately makes it responsible for hunger and poverty. The report argues that monocultures, pesticide use, artificial irrigation and synthetic fertilizer contaminate water and ruin the soil. As a result, say the authors, it is better to strengthen small farmers, who concentrate on local markets and use less water than large-scale farming operations. They also believe that these small farmers are easily capable of satisfying demand in developing countries.

Perhaps, though, altogether different measures are necessary in the fight against hunger. Another front line runs through our kitchens: A third of all food, after all, ends up in the garbage.