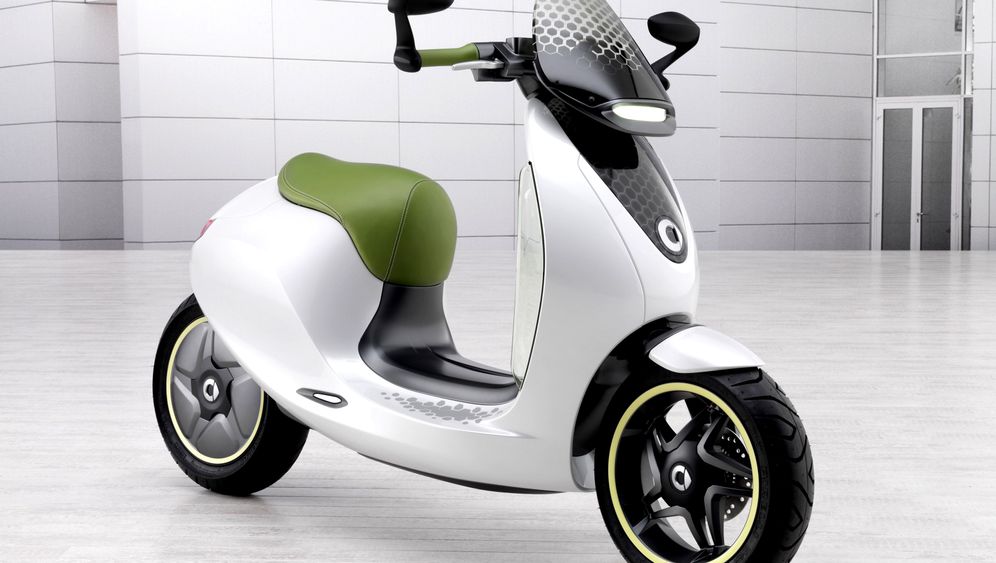 If one didn't know any better, one could almost believe the sight before their eyes was the result of a successful cooperation between archrivals Dieter Zetsche, head of Daimler, and Norbert Reithofer, the boss at BMW. The shared traits in products being exhibited by the German competitors at the Paris Motor Show, which opens next week, are astounding.

The new Mercedes CLS and BMW's 6 Series models for example, are conceptually very similar. And even more curious: The two companies' small car brands -- Daimler's Smart and BMW's Mini -- are each planning to introduce electric scooters. In the hunt for new revenue channels, young customers and plausible ideas for electric mobility, both have apparently come to the same conclusion: It's time to produce a new generation of scooters.

The technology behind scooters is relatively simple, so Smart and Mini are both focusing largely on design. "We have built many of the features of our automobile lines into the scooters," said Mini's chief designer Gerd Hildebrand. Currently, three different models are being created under his tutelage -- an anglophile version for modern-day mods, an Ego model for snobs and an eco-version with the same color scheme as the Mini E electric car.

"They all share the same organic form -- they all have the small wheels that protrude outwards and ball-shaped headlights that people know from the Mini," Hildebrand said, describing what the four-wheel Mini and its two-wheel counterpart have in common.

The scooter also features the same turn-signal and light switch used in the car, an oversized speedometer and a charging plug that can be pulled out of the scooter's body, in a similar fashion to the power cord on a vacuum cleaner. The scooter also has a number of small storage compartments for sunglasses, mobile phones and other accessories.

Smart is also using the colors and forms used in its Fortwo automobile for its scooter model. The Daimler scooter is coated in two colors and has interchangeable body parts made of plastic. The Smart scooter also has considerable storage space, a folding seat for a second passenger and a striking windshield for the driver.

So far the manufacturers have shared few details about the scooters' electric engine technology. In both cases, the motor is located behind the rear axel. Mini designer Gerd Hildebrand spoke solely of the "driving performance expected" in the category, with a maximum speed of around 50 kilometers (31 miles) per hour and a maximum range on a single charge of around 100 kilometers (62 miles). The Smart model uses a direct current hub motor, has 5 horsepower and can reach speeds of 45 kilometers per hour. Daimler also estimates a maximum range of 100 kilometers and a battery charging time of three to five hours. The Smart, however, requires a separate cable to provide energy to the charging socket, which is located beneath the headlight.

The advantage of electric scooters over electric cars is that engineers don't have to busy their heads with pesky questions of limited range or battery weight. The technology for electric scooters is largely mature, with millions already being driven in China today.

What has changed in both scooters are the classical instruments, which are absent. Instead, the Smart model includes an iPhone on the handlebars, which serves as the on-board computer, navigation system and jukebox. Smart has also come up with further nifty additions, like LED head- and rear lights, ABS braking, an air bag and electronic monitoring of blind spots for the driver -- features not normally seen on scooters.

The scooters aren't revolutionary; electric two-wheelers are already available on the market, priced at several thousand euros. But they do hint that the automobile manufacturers are coming around and rethinking their approach. Indeed, the message in Paris next week seems to be that cars alone will not be able to fulfil our mobility needs in the future.

Instead of leaving the market to established scooter makers like Peugeot or Piaggio, newcomers like Smart and Mini are preparing to seek a foothold in the sector. "With the single-track e-scooter, Smart can create new growth potential," said Daimler spokeswoman Eva Wiese. It will also allow the company to target younger consumers, since youth in Germany can drive scooters at age 16, two years before they can sit behind the wheel of a car.

It's for these reasons that there are good chances that the concept scooters shown by Mini and Smart will actually make it to the market. Smart officials said the scooter could also be connected with the car-sharing program it is testing in cities across Germany in order to make it more attractive to customers.

Over at Mini, design chief Gerd Hildebrand was even clearer in his message. "If there is interest, we could bring the scooter to the market within a few years. After all, BMW is one of the few automobile manufacturers that also has a motorcycle division."