SPIEGEL: Mr. Teyssen, you're planning to cut 11,000 jobs and close some locations - and all without informing employee representatives beforehand, as you're required to do by the Works Council Constitution Act (BetrVG). Isn't that a bit cavalier?

Teyssen: Perhaps it would be if there was something to your accusation. But we followed the rules very closely. First, I informed the supervisory council, which includes both owner and labor representatives. Then, I immediately informed executives and employees. And, of course, we will consult with the works councils on precise measures.

SPIEGEL: E.on workers had to first learn from SPIEGEL that there are plans to shut down some corporate offices and cut jobs.

Teyssen: I don't like indiscretions, either. But these kinds of disclosures can't force company executives to throw out plans to provide information in the right order.

SPIEGEL: You've pointed at the German government's decision to phase out nuclear energy by 2022 as the reason for your cost-cutting program. But that's just an excuse.

Teyssen: We only said that the phase-out influenced our dismal performance in the first half of 2011. But this isn't the reason behind the savings program. The decisive issue is that we have to make massive investments to adapt to new sources of energy. To finance this, we have to become more profitable. We aren't shifting the blame onto anyone else, and we're not saying that (German Chancellor Angela) Merkel stripped these people of their jobs. That would be rubbish.

SPIEGEL: But, Mr. Teyssen, you're the one who took their jobs away. E.on's major problem has been the poor decisions of its own management.

Teyssen: Naturally not every management decision has worked out. But how will it help us in the future if we start asking who bears what level of responsibility for old mistakes? We need to invest in renewable energies, new markets and new customer relations. That's what we need to concentrate on now.

SPIEGEL: Why only now? It was already clear where things were going in 2000, at the latest, when the coalition government of the Social Democrats and the Greens led by then-Chancellor Gerhard Schröder passed the original nuclear phase-out law. But even then E.on kept betting on nuclear power. Indeed, your company is highly dependent on atomic energy.

Teyssen: In recent years, a total of €8 billion ($11.5 billion) have been invested in renewable energy. E.on erected half of all offshore wind turbines built worldwide in 2010. One can always ask whether we should have started earlier. But one can't accuse us of having failed to change course.

SPIEGEL: Hardly any of your company's investments have been in Germany. In fact, E.on accounts for less than 3 percent of domestic investments in renewable energy.

Teyssen: When it comes to saving the world, does it make any difference where we reduce CO2 emissions? We have to get started in the locations with natural advantages. There is as much wind available on land in America as there is on the open seas off Germany. We can build up new technologies there much more cheaply and get them to the market more quickly. What's more, we haven't just stood idle in Germany: We built the first offshore wind turbine facilities, and others are currently being planned.

SPIEGEL: Last week, Jürgen Grossmann, the head of your rival RWE, admitted: 'All of us have invested too little in renewable energies.' Do you agree?

Teyssen: I have no argument with Mr. Grossmann when it comes to either his successes or his appraisals. Today, E.on belongs to a leading group of global companies operating renewable-energy facilities. For example, we are number 6 in the world in wind energy. Or course, we haven't done everything right. But we also haven't slept through it all.

SPIEGEL: That exactly what the labor representatives in your company accuse you of. Shareholders have also lost faith. In fact, after the cost-cutting plan was announced, E.on's market value dropped more than 10 percent at a certain point. That's a clear vote of no confidence.

Teyssen: To me, it's not about sparking a short-term increase in stock prices. It's about charting a fundamentally new course. To do that, one also has to occasionally expose oneself to a beating from all sides. Otherwise, one doesn't belong at the helm.

SPIEGEL: But the fact that the plan doesn't appear to go in any fundamentally new direction makes it unconvincing. Cutting jobs, merging various control centers, pushing down costs -- all of those belong to the standard repertoire of bad management consultants.

Teyssen: Perhaps it isn't all that original. But one can't refuse to take necessary and correct measures just because one didn't invent them.

SPIEGEL: Your plan is missing a second part: prospects for the future.

Teyssen: It might have escaped your notice, but of course I explained to the workforce and the public that we aren't lowering costs as an end in itself. This is what we have to do if we don't want to lower our investment level, as some of our competitors are doing, because we want to stick to our ambitious plans to invest in renewable energies and new markets. That's the second part.

SPIEGEL: You act as if E.on were some poor corporation that had to do some serious belt-tightening. But the fact is that your company will generate roughly €9 billion in pre-tax profits this year.

Teyssen: But one has to view these results after deducting the high write-downs. We just had the first quarterly loss in our history, and for years we've been making fresh investments worth more than our cash flow. That demands action.

SPIEGEL: Why don't you start with the Gazprom contracts? You negotiated long-term delivery contracts with the Russians buying gas at prices that were significantly above market level at the time. That costs your corporation about €1 billion a year. How long can you afford this luxury?

Teyssen: This problem actually needs to be solved as quickly as possible. We've already been able to successfully renegotiate some of our contracts for gas delivery with international oil and gas corporations.

SPIEGEL: But not with Gazprom, which supplies you with a major portion of your gas.

Teyssen: That's right. We held talks with Gazprom for nine months to try to get new contract provisions, but without success. That's why we're being forced to call in a neutral court of arbitration.

SPIEGEL: The Russians are reportedly demanding partial ownership of E.on in return for agreeing to any amendments to the gas contracts. Are you open to that kind of deal?

Teyssen: If it has to do with new joint matters, such as building new power stations, I'm open to discussing anything. But I find the idea of redistributing what's already there less constructive. Why should we run our power plants better or more efficiently if we aren't the sole owners of them anymore? There is little sense in that.

SPIEGEL: RWE is apparently toying with the idea of offering partial ownership to a corporation like Gazprom. Are you completely opposed to such a scenario?

Teyssen: At the moment, I can't find any sense in that kind of move for E.on.

SPIEGEL: When you became head of E.on, you announced you would use growth on foreign markets to compensate for declining profits on the German market. But not much has happened there, either. Why?

Teyssen: With the nuclear phase-out and all the political excitement in recent months, we weren't exactly underemployed. That might be why this area got a bit too little attention and wasn't pushed forward as quickly as hoped. But, in the meantime, we have decided on three target regions: India, Brazil and Turkey.

SPIEGEL: You wanted to file a court case challenging the constitutionality of the nuclear phase-out law. Was that mere saber-rattling? Either way, the law has already been enacted.

Teyssen: No. If people are going to march into battle, they prepare themselves in a mild-mannered way rather than running about the block with a bunch of hoopla. We will take all the legal steps to assert claims for the damages we're entitled to. If doing so requires us to make a constitutional complaint, we will file it. We still have a few months to do so, and we are examining it very closely.

SPIEGEL: Does that mean you really believe you can somehow torpedo the nuclear phase-out?

Teyssen: No, that's not what it's about at all. It's about the avoidable mistakes in the exit process politicians have prescribed for us. Billions in losses could have been avoided if things had gone forward with a bit more deliberation. At the same time, the turbo phase-out really doesn't change much about the safety situation. Politicians can't and shouldn't act like that. And we're not going to accept that without compensation.

SPIEGEL: Energy markets are changing all over Europe. Coal, gas and nuclear energy are retreating while renewable energies are advancing. What kind of role is left for an old-school energy company like E.on in this changed environment?

Teyssen: A leading one. Within five years, we will be considerably more decentralized than we are today, and energy will be generated in many small power plants using renewable sources as well as fossil fuels. What's more, we will operate with a significantly leaner administration.

SPIEGEL: And what about you yourself? E.on slept through the energy revolution for a long time, lost billions in the gas trade and initially built costly administrative centers. Doesn't one also have to give some thought to consequences for its executives?

Teyssen: That's obviously a valid question. I'm doing that, and I'm sure E.on's supervisory board views it as its chief duty to think about whether the right people are in the right places on the management team. So far, I haven't been able to detect any lack of faith. And I still have confidence in my own abilities to do the job.

Teyssen: That might be hard for some given the messages I just had to convey. That pains me too. But, unlike politicians, I don't position myself based on opinion polls, but on what the company needs. If my only concern was pleasing the capital market or the supervisory board, I'd be in the wrong place. 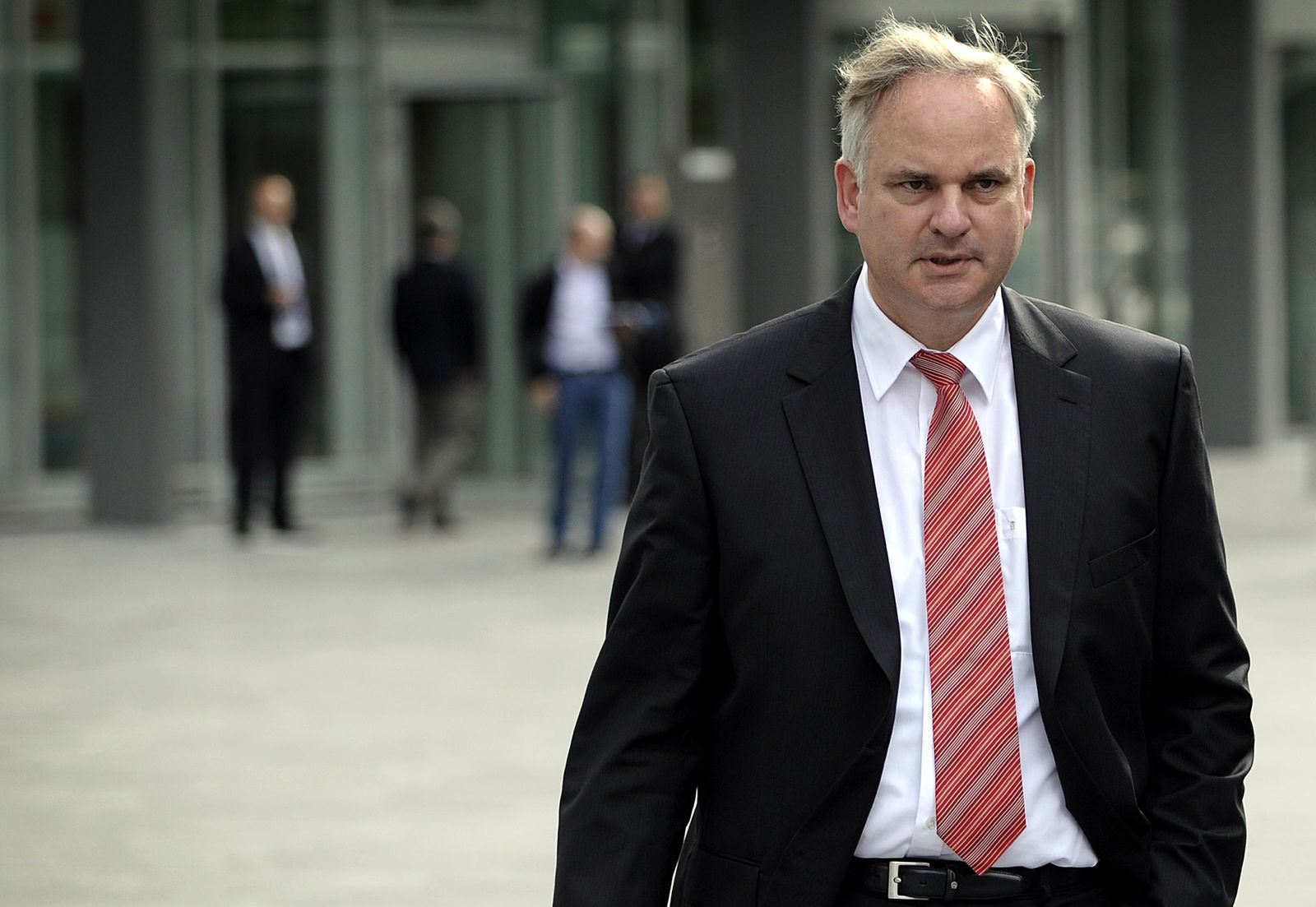