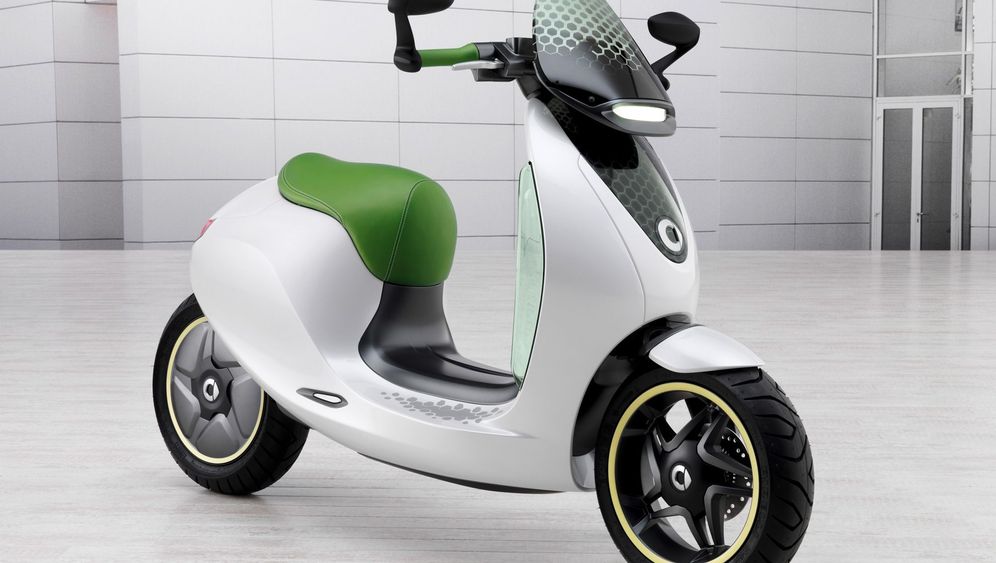 The bigger the city, the smaller a vehicle must be to get around. Whoever has been to Paris, Rome or Beijing knows this has been the case for a long time. This will become a universal principle in the future, as urbanization is on the rise along with people's need for mobility. Smaller ways to get around are in demand: bicycles, scooters and small cars. And the best option is with an electric motor because it is comfortable, cheap, well-engineered and, of course, eco-friendly.

At the car show in Paris two years ago, it appeared that the car industry understood this. There, brand names like Mini, Peugeot and Smart introduced their e-scooters. At the trade fair in Shanghai, VW followed with its version of an electric scooter. Indeed, a single row of wheels heading toward the electric future seemed to be the big trend.

But it turned out that this narrow-laned mobility revolution was really a PR gag.

At Mini, the E-Roller, which was once a project, is now described as having a "research character," according to a company spokesperson. And, at VW headquarters in Wolfsburg, a question about its e-scooter was greeted with mild annoyance and the response that the company is a carmaker and wants things to stay that way.

The only question is whether the ultra-orthodox position is smart.

Those in charge of Daimler's small car brand Smart think otherwise. At the international dealers' meeting on Thursday in Davos, Switzerland, Joachim Schmidt, the head of Mercedes' Sales and Marketing Department, said, "The decision for the e-scooter has been made." The spiffy scooter with an electric motor that was presented in Paris in 2010 should be developed for serial production and brought to market in 2014, he added.

This will fill the gap for Daimler between its E-Bike, which has been available since the end of April at a cost of just under €2,900 ($3,200), and the city car E-Smart, which will be made available beginning in June at a cost of €19,000. That price includes a 10-year guaranty for the lithium-ion battery, which Smart retains the ownership rights to but can be leased for €60 a month. Whoever really wants to own the battery can buy the two-seater E-Smart with the battery package for about €24,000.

The Right Size for the Place

Whatever model you choose, what is decisive is that Smart is placing electric mobility right where it is most sensible: in small, short-distance vehicles to be used in heavily populated areas. In doing so, Smart is following a principle laid down by Greenpeace transportation expert Wolfgang Lohbeck, who has argued for some time that "electric cars as an extension of conventional vehicles with other means don't solve a single problem. They are too expensive, don't do anything to relieve traffic and are only of marginal use to improve the CO2 situation."

The idea of plopping electric motors and batteries in classic luxury sedans, compact cars or SUVs appears to be headed toward a dead end. Big cars need big batteries in order to provide them with sufficient range. In a vicious circle, this makes the cars not only heavier, but also more expensive.

Customers have reacted accordingly. In China, which committed itself to e-mobility a few years ago through state regulations, there are now only a few thousand electric cars on the streets -- but more than 120 million e-scooters, according to some expert estimates.

The French automaker Renault has recognized how useful an electric motor can be for an urban mobility concept. The company builds electric cars in a classic style but also cars with names like Twizy. The 500-kilo car has four wheels, two seats -- one behind the other -- a simple body and an electric motor.

Whoever finds such a vehicle sufficient for everyday travel is unconcerned with the driving range. Nobody would come up with the idea of taking a 300 kilometer trip with such a car -- or even with an electric bicycle or scooter. Models like the E-Smart, Renault's Twizy and, of course, the various e-scooters reach a 150 kilometer radius with small, light and accordingly cheaper batteries.

Some of the current e-scooters even have batteries that are so handy that they can be taken into the house or office via a built-in handle and plugged into a power outlet.

This new form of electric mobility is not only practical; it's also hip. Schwalbe, the cult scooter from the former German Democratic Republic, is expected to make a comeback at the end of this year as an electric scooter.

If this continues, maybe some of the car manufacturers will dig their old e-scooter plans out from their desk drawers.