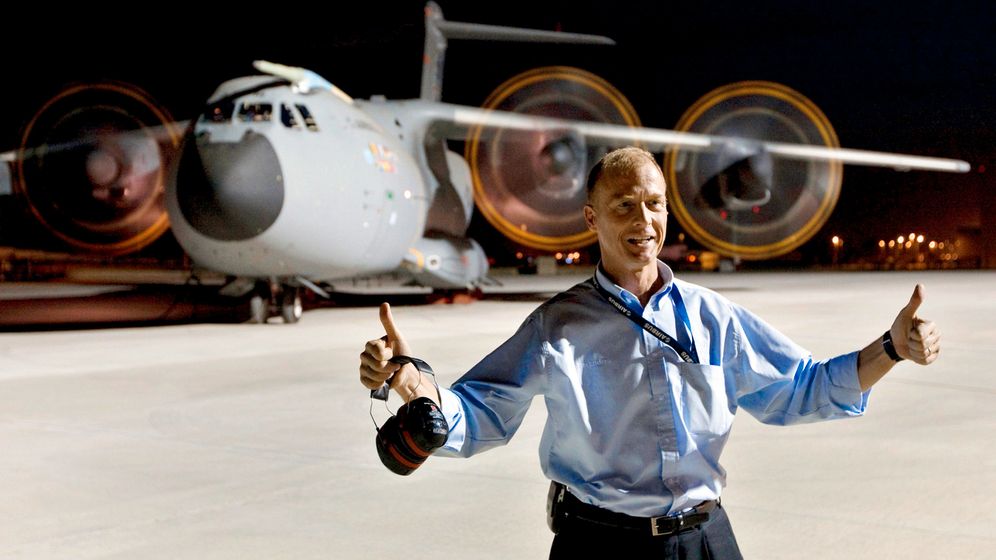 Photo Gallery: Ready for Take Off

It was a beautiful August day when Tom Enders, a former paratrooper and avid amateur pilot, decided to go for a spin with his hang-glider. But the short flight ended painfully for Enders when he crash-landed the glider, injuring tendons in both arms. With his arm in a sling and a plastic cast, the powerful CEO of the European Aeronautic Defence and Space Company (EADS), the parent company of aircraft maker Airbus, looked like he was wearing part of a suit of armor. It wasn't exactly an encouraging look for someone who is in the process of forging the world's largest defense group.

Because of the accident, Enders had to cancel two important events: a meeting with the French prime minister and a trip to China with German Chancellor Angela Merkel. The crash-landing was an unpleasant setback for Enders -- because he needs Merkel's support to put his ambitious plan into action.

Enders wants to merge EADS with British defense contractor BAE Systems, a move that would create the world's largest defense group, with annual sales of about $45 billion (€34 billion). The new giant would be capable of providing the entire arsenal of modern warfare, including aircraft carriers, fighter jets, nuclear submarines, satellites and drones.

But to move forward, Enders still needs approval from Paris and Berlin. Under a "shareholders' pact," the Germans and the French have the final say at EADS, a group employing 133,000 people. The two governments could thwart the planned merger at any time.

Since the previously secret plan became public last week, it has been clear that a bitter behind-the-scenes battle over the future of the European defense industry has been raging for weeks. There is much at stake: well-paying jobs, high-tech industry plants, future-oriented know-how, billions in revenues and, most of all, prestige.

The mega-deal affects the governments in Berlin, Paris, London and Washington. Although all four are close allies, national interests trump other loyalties in the conflict. Enders, for his part, is trying to reduce government influence so that he can run his company as efficiently as possible.

The situation is complicated by the fact that the sensitive information was leaked too early. Under British financial market rules, politicians and industry leaders will have to come up with a solution within 28 days of the plans becoming known to the markets -- in other words, by Oct. 10.

The Germans quickly assembled a task force consisting of personnel from the Chancellery, the German state-owned development bank KfW, the Finance Ministry and the Economics Ministry. The most important member of the group is Lars-Hendrik Röller, Merkel's economic adviser and head of the Economic and Fiscal Policy department at the Chancellery.

It is still unclear what the government will ultimately decide. Originally, the Chancellery planned to wait until November before wading into the takeover battle with a concrete negotiating strategy. What Merkel fears even more than losing power in relation to the company is the loss of valuable high-tech jobs, which could move to France or the United Kingdom as a result of the deal. That's the last thing she can use as campaigning begins for the German general election in 2013.

There is much at stake for Merkel in this poker game. As bait, Enders presented her with a "golden share," which would enable the German government to block a hostile takeover from strategically problematic countries.

The Chancellery currently plans to guarantee this form of influence in the long term by buying up EADS shares through the state-owned KfW Bank -- at a cost to German taxpayers of at least €2 billion. The "golden" share, on the other hand, is free, at least according to the EADS offer.

The group's lobbyists are currently on the move in a tireless campaign to point out the dangerous consequences of a failed deal. Other defense contractors have already been circling the British company like vultures, including Rolls-Royce and American competitor Northrop Grumman, which reportedly approached the British defense contractor a few months before the Europeans.

Merkel and Enders first discussed the deal in July, but insiders say that the chancellor was not particularly pleased about it. Some of her reserve can be attributed to Enders' personality. No one, not even Enders himself, would credit him with diplomatic skills. He polarizes people whenever he turns up in Berlin.

That's because Enders is engaged in a bitter struggle with the political elite, as he tries to reduce the government's influence on EADS. Politicians, for their part, haven't forgotten the fact that Enders demonstratively left his party, Bavaria's conservative Christian Social Union (CSU), which is part of Merkel's coalition government, last year. It is also an open secret that Enders and Merkel's aviation coordinator, Peter Hintze, are not exactly fond of each other.

The situation is everything but favorable as Merkel's advisers examine the pros and cons of the massive deal. There are a number of potential advantages to the proposed merger. Cassidian, EADS's defense subsidiary, is in poor shape. Its sales were artificially inflated in recent years through acquisitions of smaller companies. This is apparently one of the reasons why Enders fired Cassidian's CEO, Stefan Zoller, at the beginning of the month.

New blood would benefit EADS, and the British have various interesting products in their portfolio, including various state-of-the-art surveillance and security technologies for the cyber-wars of the future.

The British manufacture these highly sensitive products for the Americans, which makes BAE all the more valuable to EADS, which has yet to gain a real foothold with the world's largest military power.

As a so-called "prime contractor," BAE has access to top-secret American defense projects. In return, the company is only permitted to employ in these high-security areas US citizens who have undergone extensive security checks by intelligence agencies.

To allay the Pentagon's concerns about the merger, Enders and his top advisers have devised a complex dual structure with the British.

If the deal succeeds, it could do more than restructure the Western defense market. Critics fear a potential collateral effect, namely the unchecked exporting of arms to the world's hot spots.

Gernot Erler, the deputy parliamentary floor leader of the opposition center-left Social Democratic Party (SPD), warns that Germany's arms export guidelines could be circumvented as a result of the merger between EADS and BAE. "Two parties with guidelines not as strict as Germany's would then be involved in the company," he said.

Critics fear that controversial weapons could be sold through the new company headquarters in London to, for example, countries in the Arab world, bypassing the strict German guidelines. The British government's export rules are laxer than Berlin's. EADS already sells the Eurofighter Typhoon through Great Britain, because BAE is a partner in the fighter-jet consortium. An EADS spokesman vehemently disputes that the group is pursuing the same purpose with the merger.

EADS CEO Enders' goal is to overtake archrival Boeing, an objective he has already achieved in the civil aviation business with Airbus. Now he also hopes to secure global dominance in the defense market, which, in his eyes, is only feasible if he can reduce the power the political world wields at his company. "We don't need more government shareholders, and we don't need more government influence; in fact, we need less," he said, his comments aimed squarely at Berlin.

In May 2012, a few weeks before moving from Airbus to his current job at EADS, Enders held initial talks with BAE CEO Ian King, who is already wrestling with his own problems. In recent years, he has developed a relatively one-sided emphasis on BAE's defense business, as well as on a small number of markets, like the United States. But even Washington has recently seen sharp cuts in its defense budget. The British could certainly use a second mainstay, such as a share in booming Airbus.

Enders took the next step in early June, when he contacted selected politicians, first in Britain, then in France and, finally, in Germany. According to a participant in the negotiations, he told the chancellor about his plans in July. If it hadn't been for his hang-gliding accident, Enders would have launched a new round of talks in September.

Chancellery officials are aware of both the opportunities and risks associated with the merger. For instance, they say, the European Union permits golden shares for the defense sector when it comes to protecting national security interests. "For the civilian part of the company, this is in violation of EU law," says a source familiar with the negotiations.

The Chancellery is especially worried about its possible loss of power over the strategically important defense industry, especially in light of the billions in subsidies the government has spent on the sector. What happens if the new company's headquarters are permanently moved to Toulouse and London?

The task force is already mapping out scenarios that would involve the closing or merging of plants, which are likely to alarm the Bavarian state government, in particular. As Enders noted in the spring, Bavarian plants in Manching, Donauwörth and Schrobenhausen are already suffering from a lack of orders. The Bavarians fear that high-tech jobs could slowly migrate to France and Great Britain.

To prevent this from happening, the Chancellery is negotiating with the French especially, in the hope of achieving reliable guarantees that German plants will not be closed. Without these guarantees, say Chancellery officials, Berlin will not agree to the deal. Merkel has reportedly already discussed the issue with her French counterpart, President François Hollande. But the French have "practically disappeared" at the moment, says one insider.

EADS is almost desperate in its attempts to win the support of politicians. Company officials say that they would like to talk about the German plants, and that they are also open to discussing investment and development. They are still cautiously optimistic that the Germans will ultimately approve the deal, calling it "ambitious" but not impossible.

But Merkel knows that there is one thing she cannot expect from executives like Enders: patriotic sentiments. Enders thinks in global terms, not in terms of Bavarian jobs.

Defense Ministry officials also don't trust Enders. "The thought of being totally dependent on one vendor makes my hair stand on end," says a Defense Ministry weapons expert, who already sees military core capabilities disappearing across the English Channel. The fear is that Germany could be downgraded to nothing more than a supplier.

"We set conditions, but the details are what is important," say officials at the Defense Ministry. But EADS head Enders hasn't been forthcoming on those details yet. In a letter sent to the government last week, he apologized and explained that this is the kind of deal for which details cannot be stated in writing in advance.

Nothing But a Trap

The government views Enders' maneuvers with suspicion. His offer of a golden share, say officials, is nothing but a "glue trap," because the influence Enders is promising the government appears to be extremely limited.

But Enders doesn't have much leeway to offer further concessions to the government. He faces a dilemma. If he allows Paris and Berlin to retain too much influence over the mega-company, BAE's powerful shareholders won't agree to the merger.

If that happens, the chancellor will be relieved -- because then she will no longer have to make a decision.