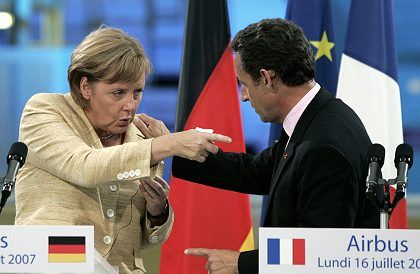 German Chancellor Angela Merkel may have won the top job at Airbus for German Thomas Enders, but with Frenchman Louis Gallois heading up EADS, the French seem to be in the driving seat.

Thomas Enders seemed remarkably composed last week for a manager who had just missed out on the chance to lead the world's second-biggest aerospace and defense company. At times he seemed genuinely exhilarated. French President Nicolas Sarkozy had not even landed in Toulouse yet when the designated head of Airbus, the most important subsidiary of the European Aeronautic Defense and Space Company (EADS), was already speaking frankly about his new job.

Yes, it was true that he would soon resign from his position as co-CEO at EADS to head up the airplane company instead, Enders divulged -- even though the news was supposed to be announced by Sarkozy and German Chancellor Angela Merkel. With the cat out of the bag, all that remained for the two politicians to do was what they do best when they have just argued and then made up again: exchange embraces, smile and praise each other's great deeds.

Many of the invited company members and outside guests only realized what a bizarre public event they had witnessed long after Merkel and her impetuous French colleague had soared off into the sky again. The two politicians had tried to manoeuvre their preferred top managers into key company positions and outflank their opponents until well into the previous night in what amounted to a bitter jockeying for position. And yet, unlike the French state, Germany is not even a direct shareholder in EADS: It only controls roughly 1 percent of the company via a consortium of banks, the German government and states.

As is so often the case, the final outcome was a compromise. But this one turned out to be somewhat surprising. Against the original wishes of the German government EADS will be directed, from the end of August onward, not by Enders but by the man who had been his fellow co-CEO, Louis Gallois, while Enders will take over as CEO of Airbus. And the board of directors will now have one chairman instead of two: another German, 55-year-old DaimlerChrysler manager Rüdiger Grube.

"This is a great day for the Franco-German axis," Sarkozy cheered in celebration of the clever move orchestrated by the two governments, while Merkel posed holding up a blue Airbus T-shirt. For his part, Enders, who had repeatedly provoked the French with cutting comments during the past few weeks, made a point of being diplomatic. "The winner is the company," the weekend parachutist said succinctly, in order to correct the impression that the Germans had pushed their way to come out on top.

So all's well that ends well at Europe's leading aerospace and defense company? Not exactly. Even as the alleged victory over the French was still being celebrated in Berlin and at EADS' Germany headquarters in Ottobrunn, near Munich, more details of the agreement were emerging in Paris and Toulouse. And these can only lead to one conclusion: While the Germans may have the outwardly more attractive positions, the true center of power at EADS and Airbus remains just where Sarkozy thinks it belongs: in France.

In an effort to thwart Enders even before he gets started as the CEO of Airbus, his new superior Gallois was equipped with a range of powers that even his ambitious predecessor Noel Forgeard could only dream of. "I will be setting his objectives," the the new EADS boss clarified last week -- thereby promptly cutting the much taller Enders down to size.

From now on Gallois and his fellow company directors will be able to spend up to €350 million ($483 million) without prior permission from the board of directors. Until now, the limit had been €200 million ($276 million).

The French still make up the strongest faction in the 12-man board of directors. Whenever the members of the board cannot agree, Gallois can decide by himself if and how much he and his subordinates -- including the Airbus CEO -- can invest.

In the future, Enders will also the need the approval of his former partner in the EADS leadership when it comes to personnel decisions. The new Airbus CEO does not have much leeway at all when it comes to implementing changes at the aviation company. Over the past nine months, when Gallois was both co-CEO of EADS and the CEO of Airbus, he not only thoroughly reorganized the EADS subsidiary but also installed men he trusts in almost all the important positions. It comes as no surprise that most of them are French and loyal to Gallois. 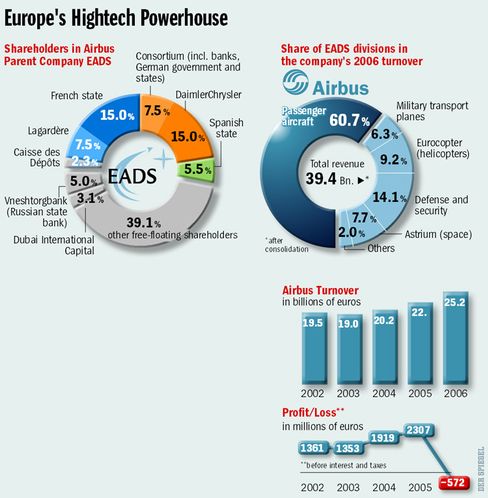 Enders' new deputy, Fabrice Brégier, could soon turn out to be his toughest opponent. The former CEO of EADS helicopter subsidiary Eurocopter had hopes of getting the top position at Airbus himself -- and he is considered as tough and impulsive as his new boss.

Things don't look much better for the German Airbus CEO further down the ranks. From now on positions are to be filled purely on the basis of qualifications, and not the applicant's passport. That's also to the advantage of the French, who unlike the Germans have done everything possible to promote their aviation industry and the up-and-coming generation of aviation professionals.

Most of Airbus' 12,000 engineers already report to French superiors -- and they are usually biased towards French business locations when it comes to introducing new technologies. In any dispute, Enders won't be able to expect anything more than limited support from the board of directors -- despite the fact that it will be headed by his former DaimlerChrysler colleague Grube.

It may be common practice in Germany, but at Airbus Grube does not have the right to a second vote to resolve any voting stalemates between directors. And when it comes to the question of who is admitted to this elevated circle, Gallois also has the right to propose candidates. Independent directors who belong to neither of the two camps play a particularly important role.

A Leader without Followers?

So will the ever active Enders end up as a leader without followers or allies? Things will probably not turn out all that bad. After all, Gallois and the French government also have an interest in quickly implementing the Power 8 savings program that was agreed upon in the spring in response to the Airbus A380 debacle. The program envisions slashing as many as 10,000 jobs, finding partners to help operate six out of the 16 Airbus plants or selling those plants altogether. The company also plans to cut annual costs by €2 billion ($2.8 billion) from 2010 onwards.

But Gallois plans to continue conducting the necessary talks with the French trade unions himself. Their representatives were not at all happy to learn that their national treasure is going to be directed by a German again, following the resignation of luckless engineer Gustav Humbert.

Enders partly has himself to blame for the fact that many Airbus managers act coolly towards him. Right until the last moment, he had not been shy about expressing his ambition to head EADS himself -- an immodesty the French considered to be in very poor taste. They prefer to pursue their career goals discreetly and with the help of influential friends. Many of them were also astounded that he has now agreed to content himself with the top position at Airbus, a job he had already set his sights on in the past.

And Enders did not miss a single opportunity during the past few months to denounce the French government's intervention in EADS. In an interview that was heavily criticized within the company, he accused the French government of being responsible for Forgeard having received an €8.5 million ($11.7 million) payoff when he left the company a good year ago. Former Airbus CEO Humbert profited from the same set of golden handshakes, receiving a good €4 million ($5.5 million) in addition to a generous pension, but the Germans seem to be less outraged by this.

Despite the resistance he is likely to face, Enders seems to be very much looking forward to the challenges ahead. "It's an exciting job, the kind the company does not normally have to offer," he said last week, as if to encourage himself.

But if the exchange rate of the euro exchange rate continues to rise against the dollar, the fun could turn out to be short-lived. Gallois already warned at the recent air show in Paris in June that Airbus should think about relocating parts of its production to the dollar area.

In that case, the employees of German plants would be particularly threatened -- the very ones who are pinning their hopes on Enders now. Unlike the plants in France or Spain, the German Airbus plants mainly provide technologically less sophisticated components -- and if push comes to shove, those could be purchased more cheaply from foreign suppliers.

In the end, Enders' alleged dream job could still turn out to be a nightmare after all.