There's a former nursery across from the royal family's private terminal at the Abu Dhabi airport. It doesn't look like much now -- 1,600 acres of sand dotted with small, forlorn trees. But one fenced-in spot on the property hints of a plan so ambitious that it stands out even in a land of seemingly limitless wealth. There, atop concrete slabs, engineers are preparing to test solar collectors. Those collectors are scheduled to power a futuristic 100,000-resident city that will rise from this sandy wasteland by the Persian Gulf. The goal: to create the world's first metropolis that emits not a single extra molecule of carbon dioxide, the cause of global warming. 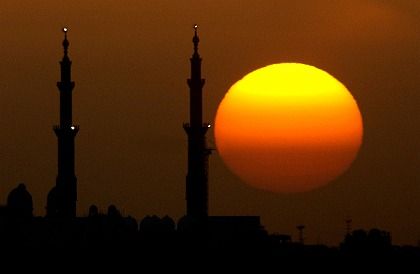 The sun sets behind the Shaikh Zayed Grand Mosque in Abu Dhabi.

It's a delicious irony that the Middle East, awash in oil and dollars -- Abu Dhabi alone has nearly 100 billion barrels in reserves -- may be the one region on earth most capable of building the first city for a post-oil world. Yet the project, planned by London architects Foster & Partners, is just one part of a startlingly contrarian gambit by Abu Dhabi. The emirate is pouring billions into renewable- and sustainable-energy technologies, stimulating precisely those industries that ultimately could challenge oil's dominance.

It's just smart planning, argues Sultan Al Jaber, CEO of the government-funded organization that is leading the initiative. After all, even Abu Dhabi's vast petroleum reserves will someday be used up. "What could be better for Abu Dhabi than investing our oil and gas revenues [in something] that will give us leadership in the future?" he asks.

The whole effort is being dubbed Masdar -- "the source" in Arabic -- a reference to the sun. The city is also called Masdar and will look like a cross between The Arabian Nights and The Jetsons. It will draw on traditional Arabic architecture, using wind towers to funnel air through the city as natural air conditioning and splashing fountains in courtyards to dampen the dry heat. Like an ancient casbah, the buildings will be huddled close together on narrow streets to reduce demand for cooling power during Abu Dhabi's 120-degree summer days. But Masdar will also incorporate the most advanced technology available for refrigeration and other systems. "We will need the most extreme energy-efficiency standards from the beginning," explains Al Jaber.

Power will come mainly from solar, not wind -- a logical choice given the region's blazing sun and fickle breezes. Visitors will have to park their Ferraris and Porsches outside the city walls. Once inside, they will walk, bicycle, or ride small, driverless vehicles running on paths underground.

Abu Dhabi's ambitions extend well beyond the construction of this green city. The country has invested most of a $250 million (€172 million) investment fund in clean-tech companies, including Segway, the Bedford, New Hampshire maker of personal transporters; solar manufacturers; and wastewater-treatment companies. A new $1 billion fund is in the works. Ex-BP CEO John Browne, now a partner at New York energy private equity specialist Riverstone Holdings, met with Masdar officials on Dec. 9 to discuss the possibility of working with the fund. Riverstone works closely with buyout giant Carlyle Group, which is 7.5 percent owned by Mubadala Development, the government investment arm and Masdar's parent.

Al Jaber wants Abu Dhabi's reach in renewables to extend all the way from research to large-scale manufacturing. That's certain to attract alternative-energy companies looking for deep-pocketed investors. Masdar officials say they are close to signing a $500 million deal to manufacture thin-film solar panels, which are cheaper than traditional models. Twin plants will be built in Germany, a center of the global solar-energy industry, and Abu Dhabi. These will be the first of about $2 billion in light manufacturing projects Masdar has in mind. Providing the 300 megawatts of solar power needed for the new city will cost more than $1 billion.

The green initiatives have the added advantage of creating badly needed high-quality jobs for the emirate's small but fast-growing population of 1.8 million. And the sheikhs and their associates think helping the world combat global warming is a vital and noble cause. Abu Dhabi will underscore its green credentials by staging a three-day World Future Energy Summit in late January, 2008.

There are huge challenges ahead. The big question is whether enough talented scientists, engineers, and entrepreneurs can be persuaded to come to Abu Dhabi. The emirate's tiny population cannot furnish the brains to develop an industry dependent on technological advances. Without a big infusion of human capital, the Masdar effort could wind up like so much else in the Arab world: fancy buildings with little of substance going on inside.

The Spur of Competition

If Abu Dhabi does manage to pull it off, though, the experiment could pay big global dividends, outside experts say. "A lot of lessons will be learned" from the effort to build a zero-carbon city, says Ron Pernick, co-founder of Clean Edge, a consulting firm with offices in San Francisco and Portland, Ore. Pernick suggests that the fruits of Abu Dhabi's labor could be applied to China, which is building the equivalent of two Manhattans each year.

The initiative started in 2004, when Crown Prince Mohammed bin Zayed Al Nahyan asked his aides to come up with ideas to energize once-sleepy Abu Dhabi and diversify its economy. The plan also offered a chance to steal some thunder from neighbor and rival Dubai, which unlike Abu Dhabi is investing heavily in financial services. The competition between the two emirates runs deep. In one recent victory, a senior Abu Dhabi official managed to persuade American pop star Justin Timberlake to shift from an expected Dubai engagement to Abu Dhabi for a Dec. 7 concert. The event was sponsored by Masdar's parent.

Abu Dhabi is keen to attract top minds as well as top acts. Masdar is already establishing a small research university called the Masdar Institute with assistance from Massachusetts Institute of Technology. Specializing in renewable technologies, it will be the first functioning unit in the new city, opening its doors to 100 students and 30 faculty in the fall of 2009.

MIT is developing the curriculums, and the faculty are headed in Abu Dhabi by Russel C. Jones, a former president of the University of Delaware. Jones says he decided to put on his university administrator's hat again at the age of 72 to work "on one of the hardest and most important problems of our time."

Your Carbon Footprint Tackling the problem of global warming requires drastic cuts in carbon-dioxide emissions. The Conservation Fund offers a carbon calculator (http://conservationfund.org/gozero) that allows individuals to see how much CO2 they emit.