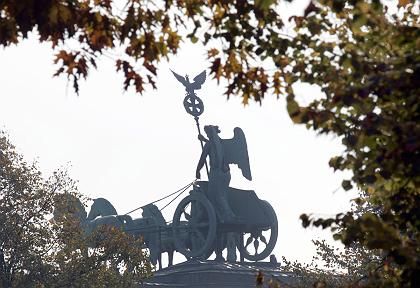 Creative Class report: "The only way is up" for Berlin.

Every city has its ups and downs, some more extreme than others. Berlin was divided by a war, with the West heavily subsidized for decades after industry fled to other parts of the country and the East artificially propped up by a Communist regime. After the fall of the Wall, the job market collapsed with soaring unemployment rates on both sides of the city. Attracted by dirt cheap prices, though, creative types in recent years have been flocking to the city. Klaus Wowereit, Berlin's mayor, recently made headlines by describing his city as "poor but sexy."

A new report, though, suggests Berlin may soon be able to shed the poverty label. It turns out that Germany's capital, home to a population of 3.4 million, has the greatest potential for growth amongst all of Germany's 16 states. The conclusions come from a nationwide study, "Talent, Technology, and Tolerance  Where Germany Has A Future" (also known as the TTT study), undertaken by the Berlin Institute for Population and Development and financed by the non-profit Robert Bosch Stiftung. "Berlin has the best starting conditions in Germany," said Reiner Klingholz, director of the institute. "The only way is up from here."

Berlin came out No. 1 in the study, which ranked German states based on talent, technology and tolerance -- the three criteria co-author Steffen Kröhnert said "generate the conditions necessary for economic growth and employment."

The Rise of the Creative Class

Kröhnert's team based its work on the theory of growth potential developed by American economist Richard Florida of the University of Toronto, author of the 2003 book "The Rise of the Creative Class." Florida observed that the values of the emerging creative class would determine where jobs would be created and where future investments would be directed. The "creative core of this new class," he writes, "includes scientists and engineers, university professors, poets and novelists, artists, entertainers, actors, designers and architects."

A gathering of such minds in one city, the theory goes, is a determining factor of its population's prosperity. "Education and creative talent are the most important capital in highly developed societies today," state the authors of the report. "In a globalized world, a modern society cannot get by without talent, technology and tolerance."

Berlin has a burgeoning scene of creative professions. "Germany is changing from an industrial society to a creative knowledge society," Klingholz told SPIEGEL ONLINE.

Additionally, the city invests more in research and development than any other state. Nevertheless, R&D money is invested more efficiently in states like Bavaria and Baden-Württemberg, which register far more patents and score a technology index rating nearly twice as high as that of Berlin. "Berlin achieves very little, despite considerable effort," Klingholz said. "There's a lot of room for development here."

Yet it's the total index -- all three Ts -- that counts. And as all three factors must be combined for the overall ranking, "Berlin possesses a lot of development potential."

One thing that sets Berlin apart from many of the other states is that it is a tremendously tolerant city -- far-right parties and sentiment get very little traction there. Meanwhile, a large immigrant community -- including hundreds of thousands of residents of Turkish origin -- also contributes to Berlin's high grade on the tolerance scale.

Germany's second largest city, the northern port city-state of Hamburg, came in second place, followed by Baden-Wurttemberg (home to Stuttgart, where Daimler and Porsche are based).

Finishing at the bottom of the study were the eastern German states of Saxony, Brandenburg, Thuringia and Saxony-Anhalt -- all states that are experiencing brain drains, with the best and brightest heading to places with high TTT marks.

Economically depressed Mecklenburg-West Pomerania, birthplace of German Chancellor Angela Merkel, came in at the tail end of the study.

Talent, Technology, Tolerance - All States at A Glance

* Category takes into account the highly qualified "creative class" and creative workers
** Measures research and development expenditures, as well as the per capita number of standard and high-technology patents
*** Incorporates the percentage of immigrants, the percentage of voters for extreme-right parties, the acceptance of xenophobic statements, as well as the "Bohemian Index"
Source: Berlin Institute for Population and Development