DER SPIEGEL: Professor Acemoglu, the U.S. and China are currently in a race for supremacy in the world, both political and economic. Will the U.S. win?

Acemoglu: I have my doubts. Not because I see the Chinese system as superior, but because of the crisis the United States is in. The U.S. first has to overcome its problems, otherwise it will get difficult.

DER SPIEGEL: But the American economy is doing well.

Acemoglu: The U.S. system is unable to find a way of sharing prosperity as it did in the early decades after World War II. Today, the son of a high school graduate earns 25 percent less than his father did. The 1980s, 1990s and the 2000s have been disastrous for those with low qualifications and for African Americans. On top off that is the financial crisis, which led to a collapse of trust in institutions and in economic experts. These are important factors for how we ended up with Donald Trump's presidency.

DER SPIEGEL: Many of those problems are applicable to Europe as well, and the EU has slower growth than the U.S. and doesn't have nearly as many tech companies.

Acemoglu: But some regions in the U.S. have social mobility rates as low as parts of Africa, and the poverty rate is much worse than in Portugal or Greece.

DER SPIEGEL: Wouldn't you say that the cultural tensions in U.S. society are more important than the economic divisions at the moment?

Acemoglu: I don't think so. The areas in which Trump's vote share really increased relative to previous Republican candidates were those places hit by huge imports from China and by the disappearance of manufacturing jobs. Four decades of growing economic inequality and four decades in which many people have felt their voices are not being heard have created room for demagogues. This is quite a common pattern in the history of political systems, as our studies show.

DER SPIEGEL: Do you have an example?

Acemoglu: Look at the medieval Italian city-states. They developed a rather successful republican system, which created economic growth and very sophisticated forms of democratic participation by the populace. But during the 13th century, people in towns like Ferrara and Siena felt that the elites of their societies were prospering at their expense. So they gave additional power to their leader, the so called podestà, to keep the elites in check. In many cases, unfortunately, the new rulers used their power to collude with the old elites and serve their own personal interests.

DER SPIEGEL: Is this the great weakness of democracy? That populism can take root even in advanced democratic systems and pave the way for a return to autocracy?

Acemoglu: In a healthy political system, interactions between elites and non-elites are a net positive and both groups win. When this equilibrium is lost, people lose faith in institutions and become susceptible to the promises of a strongman -- as has been the case with Trump or as it was with the Nazi regime in Germany.

DER SPIEGEL: Do you really see similarities between Trump and the fascists?

Acemoglu: Unfortunately, I do. Surely, Trump and the Republicans are no Nazis. But they are exploiting the same political sentiment. In the 1930s, the German people felt that their institutions were unable to deal with the economic crisis and the nearly complete standstill in parliament. In the U.S. today, there is also great discontent with Congressional gridlock, the bank bailouts after the financial crisis and the fact that 50 to 60 percent of the population hasn't benefitted from recent economic growth.

Daron Acemoglu, 52, is a Turkish-born economist and has taught at the Massachusetts Institute of Technology (MIT) since 1993. He has written hundreds of papers along with two books, developing a major focus on political economy. His 2012 book "Why Nations Fail" was shortlisted by the Financial Times for its "Business Book of the Year" award.

DER SPIEGEL: That still doesn't explain why the populist reflex in the U.S. is coming from the right and not from the left.

Acemoglu: I see three reasons. First, the government of President Bill Clinton, which was seen as too closely tied to Wall Street, was center left. Second, right-wing populism works if you can target your polarization at other groups, as Trump has done openly with immigrants and more veiled with blacks. And third, like Hitler or Mussolini, Trump has a kind of charisma that appeals to his voters: He speaks their language, he understands their feelings and he is ruthless. These are important qualities when it comes to maintaining sufficient support, which could be enough to win the election next year in the decisive swing states. Even the Nazis didn't have more than 37 percent when they came to power.

DER SPIEGEL: In your new book, you write that to create prosperity and freedom, a strong state is needed to ward off anarchy and a strong society -- with parliaments, unions and civil movements -- is needed to control the state. You argue that Western democracy is the best system for maintaining this equilibrium.

Acemoglu: Yes, but this equilibrium is very fragile. It was one of the biggest misconceptions of social science in the last 30 years to assume that there is an inevitable process whereby all societies will turn to the same type of Western institutions. Instead there is a lot of diversity when it comes to political systems, and it is by no means clear that Western-style democracy will be the ultimate winner.

Acemoglu: On the one hand, all the prognoses that China will inevitably become as modernized and liberal as the U.S. have proven wrong. On the other, we see that Trump poses a great risk to U.S. democracy. He really wants to change the political system. He is looking for a new order with elements of anti-liberalism, misinformation and a lax attitude to corruption. If he is re-elected next year, it will be the beginning of the end of American democracy.

DER SPIEGEL: You think it's possible that the U.S. could become an autocratic state like Turkey under the leadership of President Recep Tayyip Erdogan?

Acemoglu: Absolutely. Look at the vision that Trump has for how to rule the country. It is almost comically similar to what Erdogan does. They have the same family business attitude, maneuvering their unqualified sons-in-law into positions of power. For both of them, loyalty is more important than competence. And just like Erdogan, Trump also tries to destroy the norms of anti-corruption and to use politics to divide society and reward his supporters. There is only one difference: It took Erdogan 15 years, but it has only taken Trump 24 months.

DER SPIEGEL: China is a dictatorship, but will soon become the largest economy in the world anyway. Will China ultimately emerge victorious from the competition between the two systems?

Acemoglu: I don't think either of the systems is going to dominate or disappear. "Winning" means different things. When it comes to the field of technology, I am quite sure that if America overcomes its crisis, its dynamism and innovation cannot be rivaled by China.

DER SPIEGEL: That sounds a bit like forced optimism.

Acemoglu: As the history of technological progress shows, nothing is more beneficial for growth than societal freedom. Real innovation requires taking risks and challenging authority. This is difficult in systems where top-down control is as prevalent as it is in China. Furthermore, the state functions better when it is challenged by society. China has had difficulties just measuring and reporting the degree of its economic activity.

DER SPIEGEL: China, though, spent thousands of years as a technological leader. Some say it's only natural for the country to regain its position of superiority.

Acemoglu: There is no doubt that China was the most advanced part of the world during some parts of its history. The country achieved amazing technological breakthroughs. Interestingly, though, many of them were never translated into manufacturing technologies or didn't spread. This is a typical feature of despotic political orders.

DER SPIEGEL: And what if Chinese civil society becomes stronger and more democratic in the coming years?

Acemoglu: Of course, there is a chance. But it will be not an easy process. Chinese despotism has prevailed for 2000 years, even as dynasties have come and gone. And since the Tiananmen Square massacre, there has been a broad unwillingness in society to challenge the state or the authority of the party.

DER SPIEGEL: Will the Hong Kong protests do anything to change that?

Acemoglu: I don't think so. Look at the different perception of events. We in the West see people making legitimate demands for political participation. In China, by contrast, they see it as completely illegitimate that 20-year-old students are challenging the government. This is the consequence of a well-organized indoctrination by the Chinese government, which hinders the development of society and of the economy.

DER SPIEGEL: Do you not believe that increased prosperity will result in more demands for greater freedoms?

Acemoglu: Because Chinese judges are afraid of the Communist Party, there are huge delays and a huge number of flaws in judicial decisions. The school system is highly corrupt, with parents having to bribe teachers to give their children privileged treatment. The digital surveillance system, which the Chinese government is developing, has started to create a real straitjacket for national and foreign companies operating in the country. Such outcomes are to some degree inevitable if you have an all-powerful Communist Party.

DER SPIEGEL: Some in the U.S. are demanding a far-reaching decoupling of the two economies. Is such a thing even possible?

Acemoglu: I'm not sure. On the one hand, it sounds reasonable to restrict the use of Chinese equipment in critical parts of the infrastructure, given the close links between Chinese tech firms and Beijing. On the other hand, though, decoupling cannot be completed without drastic actions, and those drastic actions could prove very costly.

DER SPIEGEL: In Europe, there is a widespread fear of being squeezed between the two superpowers. Is that a concern you share?

Acemoglu: In many European nations, the balance between state and society today looks more stable than in the U.S. As such, Europe can play a constructive role, as it has done in the last several years in developing the social safety net or strengthening the regulation of huge companies with respect to data privacy or market dominance. Europe should continue on that path.

DER SPIEGEL: Does Europe have to choose between the U.S. and Chinese systems?

Acemoglu: No. Europeans have the opportunity to achieve something better. In the Cold War, surely, Europe had to decide. The confrontation between China and the U.S., though, will not reach the dimensions of an existential threat. This gives Europe more wiggle room.

DER SPIEGEL: Professor Acemoglu, thank you very much for this interview. 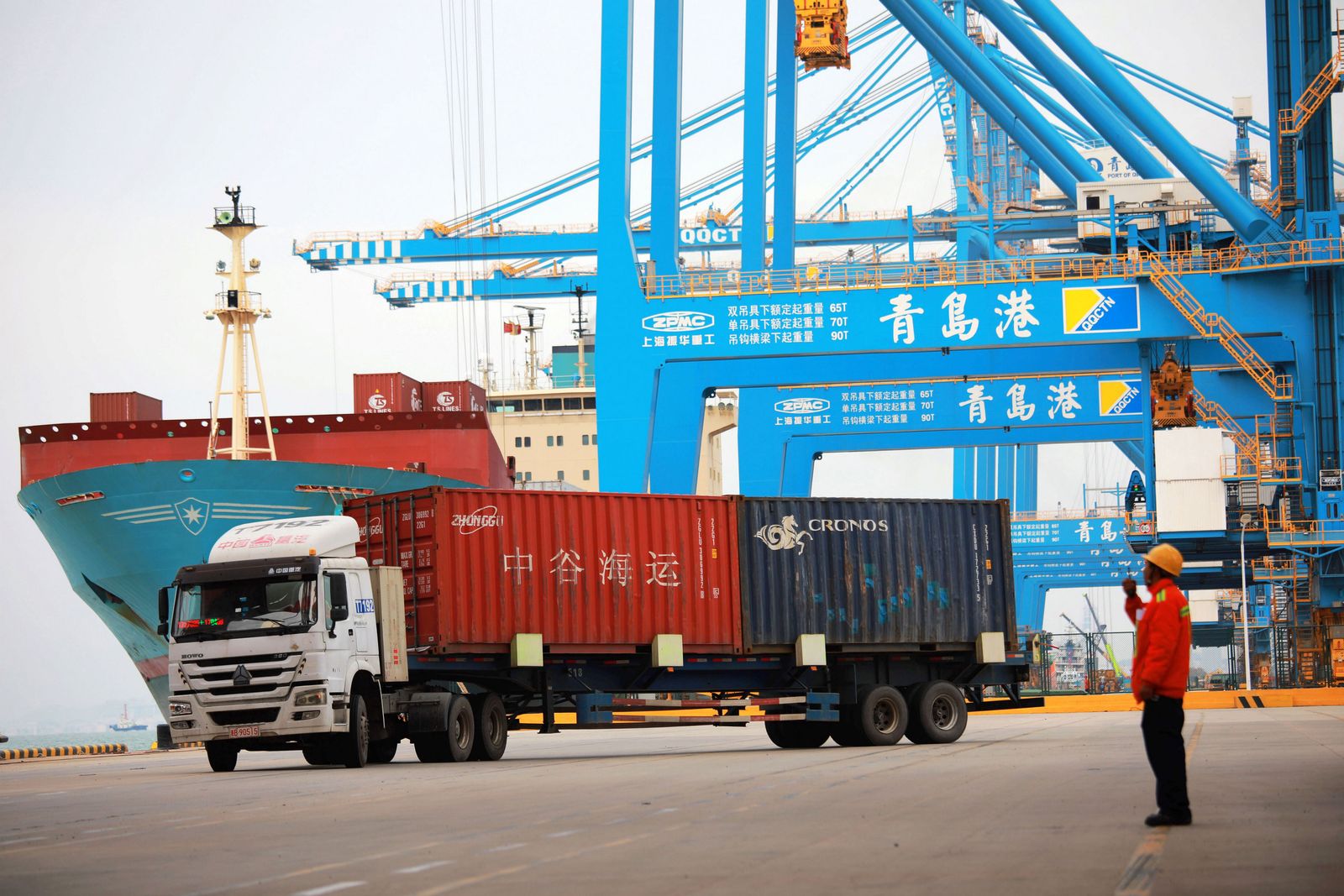 China and the U.S. are in a race for global economic supremacy. 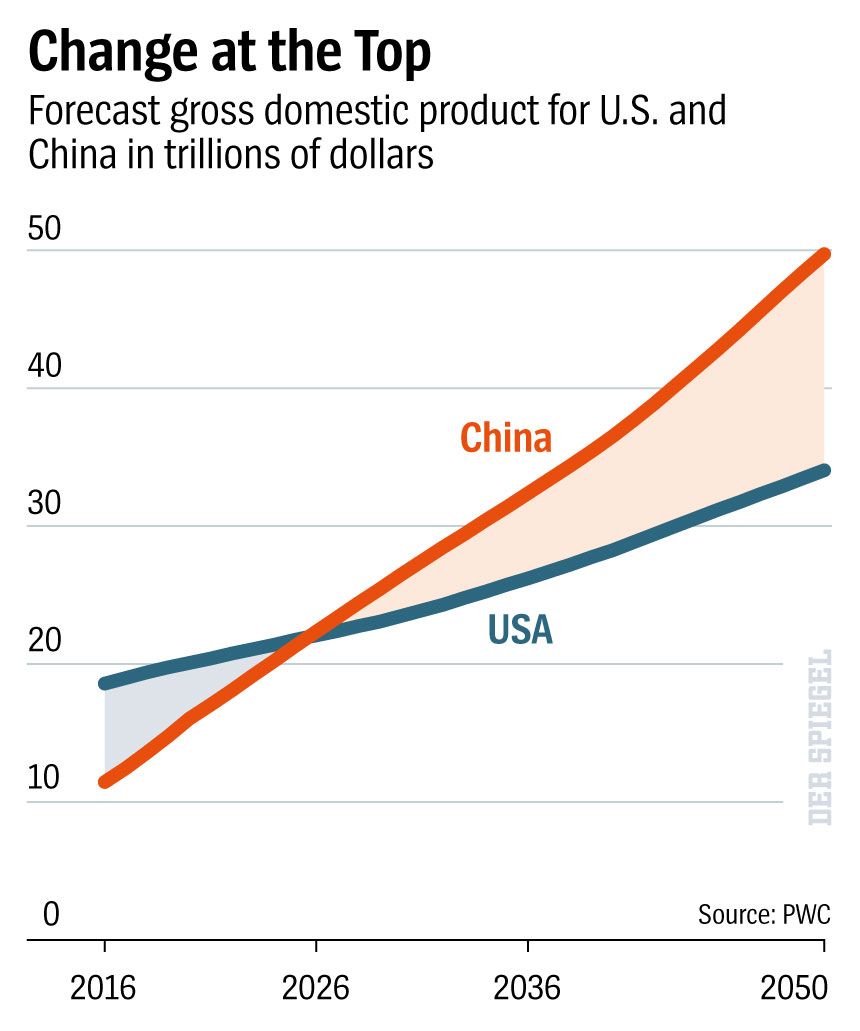