It sounds at first like a crazy thought experiment: One morning, every resident of the euro zone comes home to find a check in their mailbox worth over €500 euros ($597) and possibly as much as €3,000. A gift, just like that, sent by the European Central Bank (ECB) in Frankfurt.

The scenario is less absurd than it may sound. Indeed, many serious academics and financial experts are demanding exactly that. They want ECB chief Mario Draghi to fire up the printing presses and hand out money directly to the people.

The logic behind the idea is that recipients of the money will head to the shops, helping to turn around a paralyzed economy in the common currency area. In response, companies would have to increase production and hire more workers, leading to both economic growth and a needed increase in prices because of the surge in demand.

Currently, the inflation rate is barely above zero and fears of a horror deflation scenario of the kind seen during the Great Depression in the United States are haunting the euro zone. The ECB, whose main task is euro stability, has lost control.

In this desperate situation, an increasing number of economists and finance professionals are promoting the concept of "helicopter money," tantamount to dispersing cash across the country by way of helicopter. The idea, which even Nobel Prize-winning economist Milton Friedman once found attractive, has triggered ferocious debates between central bank officials in Europe and academics. For backers, there's more to this than just a new instrument. They are questioning cast-iron doctrines of monetary policy.

One thing, after all, is becoming increasingly clear: Draghi and his fellow central bank leaders have exhausted all traditional means for combatting deflation.

The failure of these efforts can be easily explained. Thus far, central banks have primarily provided funding to financial institutions. The ECB provided banks with loans at low interest rates or purchased risky securities from them in the hope that they would in turn issue more loans to companies and consumers. The problem is that many households and firms are so far in debt already that they are eschewing any new credit, meaning the money isn't ultimately making its way to the real economy as hoped.

In response to this development, Sylvain Broyer, the chief European economist for French investment bank Natixis, says, "It would make much more sense to take the money the ECB wants to deploy in the fight against deflation and distribute it directly to the people." Draghi has calculated expenditures of a trillion euros for his emergency program, funds that would be sufficient to provide each euro zone citizen with a gift of around €3,000.

'It Has To Be Massive'

Daniel Stelter, founder of the Berlin-based think tank Beyond the Obvious and a former corporate consultant at Boston Consulting, has even called for giving €5,000 to €10,000 to each citizen. "It has to be massive if it is going to have any effect," he says. Stelter freely admits that such figures are estimates. After all, not a single central bank has ever tried such a daring experiment.

Many academics have based their calculations on experiences in the United States, where the government has in the past provided cash gifts to taxpayers in the form of rebates in order to shore up the economy.

Oxford economist John Muellbauer, for one, looks back to 2001. After the Dot.com crash, the US gave all taxpayers a $300 rebate. On the basis of the experience at the time, Muellbauer calculates that €500 per capita would be sufficient to spur the euro zone. "It (the helicopter money) would even be much cheaper for the ECB than the current programs," the academic says.

And yet European central bankers and conservative economists still shudder when asked about the concept. "It would be the ultimate sin," warns Jörg Krämer, the chief economist at Commerzbank, Germany's second largest private bank. "If the central bank gives away money one time, there's no way it will remain an isolated case. Politicians will demand even more the next time around."

Muellbauer counters such fears by noting that central banks have a clear target: inflation of close to 2 percent. Once that target is achieved, the money handouts would cease. But the problem is that monetary policy often cannot be adjusted to that degree of precision. Many experts say that inflation is like a bottle of ketchup: when you whack on the bottom, nothing happens at first -- but then it all comes out in a gush.

The fundamental factor which determines the value of money is the trust of those who spend it -- the belief that a €10 or €20 bill will be enough to buy lunch for the foreseeable future and that a medium-sized car won't cost €100,000 five years from now. Should this trust evaporate, the entire monetary system begins to crumble.

It is an experience Germany became familiar with in the 1920s. The trigger for hyperinflation at the time was, of course, the fact that the German Reich paid for its wartime expenses by printing money. But the situation got out of control when the state's creditors along with its citizens lost faith in the mark. Investors refused to make more money available to the state and doctors began demanding barter in exchange for services rendered. Prices exploded, to the point that a loaf of bread ultimately cost 140 billion marks.

"Once people have experienced money raining down from the heavens, it will create vast uncertainties about future inflation," warns Commerzbank economist Krämer. "How often might it happen and how quickly will prices climb? What kind of shape must the euro be in if the ECB has resorted to giving out money?"

And even if people head to the shops with the money they have been given, it is still far from certain that companies would ramp up production. "It is possible that people would merely be competing for the same supply of goods. Prices would climb, but there would be no lasting stimulus for the economy," warns economist Thomas Mayer, formerly the chief economist for Deutsche Bank. The phenomenon is known among economists as stagflation.

Willem Buiter, the well-respected chief economist of the US financial giant Citigroup, has thus modified the idea of helicopter money. His version calls for policymakers and central bankers to act in concert. The state would improve economic competitiveness by way of reforms in addition to investing money in infrastructure projects or handing it out to taxpayers in order to trigger consumption. The central bank would finance the move via the purchase of sovereign bonds.

Buiter is unconcerned about EU regulations preventing the ECB from the kind of direct state financing such a plan would entail. He considers Article 123 of the Lisbon Treaty, which addresses the issue, to be a "disaster" anyway. He also doesn't believe the plan would endanger the ECB's independence. "Independence does not mean that you don't answer the phone when the minister of finance is calling," he says. "Independence means the right to say no." Cooperation and coordination of monetary and fiscal policy is thus "perfectly consistent."

Japanese Prime Minister Shinzo Abe apparently saw things similarly when he entered office at the end of 2012. His country had been suffering under deflation and economic stagnation for decades. In response, Abe announced structural reforms along with a gigantic investment program -- and pushed the central bank to finance it. Since then, the Bank of Japan has spent trillions, but the country nonetheless finds itself stuck in recession once again today.

The odd thing is that the Japanese example provides evidence to both supporters and detractors of the helicopter money plan. Does it reveal the absurdity of central bankers seeking to combat structural problems with money? Or is it merely proof that mass liquidity only works if politicians lay the necessary groundwork?

Nobody knows for sure because the Abe administration failed to pass a majority of the promised reforms. Monetary policy alone, however, "is not getting you out of the secular stagnation," as even helicopter fan Buiter admits. It is a sentence that could have come from his most adamant detractors. 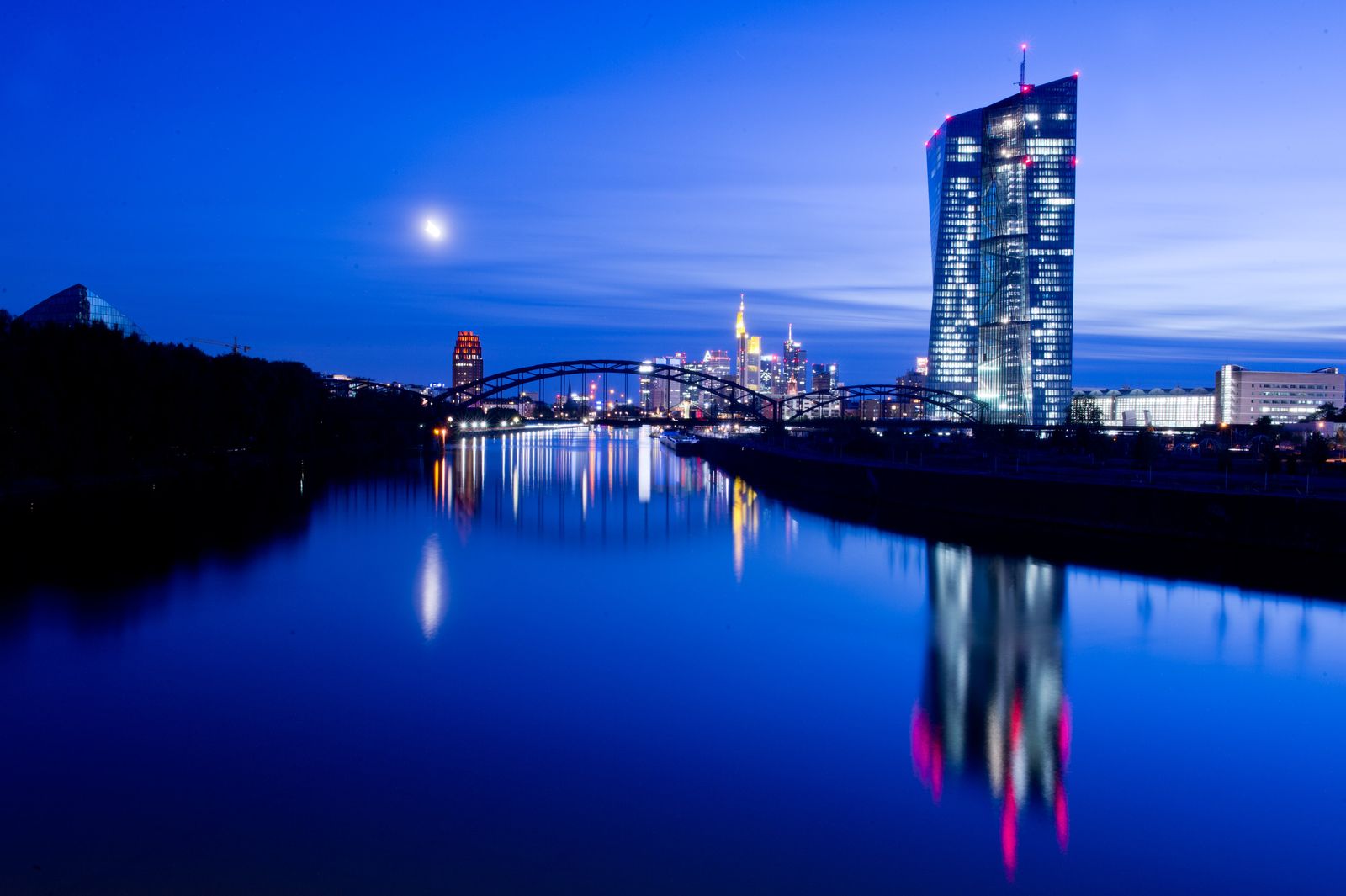 The European Central Bank has run out of ammunition to defend itself from deflation.