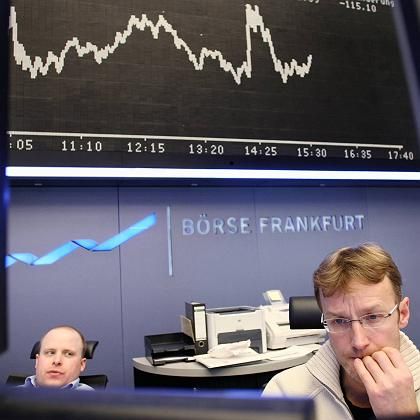 Anxious traders watching the market at the Frankfurt Stock Exchange on Tuesday.

Lemmings are cute and not especially intelligent. They hurl themselves off cliffs without thinking. One of them jumps, the rest of them follow, all die. So far no one has died in the world's stock markets over the past few days. But investors have been acting like lemmings. One sells, the others follow suit. On Monday alone, that wiped €63 billion ($91 billion) off the value of Germany's top 30 companies. On one single day. Since then everyone has been calling this a crisis.

But many economists are saying the crisis is virtual and has no bearing on the real German economy, at least not yet.

So far, all that has happened is that shareholders' wealth has been destroyed, says Michael Bräuninger at the Hamburg World Economic Institute (HWWI), one of Germany's six leading economic research institutes. The share price losses themselves won't have a far-reaching impact on the German economy, he said.

Joachim Scheide at the Kiel Institute for the World Economy doesn't yet see any impact on the economy either. "It's much too soon for that," he said. Stocks would have to decline over a longer period for alarm bells to start ringing, he insists.

Many economists said the investor panic led to unwarranted declines in many stocks. "Several stocks were hit even though they're in robust condition," said Udo Ludwig, economist at the Halle Institute for the World Economy. He blamed market psychology for the across-the-board declines in all of Germany's DAX index of top 30 stocks. When one dealer sells, the others follow suit. "It's highly contagious," said Ludwig. Those lemmings again.

Everything Depends on US Economy

Economists are more concerned about the actual cause of the crash -- the US real estate crisis. "This crisis is far from over," said Norbert Walter, chief economist of Deutsche Bank. The risk of a recession in the US has grown, he said.

That's because the banking crisis is also a crisis of US consumer confidence. Access to credit has become more difficult, resulting in a decline in Americans' purchasing power which has hit consumer spending and the overall economy. That in turn could affect Germany's export-oriented economy, says Ludwig.

HWWI economist Bräuninger appealed for calm. "We should wait and see what happens in America." European Central Bank Executive Board member Jürgen Stark also warned against exaggerating the significance of the fall in German stocks: "The markets are very nervous. We're seeing exaggerations here at the moment," he told weekly newspaper Die Zeit.

He said Germany's economic fundamentals were good. While the risks had increased and the current volatility wasn't helpful, "we shouldn't overestimate such exaggerations," said Stark. He said he was more worried about the rate of euro zone inflation at 3.1 percent. The European Central Bank was "very worried and alarmed" about inflation and consumer price gains are the central bank's main concern, he told Die Zeit.

But what happens if the stock market and the US economy keep on generating bad news and that starts to depress German consumer sentiment? Will it stop Germans spending money and thereby lead to an economic slowdown? The GfK market research group, which measures consumer sentiment, doesn't believe in this scenario.

GfK retail expert Wolfgang Twardana told Nürnberger Nachrichten newspaper that 85 percent of German citizens weren't affected by the stock market crash because they had no direct or indirect (via funds) stock investments. "The dairy price increases a few weeks ago had a bigger impact on consumer behavior than the declines in the stock market," he said.

But he added that the situation will change if the financial market turbulence continues or the real economy starts to suffer. "That would very quickly lead to a downturn in consumer sentiment," he said.