A relatively agreeable meeting is awaiting German Finance Minister Wolfgang Schäuble at the end of this week. The journey itself, to be sure, will be a taxing one; the flight from Berlin to Sydney will take almost 24 hours. But once he arrives, the greatest difficulty will already be behind him.

Under the summer Australian sun, Schäuble will meet with his counterparts from industrialized and emerging economies as part of the G-20 meeting there. As always, the state of the global economy will be the main topic of conversation.

Schäuble and his colleagues from the euro zone, in contrast to previous years, can sit back and relax this time around. Nobody will be trying to force Germany, France or Italy to take immediate action to protect the world economy from turbulence in Europe. "The euro as such is no longer the focus of financial market attention as a source of concern," Schäuble recently said with satisfaction. The euro crisis, much to the pleasure of European leaders, has gone dormant. This year, others will be in the spotlight, such as the Americans.

Representatives from India, Brazil and Turkey in particular accuse the US Federal Reserve, under the leadership of new head Janet Yellen, of having severely handicapped their economies by backing away from the crisis driven policies it has pursued in recent years. By reducing the number of US sovereign bonds it purchases, the Fed has triggered a rise in US interest rates, with the consequence that a flood of investors are now returning to the dollar from emerging economies.

To halt the decline of their currencies, India and Turkey were recently forced to raise their own interest rates, a move which, while propping up the exchange rate, also puts the brakes on economic growth. As such, they and similar countries want to use the meeting in Sydney to establish a common approach with the industrialized economies, particularly with the US. They want the developed world to pay closer attention to economies in Asia and Latin America.

The battle lines are familiar: emerging economies versus Europe and the US, just like at the beginning of the economic crisis. Back then, though, China, India and Co. were negotiating from a position of strength. Pointing to their own strong growth rates, they demanded that the Americans and Europeans -- who they not illogically saw as having caused the crisis -- do more to prevent a collapse of the global economy. Now, though, with growth in emerging economies having slowed, roles have been reversed.

Many of the contours of the Sydney showdown are already clear. Even if the Americans and Europeans were often at odds during the euro crisis, Europe firmly backs the US position now. Schäuble, in particular, can be relied on; he considers the complaints coming from Asia and South America to be unjustified and believes that the dangers to the global economy are no longer to be found in the euro zone or in the US.

He has some pretty powerful supporters too. The International Monetary Fund (IMF) now sees the US as an engine of growth and has stated that the collective euro-zone economy has emerged from recession. It is time, Berlin feels, to move away from crisis policies and return to normality -- just as the US has been doing in recent months.

The Finance Ministry in Berlin believes that the shift shouldn't come as a surprise to the emerging economies. After all, they were forewarned at the G-20 meeting in Cannes back in November of 2011 that industrialized countries would abandon crisis policies as soon as the situation allowed. That time, Berlin says, has now come.

In any case, Schäuble argues, complaints shouldn't be directed at himself and his Western counterparts. He points out that central banks make their decisions independently, free of political meddling. And that, too, is an argument he plans to pull out in Sydney if necessary.

Schäuble and his Western counterparts also have the impression that they are being abused as scapegoats. Many of the problems currently being faced by emerging countries, they say, are homemade. Turkey's economy, for example, is not the victim of global problems. Rather, many of the difficulties it is facing stem from the domestic policies of Prime Minister Recep Tayyip Erdogan. Argentina, which has also distinguished itself in America bashing of late, is suffering from the consequences of decades of misguided economic policy. In Thailand, the government and opposition have been locked in a stalemate for months, which has left its mark on the economy. And Indian Prime Minister Manmohan Singh has proven unable to get corruption and excessive regulation under control.

Thus, Europe and the US are expected to call on their critics to pursue the OHIO principle, as experts call it. The abbreviation stands for "Own House in Order," meaning roughly that each country should do its own homework. And that's a major reason why Western representatives don't see a need for orchestrated action against the turbulences within the context of the G-20. "We aren't expecting an Asia crisis 2.0," a Schäuble staffer said.

But there is no way of ruling that out entirely. There are plenty of reasons that the economic miracles in the emerging economies have recently lost some of their sparkle. For the past two years, growth in China has fallen below the double-digits, increasing instead at an average of 7.7 percent, notes Min Zhu, deputy chief of the International Monetary Fund. That's still dizzyingly fast compared to mature economies like Germany or Japan, but nevertheless a little slower than important trading partners and raw materials suppliers to China, like Brazil, India and South Africa, have been used to for years now.

China recently tamed its furious pace of investment, putting an end to the price bonanza surrounding many raw materials that had ensured high growth and ample foreign exchange revenues. Of course, there's also the issue of interest doping. As long as interest rates in the United States, Europe and Japan remained microscopically small, emerging countries were also able to borrow money under fantastic conditions.

Since 2010, more than $1 trillion net flowed each year into the emerging markets of Asia, Latin America, Eastern Europe and Africa. But the influx receded in 2013 to levels not seen since 2008.

"For a long time, it appeared that there were few differences remaining between emerging economies and fully developed industrialized nations," says David Solomon, the co-head of investment banking at Goldman Sachs. "The risk premiums were almost at zero. Now people are registering that they overestimated the emerging economies and that these premiums should have been higher."

So far the outflow of capital from once hot markets of the past few years hasn't been that dramatic. Since the currencies of South Africa, India and Turkey plunged at the end of January, the situation has quieted a little. The central banks in those countries raised interest rates and, by doing so, were able to stop the flight of money -- at least for now.

'There Will Be Further Turbulence'

Has the crisis really been resolved though? Can the countries that have been experiencing an economic miracle suddenly get back to business as usual? It is unlikely. "There will be further turbulence; the problems aren't over yet for the emerging economies," says Scott Mather, deputy chief investment officer at Pimco, the world's largest bond fund. He does believe, however, that investors will differentiate more between the individual countries. "The problems will last longer in those places where economic vulnerability is mixed with political instability -- for example, in Ukraine, Turkey or Thailand."

The most economically vulnerable countries are those that import much more than they sell abroad and are thus accustomed to high capital influxes. When high deficits and debts are added to the equation, the investor money can evaporate just as quickly as it flowed in during recent years.

Still, numerous economists -- be they from the IMF, the banks or the large funds -- are still optimistic. The dangerous mix that triggered the financial crises of the late 1990s occurs less frequently today. "Many emerging economies are in a better starting position than they were in the earlier crises," says Scott Mather. "They possess greater currency reserves, less rigid exchange rates and in many cases a balanced or even positive current account balance."

That's only true to a certain extent. Brazil may have sextupled its currency reserves within eight years to around $350 billion, an increase that fosters trust and the impression that the country has become far more robust. But the government still hasn't found a solution for its massive negative account balance, inflation is at around 6 percent and growth is leveling off at a level similar to that of Germany.

Countries like India or Indonesia have similar structural problems. In addition, problems like corruption and political uncertainty are common. In recent days, the exchange rates of oil countries like Russia and Kazakhstan went into decline.

US Will Play Decisive Role

This rightfully makes managers of American pension funds or German insurance outlays nervous. When investors' risk aversion grows and the herd starts running in another direction, investors tend to just start pulling their money out all over the place. They don't spend much time analyzing the specifics of each individual country. If growth doesn't recover in the emerging economies, the situation could yet worsen.

The US will play a decisive role in whether that happens or not. "At the moment, the global economy is very dependent on the recovery of the American economy and continued low interest rates," says Dennis Snower, president of the Kiel Institute for the World Economy.

Many other economists share Snower's view that a normalization of America's monetary policy is not only essential, but is also in the interest of the emerging nations. "In the short term, the change of course in American monetary policy may cause pain for developing nations, but they will profit from it in the end if the Fed is able to ensure sustainable growth," Pimco executive Mather says.

But if the situation in the emerging economies continues to worsen and the turbulence endures, the reverse could be true -- because it could jeopardize the upswing in the United States as well as Europe's recovery.

"The potential for a negative feedback loop from the emerging markets to the developed markets is huge," Gautram Batra, managing director and investment strategist at London-based Signia Wealth, told Bloomberg earlier this month. Global companies are increasingly dependent on developing nations. Corporations like Apple, General Motors, Coca-Cola or multinational oil companies already generate a high share of their profits there. Multinational food giant Nestlé recently admitted it had missed profit expectations because of turbulence in these markets.

But economists like Snower consider the danger that Europe's recovery will be halted by crisis in the emerging economies to be limited. "Emerging economies still play a minor role for German exports, with most going to Europe," he says. Italy alone imports as much from Germany as Argentina, Brazil, India and Turkey do combined. So it's likely that political and economic problems in Italy would be the source of greater concern for German Finance Minister Schäuble than turbulence in Istanbul or Buenos Aires.

Still, if a conciliatory gesture toward the emerging economies does come in Sydney, it will likely come from the Europeans. For now, it is virtually assured they will maintain their loose monetary policy. 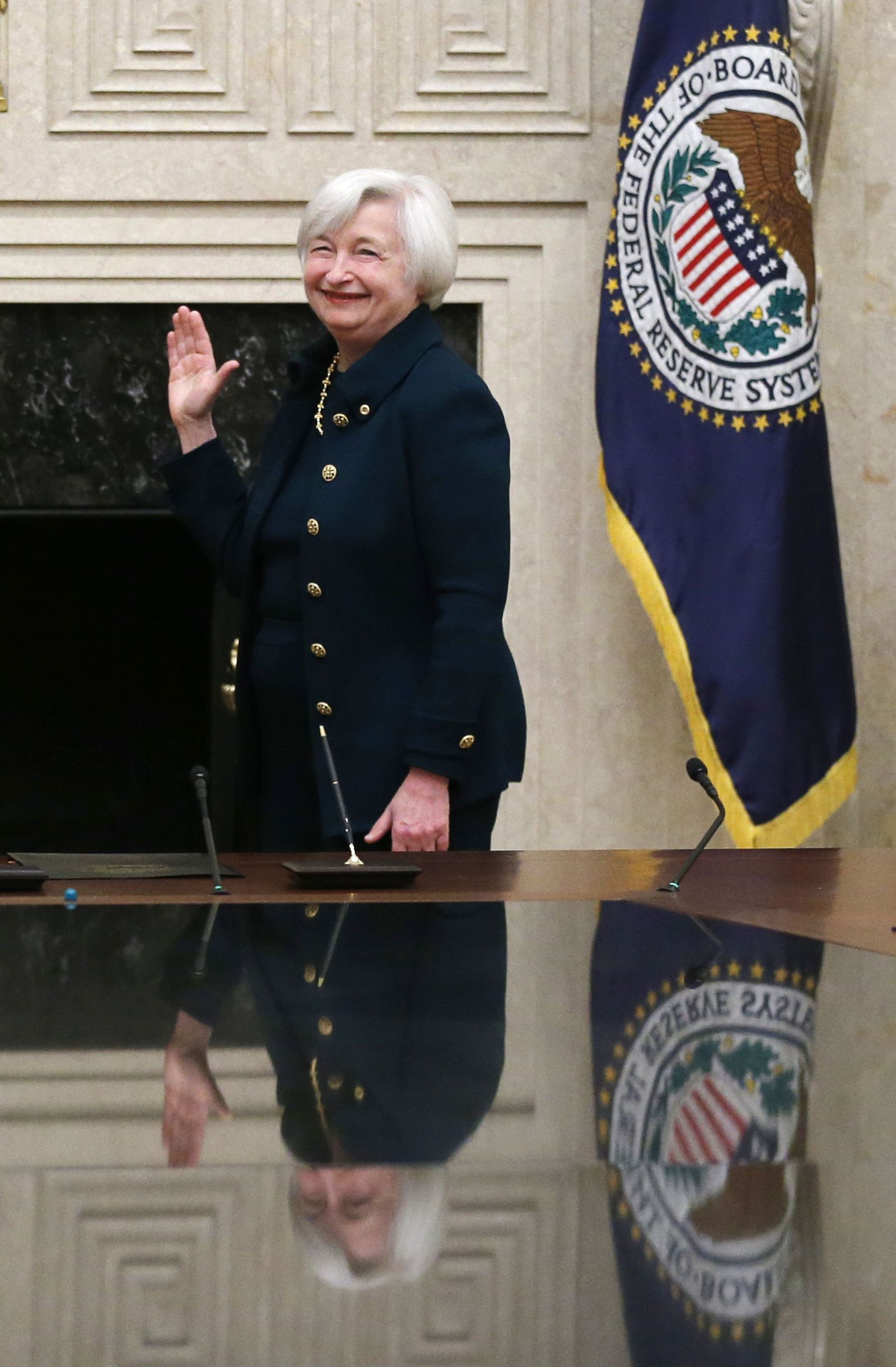 Federal Reserve Board Chairwoman Janet Yellen: Has the US badly handicapped emerging economies with its stricter monetary policies?