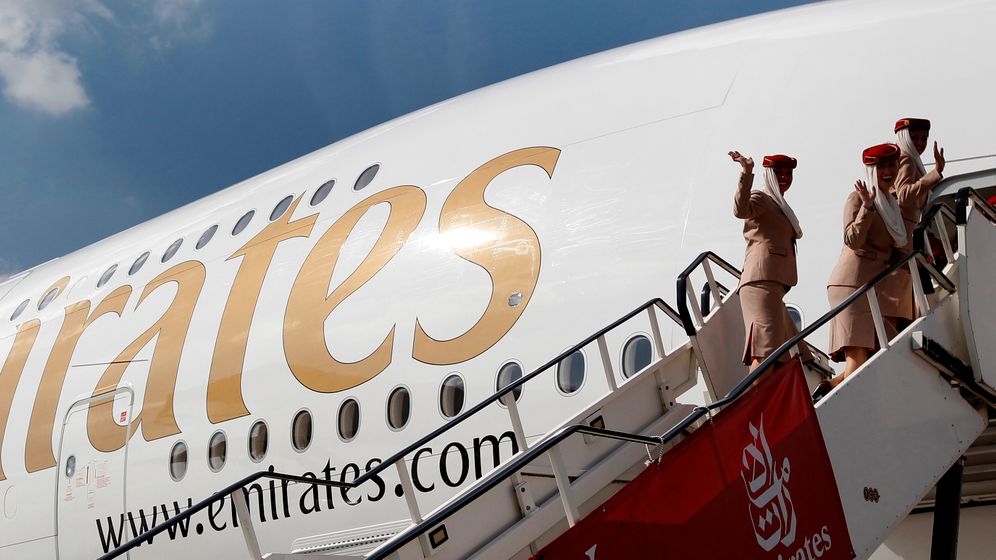 The doorway to a sober-looking hotel conference room at Stuttgart's central railway station serves as a gateway to the world on this Saturday morning. Seventeen young women and two men wait to be admitted. The women are wearing red lipstick and black pumps. These people aren't here to have fun. They're hoping to fulfill a dream -- the dream of flying.

The Dubai-based airline Emirates wants to help make this dream a reality. In contrast to German rival Lufthansa, which is recruiting 500 flight attendants on a temporary basis, Emirates currently has vacancies for 3,800 full-time flight attendants.

There's no better proof of the galloping expansion of the airline -- nor a better opportunity to annoy Lufthansa, Germany's biggest airline, which finds itself stumbling from one cost-cutting scheme to another. The Germans are only recruiting new flight attendants seasonally, if at all, to meet peak demand.

By contrast, Emirates is pulling out all the stops, organizing recruiting events around the globe, including several in German cities. All of these are likely to be similar to the selection that recently took place in Stuttgart.

One person is often seen standing right at the front: Helena el-Haber, a 30-year-old Lebanese woman with dark, curly hair wearing five-inch heels. She is one of Emirates' 30 talent scouts, which makes her a bit like the Heidi Klum of the airline industry. Candidates are shown a PR film about Dubai and given information about life in the United Arab Emirates. Then they undergo a series of tests. After each stage of the assessment procedure, the pool of applicants is reduced. Eventually, six hours later, five remain: one man and four women.

The time-consuming process shows that people are still willing to go to great lengths to work on a plane. It also highlights a shift in the pecking order in international civil aviation -- and thus the image of the flight attendant.

Up until the 1990s, being hired by Lufthansa to work as a flight attendant was seen as glamorous. Its crisp blue uniforms were almost put on a par with a doctor's white coat. And nobody would ever dream of referring to flight attendants as "trolley dollies."

The loss of image by the long-established airlines in particular is largely due to recent gains by the likes of Emirates and low-cost airlines such as EasyJet and Ryanair.

Flying has become nearly as commonplace as going shopping. Competition has driven prices down, while employee privileges have gradually eroded. Cabin crews especially are feeling the pinch, particularly at Lufthansa.

In the past, Lufthansa cabin crews could be sure that their pay would increase every year -- to as much as €7,000 ($9,350) per month including bonuses for long-serving cabin managers.

Now management wants to stop this automatic rise. The airline's board even wants to slash pension benefits. And because Lufthansa is hardly growing anymore, it takes significantly longer for new staff to get promoted to serving business or first-class cabins, or become cabin managers.

Emirates profits from the trivialization of employment at Lufthansa. More and more people seeking a long-term career as flight attendants are turning to Arab airlines, which are seen as strict, exhausting and successful in equal measure.

Emirates alone already operates more than 30 wide-bodied aircraft like the new Airbus A380. In the coming years it expects to add about another 200 to its fleet. To do so it must almost double its current workforce of 17,000 flight attendants. That's good news for its employees because the faster an airline grows, the faster they can advance in the hierarchy.

Given the prospects, would-be flight attendants are willing to put up with sometimes bizarre-sounding questions from el-Haber and her colleagues. "What can you do with a cup apart from drinking coffee out of it?" she asked in Stuttgart. Or, "You're manning the reception of a hotel which has only two free rooms. Eight guests arrive, each wanting a room. Whom do you give the rooms to?" So much for flight attendants merely pushing drink carts. Emirates is looking for social skills.

The next elimination round resembles a TV talent show. Head hunter el-Haber hands out two sets of letters. One reads "Congratulations, you have been successful through to the next stage," and the other "Unfortunately …" The 19 applicants in Stuttgart are first whittled down to eight. The last five face two final hurdles: Psychological testing and an individual interview.

Although candidates tend to disregard the downsides to their dream job, talent scout el-Haber has no qualms talking about them. Whereas Lufthansa flight attendants fly about 80 hours a month and get bonuses from 71 hours upward, their counterparts at Emirates may clock up as many as 100 hours a month. Added to this, recovery times at destinations are also shorter on Emirates than on Lufthansa -- usually only 24 hours.

Still, Emirates provides free accommodation at the airline's own apartment buildings, even though the rules and regulations are reminiscent of those at nurses' dormitories. While everyone has their own bedroom and bathroom, employees must share communal living rooms and kitchens -- strictly divided by gender. Visits by members of the opposite sex are not permitted after 1 a.m. unless they too are Emirates employees or relatives. "If you let your boyfriend stay overnight nonetheless, and he gets violent, you needn't bother calling the police," el-Haber explains at the recruiting event. "They won't do anything because you've already broken the law."

Public displays of affection are forbidden in conservative Dubai, and so is pregnancy out of wedlock. Flight attendants with same-sex partners also have -- to put it mildy -- problems being accepted in the United Arab Emirates. But the aspiring flight attendants in Stuttgart aren't put off by the restrictions. The only potential hurdle therefore is the question of pay, but even that is unlikely to discourage people from moving to Dubai.

On average, new employees at both Lufthansa and Emirates earn just under €2,000 a month plus bonuses. While Germans have their earnings taxed and must pay both health insurance and pension contributions, that's not the case in tax-free Dubai. Emirates staff have to get these through the private sector.

It remains to be seen how many of the successful applicants from Stuttgart will end up working for Emirates. But it's already certain that none of them will be starting in Dubai before the end of the year.

That's because the Emirates training center on the Persian Gulf is currently operating 24 hours a day. It houses facilities for retrofitting aircraft cabins, a makeup and clothing studio and a huge pool for emergency landing exercises. New employees can wait up to seven months before commencing training because Emirates can't train new flight attendants as quickly as it needs them. That's a problem Lufthansa would love to have.