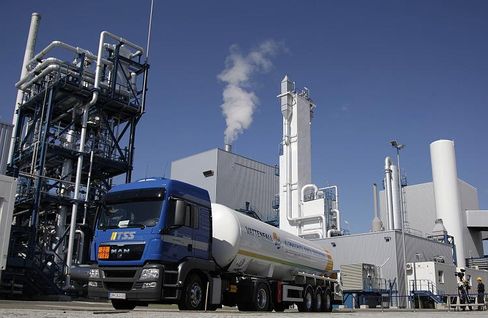 At a power station in northeastern Germany, several buildings stand alongside the main 1,600-megawatt coal-fired power plant. To the average visitor, the complex -- made up of warehouses, silos, and pipelines -- is indistinguishable from any other industrial park. But for Swedish utility Vattenfall, which owns the project, it represents a bold new future. That's because the buildings contain a pilot 30-megawatt power plant fitted with new technology that could virtually end carbon dioxide emissions from the world's heavy industry.

The technology is called carbon capture and storage (CCS), and if it fulfills its promise, it could someday turn highly polluting power stations and smelting plants into eco-friendly, carbon-neutral businesses. The premise of CCS is simple: Trap carbon dioxide before it's emitted into the atmosphere, transport it through pipelines to storage facilities, and then pump the CO2 underground where it can't escape into the atmosphere.

All three parts of the process have been commercial for decades, but they haven't been used together in a concerted effort to halt the release of greenhouse gases. Now, with pressure growing to combat global climate change, utilities and other heavy industry are looking more seriously than ever to CCS as a potential solution to their emissions problem.

It sounds like the Holy Grail of climate change policy. But not everyone is convinced CCS is the right answer. Some questions still remain over whether carbon dioxide can be stored safely underground for the long term. And there are rival technologies in the works -- some at roughly the same stage of viability -- that involve treating or processing fossil fuels before they are combusted to reduce their carbon output.

Still, CCS looks to have the most momentum at the moment. Pilot projects are under way in the US, Canada, and Australia, but it's the European Union that is at the forefront of CCS development thanks in part to its stringent carbon-reduction policies, which include the world's largest CO2 cap-and-trade system and a commitment to cut emissions 20 percent by 2020. That regulatory support, combined with EU financial backing for CCS projects, has allowed European utilities to push ahead of foreign rivals. Companies like Germany's RWE and Italy's Enel, as well as oil majors BP and Shell, all have announced CCS plans, which could be up and running across Europe by the middle of the next decade.

"The EU wants to be seen as taking a lead in the development of CCS," says Robin Cohen, an economic consulting partner at Deloitte. "The next step in the process is to create a regime that gives companies confidence to invest in the technology."

If European companies can perfect CCS, its impact on global climate change policy could be immense. Coal power plants, for example, constitute two-fifths of the worldwide energy mixa percentage that will rise to almost 50 percent by 2030. Emerging giants China and India are unveiling a new coal-fired power station each week and the US generates roughly half of its annual electricity from coal. Beyond the energy sector, other industries, such as oil refineries and steelmakers, also could use the technology to reduce their CO2 emissions by an estimated 80 to 90 percent -- and someday, to near zero.

The biggest remaining hurdle is economic. Taking CCS from small pilot projects to industrial scale will require working down its price, which now can add 30 to 60 percent to the cost of generating electricity. Consulting firm McKinsey figures that adding CCS to the next generation of European power plants could lift their price by up to $1.3 billion (€1 billion) each. But as more utilities adopt the technology, its cost should more than halve by 2030, with yet further declines as it spreads around the world.

The Influence of Emission Trading

The large up-front costs -- and lingering technical issues over making CCS work -- help explain why some companies, particularly in North America, have balked at investing billions of dollars to develop the technology. Yet by combining the climate change agenda with energy policy, Europe has provided the economic incentives to push forward with the technology that are currently missing elsewhere -- though the U.S. is likely to provide more such support under President-elect Barack Obama.

The EU Emission Trading Scheme, which assigns an amount of CO2 companies can emit each year, then allows them to trade these allowances in an open market, is a clear example. The system sets a base price for releasing carbon dioxide, with the current cost standing at roughly $24 for each metric ton of CO2 output. Analysts expect that number to rise to at least $50 per metric ton by 2020 as it becomes more costly to pollute. McKinsey estimates CCS projects will become financially viable at carbon prices between $45 and $64 per metric ton, so Europe's cap-and-trade scheme may provide the economic incentive companies need to invest in CCS.

"The cost of CO2 abatement has to increase in the future to allow coal-fired plants with CCS to be competitive," says Colette Lewiner, global energy, utilities, and chemicals leader at consultancy Capgemini.

Europe's carbon market should make CCS financially viable in the medium term, but high research and development costs over the next five years still represent a major impediment. Experts reckon the first European demonstration projects, for example, become economical only at a carbon price between $77 and $116 per metric ton -- more than three times the current cost. To help offset this initial financial burden, the European Parliament last month proposed a fund of at least €10 billion ($12.9 billion) to subsidize the first generation of CCS projects. Though the plan still must be approved by EU politicians, the European financial support would be six times larger than the US Energy Dept.'s funding for CCS. The EU also has financed multimillion-dollar research into the commercialization of the technology.

"The EU must help finance flagship programs. If it doesn't, the projects won't be affordable for utilities," says Andrea Valcalda, head of innovation and environment at Italian utility Enel. On Oct. 21, Enel and Italian energy firm Eni announced plans for a pilot coal power plant with CCS that will begin operation in the second half of 2009.

In addition to financing, CCS also must face down critics from the environmental community, who would prefer a policy response that de-emphasizes fossil fuels in favor of renewables. Greens see CCS as a technology that permits the "dirty" coal industry to keep going -- albeit in less polluting form -- rather than being phased out. According to a recent Greenpeace report, "CCS is being used as a justification to keep building inefficient, poorly constructed coal-fired power stations."

That may be so, but Europe is going to continue to need its polluting power stations and heavy industry for the foreseeable future. By investing in ways to slash CO2 emissions, analysts say, Europe could turn these carbon-intensive industries into new poster children for the Old World's attempts to combat climate change. Says Capgemini's Lewiner, "Coal is going to stay as an important source for electricity generation, so it's certainly better to have CCS than not."