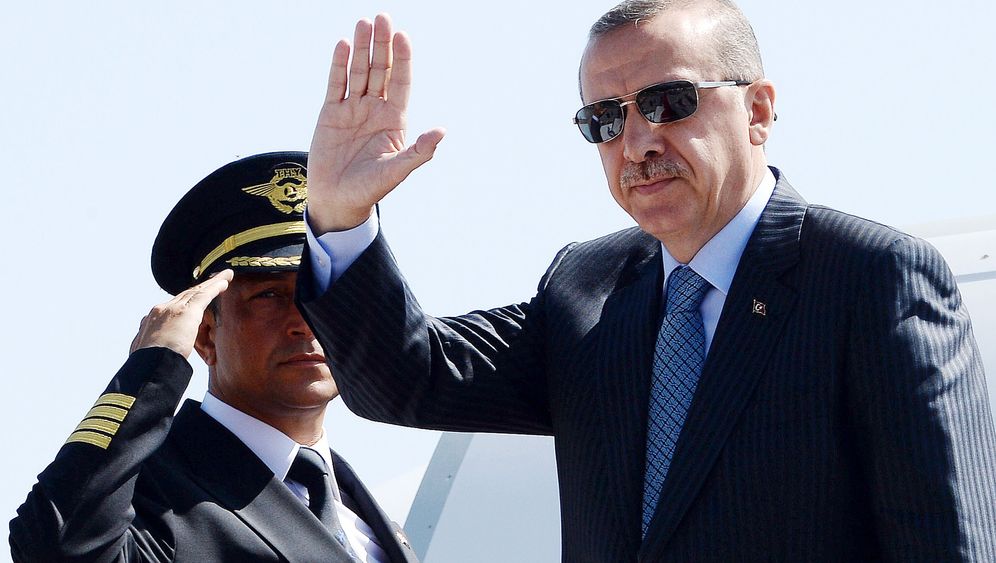 In a café some distance from the office towers, Umut Keles, a Turkish analyst with an American investment bank, removes the battery from his mobile phone, afraid of being wiretapped by the Turkish government. He is speaking with us under two conditions: That we not use his real name or that of his employer. The investment banker believes that the government would take action against him if it knew his identity. "There's a witch hunt underway here at the moment," he says.

Levent is Turkey's financial center, home to the offices of banks like HSBC and Deutsche Bank, as well as several corporations. They helped finance the Turkish economic boom in recent years, but now the government suspects them of supporting putschists and terrorists. "We're all afraid," says Keles. Some of his colleagues are thinking about leaving the country for good.

For more than two months now, people in Turkey have taken to the streets to protest against the government of Prime Minister Recep Tayyip Erdogan. The police have brutally crushed the protests, which began as a campaign against the removal of trees in Istanbul's Gezi Park. At least five people have already died in the demonstrations, and about 8,000 have been injured. But Erdogan says the violence wasn't caused by his government or the security forces. Instead, he claims that the unrest is the work of domestic provocateurs and their foreign collaborators.

In the hunt for someone to blame, the Turkish government is increasingly setting its sights on one group: the financial industry. In the first weeks of the revolt, Erdogan was already agitating against the foreign "interest rate lobby," vowing to "choke" speculators. His deputy, Beir Atalay, claims that the "Jewish diaspora" is behind the protests.

Seeking Scapegoats in The Financial Sector

The government has since launched investigations into the stock market. In recent weeks, the authorities have collected the emails, telephone records and chat messages of various international financial institutions, including Deutsche Bank, Credit Suisse and Citigroup. The government is now reviewing the banks' communications with their foreign customers since the protests began in Turkey, as well as scrutinizing accounts. The investigators are searching for evidence that regime opponents manipulated the markets to fuel the uprising against Erdogan. Keles says that he no longer dares to advise clients to sell Turkish securities, fearing that he could be arrested and charged as an enemy of the state.

"All rationality seems to have been lost in the search for a scapegoat," says Timothy Ash, chief economist for emerging markets at Standard Bank in London.

Opposition politicians, attorneys and journalists have been exposed to government repression in Turkey for years. But now Erdogan's aggression is also being directed against the economic elites for the first time. The premier has accused Koç Holding, Turkey's largest corporation, of "cooperating with terrorists." The Koç family controls more than 100 companies worldwide, including energy businesses, shipyards and supermarket chains, and it employs more than 80,000 people. During the Gezi protests, the Divan Hotel in Istanbul, also owned by the conglomerate, gave shelter to demonstrators fleeing police violence.

In late July, tax investigators accompanied by police searched 77 offices of the Koç energy companies Tüpras and Aygaz, and seized computers and documents. The parent company's stock price plunged after that, with Koç Holding losing more than €1 billion ($1.33 billion) in value within three days.

Erdogan's behavior is unsettling the markets, as investors question the country's constitutionality and stability. In the first three weeks of the unrest, investors sold off Turkish bonds and stocks worth more than $1.6 billion. The Turkish stock index fell by more than 20 percent, and the currency, the lira, also depreciated sharply.

The turbulence is affecting Turkey at an inauspicious time. Ben Bernanke, the chairman of the United States Federal Reserve, hinted at a stricter liquidity policy in May. Bernanke intends to pump less money into the markets in the future. This prompted investors to withdraw capital from emerging economies.

But Turkey is highly dependent on precisely those international financiers Erdogan is now targeting. During his term in office, from 2003 to 2012, foreign investors have pumped about $400 billion into the Turkish economy, compared with only $35 billion in the previous 20 years. The economic boom of the Erdogan years was fuelled primarily by euros and dollars, not the Turkish lira.

Erdogan's rise to political prominence began in the 1990s with a promise, namely that devout Muslims could also earn money. Muslim politicians, including Erdogan's mentor, former Turkish Prime Minister Necmettin Erbakan, had long equated the free market economy with the West and therefore rejected it. Erdogan, on the other hand, promoted capitalism. By 2001, the Turkish government and the secular, military establishment had driven the country into an economic crisis, and unemployment was at record levels. Erdogan seized the opportunity to form his own party, together with Abdullah Gül, the current president: the conservative Islamist Justice and Development Party (AKP). It won a surprising landslide victory in the parliamentary election a year later.

As premier, Erdogan pursued a largely neoliberal course. He privatized large government-owned companies like Türk Telekom, the oil and gas industry, and ports and airports, and he liberalized the labor market while simultaneously fighting inflation. Under Erdogan, the Turkish economy grew by up to 9 percent annually, and per capita GDP rose from $3,519 to more than $10,000.

For a long time, this success masked a structural deficit that the AKP didn't just fail to correct, but even promoted. For years Turkey, unlike Germany, has imported more goods than it exports, accumulating debt as a result. The trade deficit grew under Erdogan from $16 billion to $84 billion in 2012. Part of the Turkish economic miracle is built on debt.

Hamid Kiraz, a 36-year-old chemical laboratory assistant, is one of millions of Turks who benefited from this economic miracle. He recently bought a "TOKI" apartment in Kayaehir, a satellite city on the outskirts of Istanbul, for himself, his wife Gülçin and their two daughters.

Toplu Konut Idaresi Bakanligi, or TOKI, is the Turkish housing administration. The government builds massive high-rise housing communities throughout the country, and the apartments are sold at relatively low prices to applicants.

Instead of the usual statue of Atatürk, the secular founder of modern Turkey, Kayaehir's market square features a large TOKI statue dedicated to Erdogan, next to a mosque and shopping center, both symbols of the Erdogan government. The prime minister opened a new underground station in the neighborhood a few weeks ago.

Kiraz made a €10,000 down payment on his condominium. He will pay the remaining €30,000 in monthly installments of €240 each. He has six credit cards with four different banks, and he regularly exceeds his credit limits. He paid €800 for his Samsung smartphone, his two daughters, 8 and 10 years old, play with Toshiba laptops and their own smartphones, and there is a Panasonic flat-screen TV in the living room, "the top model," says Kiraz.

Kiraz and his wife have always voted for Erdogan's AKP. They believe that they owe their prosperity to the party, and they still defend the premier today, now that he has angered half the country in the wake of the Gezi protests. "The entire world envies us because of our prime minister, even the Greeks," says Kiraz. But even he is beginning to have his doubts. Everything he owns -- the apartment, the furniture, the phones -- was paid for on credit. He even uses credit cards to buy food. Kiraz has taken on a second job, together with his wife. They deliver food to businesses. He makes the deliveries, while she prepares the food, spending up to 15 hours a day, seven days a week, in the kitchen. When asked about their debts, they say: "We don't even want to know." Credit cards have made life more seductive, says Hamid Kiraz. "In the past, we would only buy something if we had the money. Now we just always buy."

The Kiraz family's budget is a microcosm of the Erdogan regime's budget. Economists warn that the Turkish economy could be overheating, and that a bubble has already developed in the construction sector. Real estate agents complain that they are having trouble selling properties. Erdogan, determined to keep the boom going, is ignoring the warnings. His government wants to build a "second Bosphorus" to connect the Sea of Marmara with the Black Sea. There are plans to open a new airport north of the city in 2019, which would be the world's largest airport, with six runways and the capacity to handle 150 million passengers a year.

The government needs capital for its many investments, but capital is in limited supply in the Turkish private sector. The protests against the destruction of Gezi Park showed that Turkish civil society is no longer willing to give unquestioning backing to the megalomania of its government.

As a result of the unrest of recent weeks, Erdogan has alienated foreign investors. Turkish opposition politician Aye Danioglu calls Erdogan's tirades against the financial industry "political suicide." A large share of international investments in recent years consisted of short-term commitments, known as fast money. When investors become nervous and withdraw capital, the economy faces the threat of collapse.

The Turkish central bank is already trying to tackle the problem. In early July, it sold foreign currency worth $2.25 billion to bolster its own currency. But the move failed to produce the desired effect on the markets. Economists believe that Turkey will now be forced to raise its prime rate even further. But this would make it more difficult for Turkish companies to invest and might even stall the economy. Last year, the Turkish economy grew by only 2.2 percent, compared with close to 9 percent in 2011. Erik Nielsen, chief economist at Unicredit, anticipates a significant decline in growth this year.

Erdogan now faces the worst crisis since coming into office. His success was based on his reputation for successfully managing the country. A weakening economy could spell trouble for him with regional and presidential elections only months away -- especially now that his rivals are already positioning themselves within the AKP.

International bodies like the Organization for Economic Cooperation and Development (OECD) recommend reforms to increase productivity in the Turkish economy. Too few women are in paid employment, and too many people moonlight or are insufficiently qualified. The gap between rich and poor is still one of the widest among all OECD countries. Most of all, however, Erdogan needs to fight corruption. Turkey ranks 54th on Transparency International's Corruption Perceptions Index, behind Georgia and Rwanda. In the embassy cables published by WikiLeaks, US diplomats report bribery at all levels. There are rumors that the premier himself lined his pockets during the privatization of a state-owned oil refinery, and that he has eight Swiss bank accounts. Erdogan denies this. Daron Acemoglu, an economist at the Massachusetts Institute of Technology, says that it is all but impossible to implement economic projects in Turkey without having close connections with politicians.

Erdogan seems to have no intention of making any changes. His chief advisor, Yigit Bulut, says Europe is a loser and is headed for collapse. Erdogan's strategist refuses to entertain the possibility of an economic crisis in Turkey. The country is on its way to becoming a global power, he says, and will soon be on a par with China and the United States.