In Estonia, public administration is completely digitalized. Residents can pay their taxes, register their cars and even set up a company online. It's not only convenient -- the country also saves around 2 percent of its gross domestic product by eliminating bureaucratic costs.

One person who has played a central role in Estonia's embrace of technology is President Kersti Kaljulaid. Now 49, she was only 46 at the time of her election, making her Estonia's youngest-ever head of state. Before taking office, she worked at the European Court of Auditors for 13 years. She also worked for a bank and a telecommunications group, and occasionally hosted a radio show.

DER SPIEGEL: Ms. Kaljulaid, Estonia, with its 1.3 million inhabitants, has given rise to four young companies worth more than a billion dollars each. Germany is 60 times larger, but at the moment, it only has nine such so-called unicorns ...

Kaljulaid: With all due respect, our benchmark is not Germany, but rather San Francisco and the Bay Area. And even in this comparison, we can be proud of our per capita figures.

Kaljulaid: The difference is less the creativity of the entrepreneurs. Our government is more innovative.

DER SPIEGEL: That sounds like the "active industrial policy" that German Economics Minister Peter Altmaier wants to pursue. Should the state ensure innovation?

Kaljulaid: Oh no! We Estonians believe in free markets. The government's task is to create a modern legal framework -- the private sector must take care of the rest. The public sector should by no means be a leader in new technologies. Nor can it. This can now be seen even in areas that have long been the domain of the state, such as military technology. They, too, are increasingly being developed by private companies. Google is the world leader in artificial intelligence, far ahead of all government agencies and governments. States cannot do their own research and development, but they must ensure that they can participate in these developments and, where necessary, use them militarily.

DER SPIEGEL: How do you define innovative governance then?

Kaljulaid: I remember the end of the 1990s when I was a consultant to the then-prime minister. As a small and then still very poor country, we realized that our opportunities lay in two megatrends -- IT and genetics. So we set up the Estonian Genome Foundation with startup funding of 3 million euros ($3.3 million) to improve the health of our population and reduce costs. Twenty percent of Estonians will have used our DNA analysis service by the end of this year and know which diseases they are susceptible to and how they can take appropriate precautions. I have an increased risk of Type 2 diabetes, as I know from my analysis. So I will avoid being overweight.

DER SPIEGEL: Countries should focus on accelerating digitalization in their area of responsibility?

Kaljulaid: They even have to if they don't want to become obsolete in the digital world, and they should hurry. In the analog world, it is still the governments that issue passports and identity cards. In the digital world, Facebook and Google are the biggest identity providers. And their customer accounts open up access to further services. But we can't leave the question of digital identity to companies. This is a field that governments must reclaim. And then, there can and should be something like a government app store, where developers offer their own services based on this digital identity.

DER SPIEGEL: Estonia is known as a startup location and a pioneer of modern digital administration. Setting up a company, paying taxes, registering a car, viewing health data -- you can do it all online. How far ahead of Germany are you?

Kaljulaid: It's easy to measure: We introduced our digital ID card in 2000. It then took six to seven years for a critical mass of citizens to use it. In Germany, the introduction of e-passport functions has only recently begun. So we are talking about an interval of almost 20 years. When we started, we would not have dreamed of that. At that time, we thought that a lead of at best three to five years was realistic. We did not expect large economies to allow themselves to fall so far behind in digitalization.

DER SPIEGEL: It wasn't due to a lack of awareness. Back in 2000, then-Chancellor Gerhard Schröder promised Germans they would soon be able to do all important administrative work online. In your opinion, why did this fail?

Kaljulaid: Well, his government implemented the Hartz 4 reforms (Eds: deep cuts to Germany's welfare payments for the long-term unemployed and labor market reforms that are widely credited in the turnaround of the country's economic malaise). That was also innovative action. The other 50 percent probably fell by the wayside. But I see a lot of movement now. Yes, you are behind, but if such a strong and resourceful country really implements a plan decisively, then it will succeed. It's about time.

Kaljulaid: The possibility of signing documents and administrative files electronically alone saves us around 2 percent of our gross domestic product every year. That's roughly equivalent to our defense spending. However, we also invest about 1 percent each year to further develop our government online services. And we must continue to do so.

DER SPIEGEL: Is that still necessary? You advertise with your leading position within Europe.

Kaljulaid: The demands of our citizens are growing. For example, they want the state to actively inform them in advance if their passport or other official documents will expire soon. Many also do not understand why they have to apply for certain benefits at all. A benefit scheme for elderly single people is therefore already available on a trial basis, to automatically be provided without an application. Citizens do not even need to know that they are entitled to it. Our investments are money well spent. We have noticed that small and medium-sized enterprises in particular are benefiting greatly. And digitalization also has desirable social side-effects.

DER SPIEGEL: In what way? Many people fear that it will exacerbate a social divide.

Kaljulaid: When we put our faith in the digitalization of administration in the 1990s, we did so because the Estonians wanted social benefits like in the Nordic countries. We could not afford that. That is why we at least wanted to make it easier and more convenient to access the resources and services available. It is mainly women who benefit from this, because in Estonia, too, it is they who mainly look after children and relatives in need of care. They gain a great deal of time by reducing bureaucracy, so digitalization has a socially harmonizing and balancing effect.

DER SPIEGEL: To German ears this sounds almost exaggeratedly euphoric. The Estonian digital ID is mandatory. What about citizens who feel overwhelmed or who reject it?

Kaljulaid: Our experience is that technology does not split our society. But you must take the citizens with you. For example, in the beginning there were special trainings for older citizens to teach them about digital services. Private providers such as banks have also provided free services for ID users.

DER SPIEGEL: The Estonian economy has been growing strongly for years, but the IT sector accounts for less than 10 percent of the overall economy. Have people overestimated the Estonian digital miracle?

Kaljulaid: No, because digitalization is spreading through all sectors. Take our state-owned forestry operations. They use a database technology developed in Estonia. Our entire stock of timber is included, and if you buy a finished table, you can see in which part of the country the wood was grown. However, the increased productivity is not recorded in the IT sector, but in the timber industry, and it is like that in other sectors as well. But the truth is: We are catching up in terms of productivity, but many German companies are still far ahead of us here.

DER SPIEGEL: Where and how do Estonian startups find personnel among the country's small population? The lack of IT specialists is one of the reasons Germany is lagging.

Kaljulaid: We make it easy for people from elsewhere to work for Estonian companies. Our digital economy is not bound to one place, companies can look for their personnel where work is cheaper or where there is a high unemployment rate -- we have rigorously dismantled all legal hurdles and restrictions. My son is currently working on IT projects for the Middle East and Africa, his programmers are based somewhere in southern Europe. We also have special work permits for startup employees and our e-residency program, which allows you to start a business in Estonia from anywhere in the world. Because of Brexit we have an increasing demand from Brits. With our "Career Hunt" program, we invite international IT experts to job interviews in Estonia and even cover the travel expenses.

DER SPIEGEL: Aren't you making yourself too dependent on IT with your digitalization efforts? After all, cyberattacks almost paralyzed your country at times in 2007. Some people were already talking about the first real cyberwar.

Kaljulaid: It actually was. There were demonstrations by the Russian minority in the country at the time, during which windows were smashed and cars lit on fire. And these cyberattacks from the Russian side accompanied them, which was a first. Since then, we have protected our systems even better, but we as states finally need an international agreement to regulate such conflicts. Turning off the internet can hardly be the solution. Rogues can be found online as well as on the streets -- and so far no government has abolished streets. 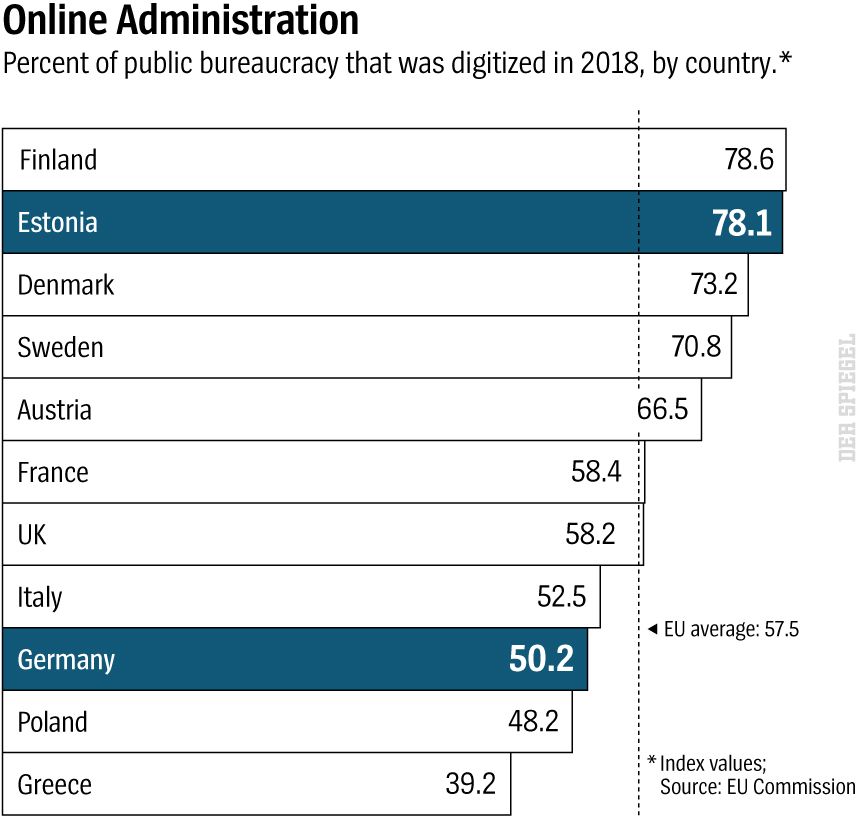