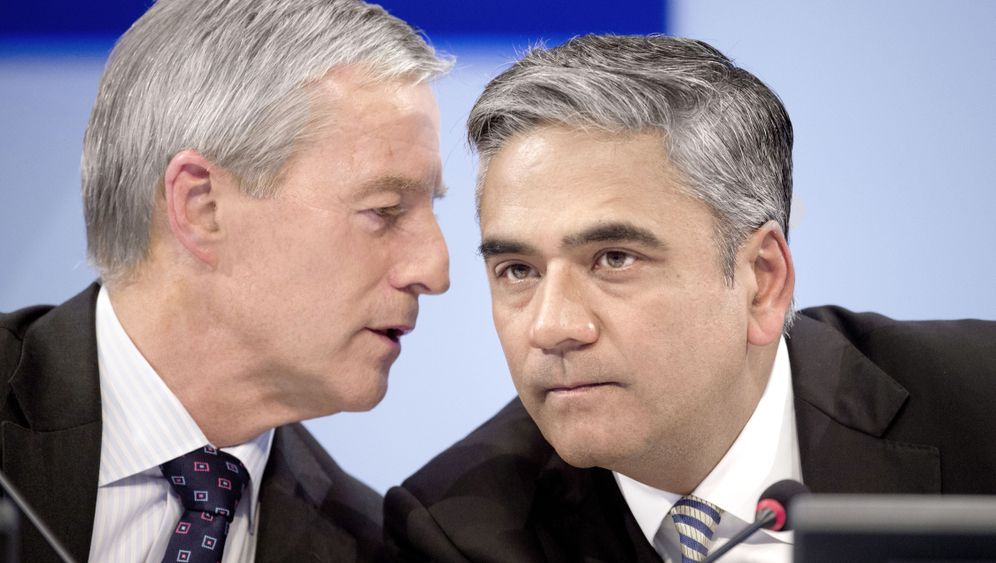 If Anshu Jain and Jürgen Fitschen had been searching for a title for their joint appearance last week, "The Inseparables" would have been a fitting choice. The new co-CEOs of Deutsche Bank were constantly putting their heads together, whispering to each other and then turning to the assembled journalists in Frankfurt to explain that they -- "Jürgen and I" or "Anshu and I" -- planned to turn Deutsche Bank into a better company.

But to the two men, another message was even more important than the avowal of their close partnership, namely that Deutsche Bank, too, is inseparable.

Jain and Fitschen made it clear that they intend to transform Deutsche Bank into the world's leading universal bank. When responding to the question of what would happen to their strategy if politicians were serious about their plans to split up large banks, the two top executives feigned innocence. "We have no plan B," said Fitschen, noting that they had not received any indications from Brussels or Berlin that there was any need for discussion of any such eventualities.

Apparently they haven't been listening. Discussions have indeed been going on for some time, in Berlin and, most of all, Brussels.

The European Commissioner for Internal Market and Services, Michel Barnier, a former French cabinet minister with snow-white hair, is the most feared of the Brussels commissioners in European financial centers. He is already responsible for more than 30 EU regulations decreeing how banks and other financial market players are to do business in the future.

Nevertheless, Barnier has shied away from a structural reform that would affect Europe's major lenders. He is part of the power elite in Paris, which has close ties to large French banks like BNP Paribas and Société Générale. Only after extensive plans for the restructuring of major banks were discussed in the United States and Britain did he ask Erkki Liikanen, the governor of Finland's central bank, to assemble a commission to investigate structural reforms that could lead to the splitting up of major banks.

Liikanen has put together a group consisting of economists, bankers and industry representatives. Ironically, there is one member of the group with whom Jain has a less affectionate relationship than he does with Fitschen: Deutsche's former Chief Risk Officer Hugo Bänziger, who would have liked to become CEO himself and who could now become a problem for his erstwhile rivals.

The 11 experts have been instructed to pay particular attention to reforms in the United States and Britain. In the United States, the so-called Volcker rule largely prohibits banks from engaging in risky trading activity for their own accounts. The Vickers Commission in London has put forward proposals aimed at separating capital market transactions from banking activities that are vital to the functioning of the economy and the financial system, namely the lending and deposit business.

In Europe, breaking up the banks was long seen as more of a subject for armchair economists than a real prospect. But in recent weeks, even corporate leaders like Nikolaus von Bomhard, head of the insurance giant Munich Re, and Klaus Engel, CEO of chemical manufacturer Evonik Industries, have conceded that they would like to see a separation between high-risk investment banking and other bank operations.

Despite numerous reforms in the financial sector, there is one problem regulators have yet to solve: Many banks are so big that no country can afford to allow them to fail. This is why the government bailed out a number of financial companies starting in 2008, a move that allowed major banks like Deutsche Bank to grow even larger.

"Taking a more-of-the-same approach in the treatment of major banks is not an option", warns Daniel Zimmer, head of the German Monopolies Commission. "First of all, in contrast to 2008, many countries no longer have the resources to bail out banks. Second, taxpayers are no longer willing to foot the bill for the financial industry's mistakes."

But what can be done? Zimmer notes that Germany has already taken steps in the right direction. Under the new German restructuring law, when a bank is in trouble the most critical parts of the institution can be transferred to a bridge bank, allowing the remainder to be liquidated. In such cases, the shareholders and most of the bank's creditors would not be compensated. A fund made up of contributions from banks would cover restructuring costs.

But there is a problem with the new system. "In a worst-case scenario, a bank has to be split up into vital and other parts within a single weekend," says Zimmer. "This is only possible if there is already a clear separation between the two parts beforehand." This is why Zimmer believes it makes sense to establish the dividing line in advance, in a manner similar to what Britain's Vickers Commission envisions.

Bank executives point out that it was precisely specialized banks like Lehman Brothers and Hypo Real Estate that failed in 2008 and threatened the financial system, whereas universal banks are more stable.

Banks Could Submit Liquidation Plans in Case of Crises

This reflects the official position taken by Germany's central bank, the Bundesbank. But Andreas Dombret, the board member responsible for financial market stability, who worked for investment banks for many years, disagrees. "I support a system of universal banks, as long as we can find a solution to the too-big-to-fail problem."

Dombret doesn't want to achieve this through a mandatory spinoff of the banks' investment banking arms. Instead, he believes that banks and regulators should agree on coordinated restructuring and liquidation plans that, in the event of a crisis, facilitate splitting off the investment banking business and safeguarding the critical parts of a bank. "Only if this doesn't work should we consider a solution that involves splitting up the banks." This, says Dombret, could mean that various parts of a bank are made legally independent while remaining bundled together within a holding company.

In the United States, global financial companies are already required to submit to regulators the kinds of liquidation plans Dombret describes. A law proposed by the European Commission this summer would also require European banks to submit such plans.

The 29-page executive summary of the liquidation plan Deutsche Bank submitted to US regulators reveals how complex this can be. Under the plan, some 1,113 subsidiaries and 1,504 special-purpose entities would have to be disentangled in the event of a crisis.

Experts question whether the massive plans would work in an actual crisis. "As long as the investment banking and private customer businesses are tightly interwoven, the two parts can't be liquidated separately," says a member of Liikanen commission. For this reason, he adds, the investment bank's financing cycle would have to be separated from the remainder of the business.

Dirk Bliesener, a partner in the law firm of Hengeler Mueller, goes even further. "If you want a structural delimitation of certain parts of investment banking, it isn't enough to merely disconnect refinancing from the rest of the bank. The two parts would also have to be separated legally." But whether this truly suffices to prevent an imbalance is heavily dependent on individual circumstances, Bliesener adds.

The most important thing is to isolate the trading business, in which banks engage in high-risk activities. But Christoph Kaserer, a banking expert at the Technical University of Munich, also advocates separating payment transactions from the lending business, so as to ensure that when a credit bank runs into trouble, millions of companies and households can continue to process payments. Financial companies could continue to service customers with loans and capital market transactions if all areas were bundled under the umbrella of a holding company, says Kaserer.

The consequences of banks having to corral their investment banking operations would be drastic. With the elimination of the implicit government guarantee and cross-subsidization through deposit customers, funding this business could become too costly to be worthwhile for some providers.

The result would be a long overdue market adjustment. "A separated banking system would be good for competition," says monopoly expert Zimmer.

The banks are resisting the plans being hatched by the Liikanen group, and they have powerful advocates. In a Sept. 6 letter to Barnier, major French corporations GDF Suez and Lafarge strongly oppose the revolution in the European banking industry. They write that companies need large, efficient financial groups with international networks that are at home in all global markets. "These goals are more likely to be met if the model of a diversified, 'universal' bank is retained," reads the letter, which was also sent to Liikanen.

Senior European Commission officials are already signaling that Liikanen will not propose a radical solution such as a breakup of large banks. "A compromise is taking shape that amounts to the isolation of investment banking within the companies," say sources in Brussels.

At last Saturday's meeting of European Union finance ministers in Cyprus, Liikanen, together with Barnier, described the current status of discussions within his group. But according to one member of the commission, the group has not reached a consensus yet and is still deliberating.

Meanwhile, Jain and Fitschen continue to march steadfastly in the opposite direction. Last week, they announced their intention to further strengthen consolidation among all segments of the bank. 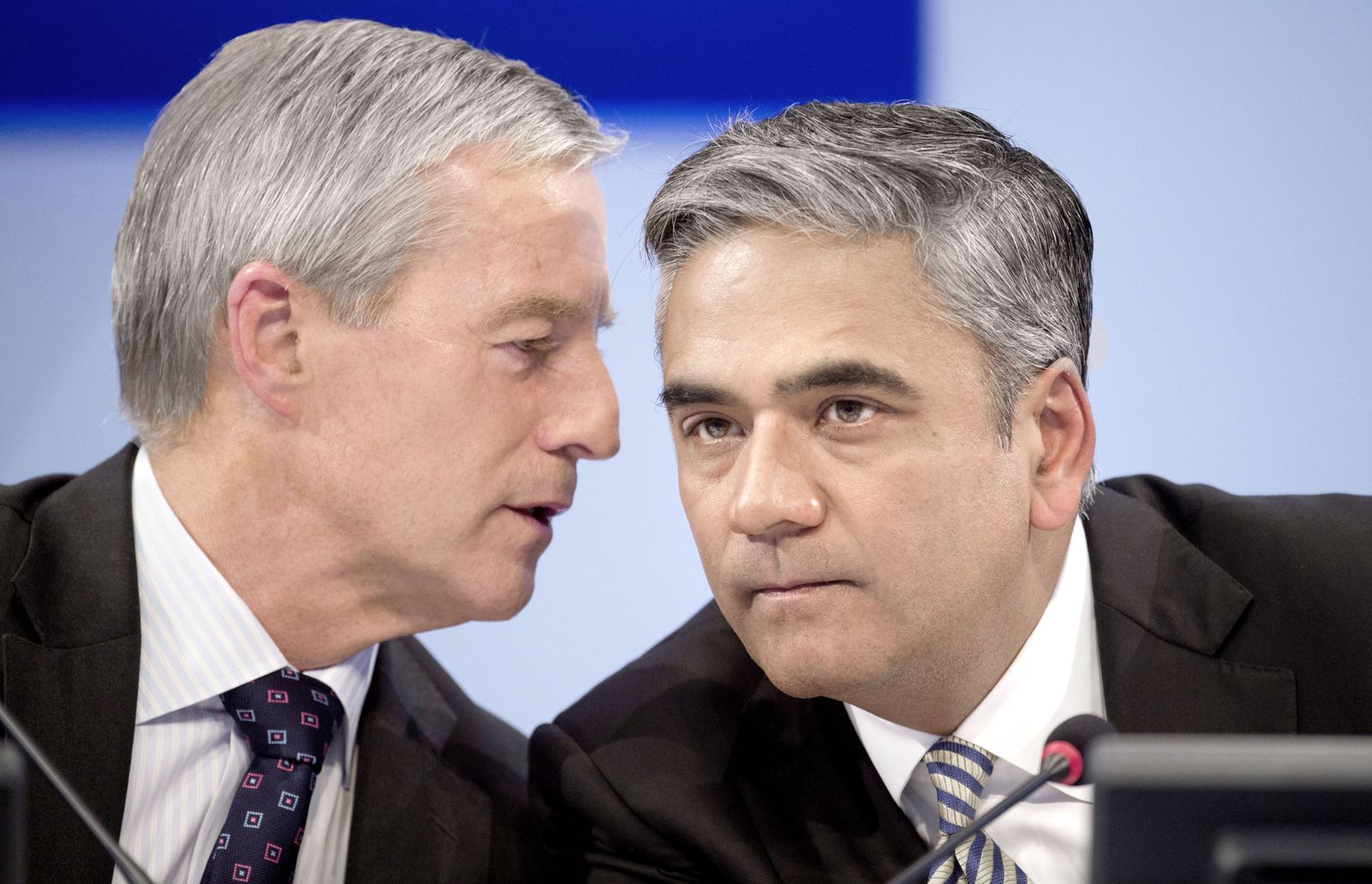 The two co-CEOs of Deutsche Bank, Jürgen Fitschen (L) and Anshu Jain (R), want to turn their company into the world's leading universal bank and see no need to discuss the possibility that they may have to split capital market activities from traditional banking. 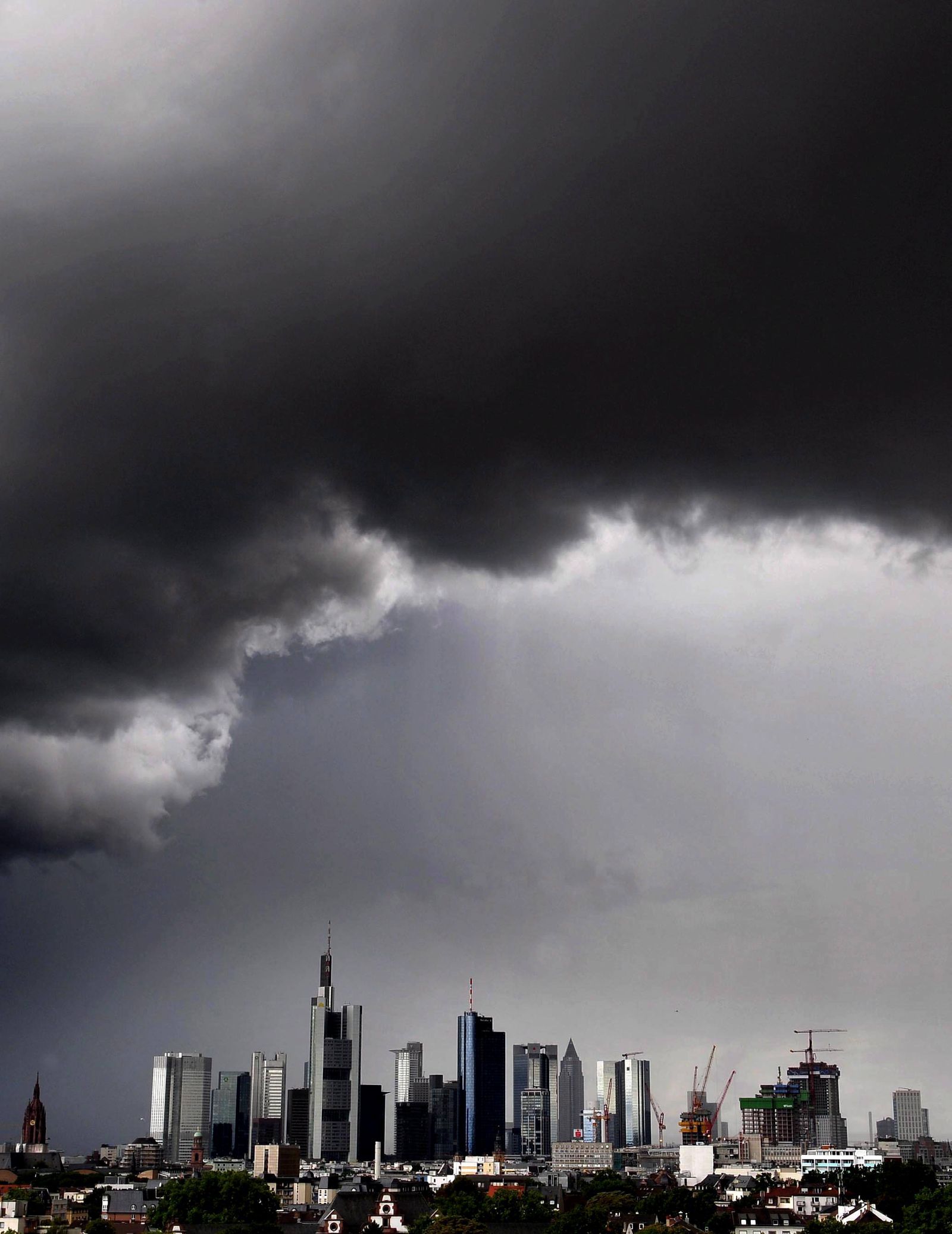 Bank head offices in Frankfurt, Germany's financial capital. Change may be looming for Europe's banks. The EU Commission has instructed experts to investigate structural reforms that could lead to splitting up the major banks. Despite numerous reforms in the financial sector, there is one problem regulators have yet to solve: Many banks are so big that no country can afford to allow them to fail. This is why the government bailed out a number of financial companies starting in 2008, a move that allowed major banks like Deutsche Bank to grow even larger.