When Bernd Lange talks about the advantages of a free trade agreement with the US, he often cites the example of the VW bus. The hippy favorite has been the target of a 25 percent tariff since 1964, a punitive move after the European Economic Community raised levies on imported chicken, shutting the Americans out of the market. Sales have been hampered for decades as a result. But if the levy were significantly reduced, its price tag would plunge.

Lange is a classic car enthusiast -- and the chair of the European Parliament Committee on International Trade, which focuses on the Transatlantic Trade and Investment Partnership (TTIP) treaty. But despite the possible benefits for Volkswagen, the Social Democrat has had little choice but to emphasize the negative aspects of TTIP during his public appearances. In Europe's leading exporting nation, broad swathes of the population are opposed to the free trade agreement. You can even find anti-TTIP flyers in many churches.

The main sticking point is special rights given to investors, who would be able to challenge countries in special international dispute settlement panels that bypass national courts. It's a pill that even those who believe in the deal are having difficulty swallowing. Some 145,000 European citizens voiced their disapproval in a "public consultation" undertaken by the European Commission, with many expressing fear that US companies might seek to overturn EU laws on genetic engineering, environmental protection and food quality.

"This is indeed a very toxic issue," European Commissioner Cecelia Malmström, who is leading negotiations with the Americans, admitted last fall. But rather than addressing the widespread criticism, it instead appears she is playing for time.

It's also possible that Malmström is merely trying to give US president Barack Obama a helping hand given that he's still battling to get Congress to grant him permission to strike a deal with the Europeans. If it doesn't, "TTIP will be dead for a long time to come," say insiders like Lange.

Now Malmström is frantically seeking out a new position. Resistance to the treaty is not only growing in the member states, but a majority in the European Parliament also opposes the agreement. Parliamentarians made clear back in 2011 that they would not accept any provisions allowing anonymous arbitration panels with the ability to overturn national law. "It's time for the Commission to abandon the position it has charted thus far and set a new course," Lange says.

Canadian experiences suggest that the Europeans' collective fears are warranted. During negotiations for the North American Free Trade Agreement (NAFTA), the Americans prevailed in pushing through wide-ranging investor rights, going far beyond what had previously been standard in older US trade agreements, including the one it has with Germany.

Now litigious US companies are bullying the Canadian government. In one instance, it was about the right to shoot 360 caribou on a Canadian nature preserve. In another, it was about the large-scale extraction of tar sands that had been limited in one Canadian province due to environmental protection considerations.

In 2011, the government of the province of Québec decided to impose a moratorium on drilling for gas and oil under the St. Lawrence River. Canadians have generally been quite open to new fracking technologies, but not when it came to deploying them underneath such an important waterway.

In response, Lone Pine Resources, an American firm, sued for $245 million in damages at an international arbitration court. The company claimed that the decision by the Quebec government to cancel a natural-gas exploration permit for its Canadian subsidiary had been "arbitrary, capricious and illegal." In its arbitration suit, the company said the decision had been made "without a penny of compensation." As in all the other cases, Lone Pine Resources explicitly invoked NAFTA's Chapter 11 investor protections.

The arbitration court still hasn't reached a decision in the case. And investors don't always prevail in arbitration proceedings. But there is a tendency on the part of judges to give a high priority to companies' rights.

'Countries Practically Kneel Down Before Us'

Giving business interests a priority is practically "inherent to the system," says Gus van Harten, a professor of international law in Toronto. Van Harten has spent years researching arbitration court rulings and says he finds the entire proceedings to be dubious. The changes they have forced, he adds, have been historic in scale. "The countries practically kneel down before us," one attorney at a law firm specializing in arbitration once said, van Harten claims.

In most cases, arbitration courts meet in secret and their rulings often aren't even published. The panels seldom include more than three judges. Some warn this could mean that important political decisions in the future are made by a handful of powerful lawyers.

Investor protection lawsuits are becoming increasingly popular among companies in the energy and natural resources sectors. The US firm Windstream Energy, for example, wanted to erect 100 giant offshore turbines on Lake Ontario. A contract had been signed in the deal, but it duly noted that not all of the relevant government permits had yet been issued. Nonetheless, the company sued for $465 million in damages when the provincial government expressed its intention to undertake an additional review on the project's impact on the lake.

As in other arbitration cases, the lawsuit Windstream lodged against the Canadian government claimed that officials (in this instance in the province of Ontario) had acted in ways that were "arbitrary, irrational and discriminatory." The administration had to hire expensive lawyers to defend itself. Van Harten says he has observed a shift in Canadian politics as a result of the treaty and that legislators are now acting more hesitantly, out of fear of litigation.

Ever since these clauses started becoming commonplace in trade treaties, companies like Exxon and Dow Chemical have invoked investor protection measures in close to 600 different cases. Germany has also been forced to defend itself in private courts. Currently, Swedish energy giant Vattenfall is suing Berlin for damages relating to the forced closure of its nuclear power plants as part of Berlin's Energiewende plan to shift from atomic to renewable energies. The plan entails the closure of all of the country's nuclear power plants by 2022 and for renewable energies to comprise 60 percent of Germany's energy mix by 2060.

Still, backers of TTIP are keen to point out that Germany hasn't been hit by very many of these suits, despite having signed well over a hundred trade deals. What they don't mention, however, is that, Germany doesn't have any comprehensive investor protection provisions in the trade deals it currently has on the books with the United States. If TTIP were to go into effect as envisioned, it is likely that Germany would face an increase in the number of legal challenges similar to that experienced in Canada. "I see potential for many new cases," says van Harten.

'Law of the Strongest'

So far, companies have largely focused their sights on developing nations, which are forced to accept these kinds of provisions just to be granted the right to export to rich countries. "Investor protection is traditionally a law of the strongest," says Natacha Cingotti of the non-governmental organization Friends of the Earth. In Central America, the mere threat of expensive proceedings by the Americans has often been enough for them to get what they want.

That's not always the case though. Six years ago, the Australians prevailed in removing provisions for investor protection in a trade agreement reached with the US. Now TTIP opponents in the European Parliament argue that Brussels must take its cue in negotiations from the Australian government's success. "ACTA showed that things can move very quickly," says Ska Keller, the Green Party's trade policy spokeswoman. Two years ago, a few mass protests proved sufficient to doom the anti-counterfeiting deal in European Parliament.

Critics of TTIP are united in their opposition to special rights for investors. A handful of Democratic members of Congress has even called on Obama to exclude the controversial rules from negotiations. Their calls are backed by Richard Trumka, the president of the AFL-CIO union.

German Economics Minister Sigmar Gabriel has proposed the creation of an International Trade Court to arbitrate conflicts as an alternative. Even EU Commissioner Malmström says "that would be the best solution." But, she adds, it is unlikely this will happen given that the idea has been discussed for years within framework of multi-national trade talks without bearing any fruit.

Nevertheless, perhaps the US and Europe could agree on a common public court for their conflicts. Doing so would not only create a new global standard for trade conflicts. It might also make people less averse to the idea of investor protections. 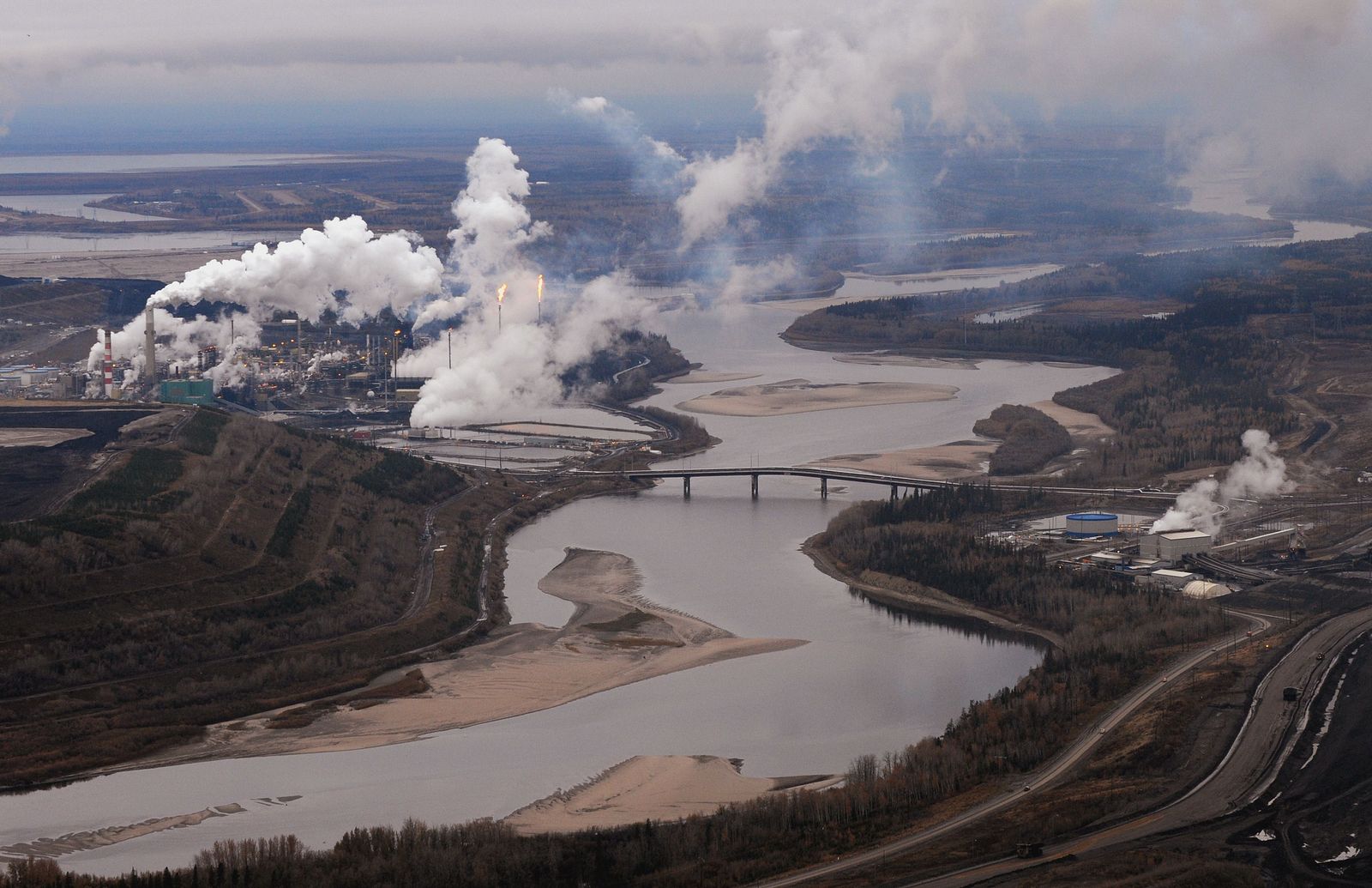 A tar sands extraction plant on the Athabasca River in Alberta, Canada.