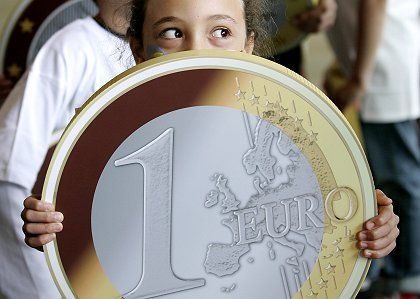 Europe's currency is getting stronger and stronger.

The euro just keeps rushing to new all-time highs against the dollar. On Thursday, the European currency was briefly worth $1.38 in the early afternoon before slipping back slightly. But while German industry on Wednesday expressed concern that a strong euro was eating into their profits and competitiveness, European officials on Thursday said there was nothing to worry about.

"That is an exchange rate that we can live with," said German Economy Minister Michael Glos on Thursday at a German-Arabic business conference. "The economy is doing great. There are no worries at present."

The value of $1.38 beat the record set the previous day when the currency spiked up to $1.3784, and analysts say there is little to indicate that the euro's strength will wane any time soon. Indeed, given worries over the strength of the US economy, many expect that the euro will climb further to a rate of $1.40 or even higher.

Despite Glos' equanimity, German industry on Wednesday complained that the strong euro was not good for business. A spokesman for Germany's machinery manufacturing industry told the Süddeutsche Zeitung that a number of companies were having trouble competing against foreign companies this year due to the strong euro. The country's automobile industry likewise told the paper that it has felt the effects of the currency's strength.

"The currency's development is causing us to become more and more concerned," Matthias Wissmann, president of Germany's federation of automakers, told the Süddeutsche Zeitung. The strength of the European currency makes products from eurozone countries more expensive abroad -- or can decrease profits in the US if companies try to keep dollar prices constant. Indeed, the strong euro has Volkswagen thinking about opening up a factory in the United States.

Wissman said that an exchange rate of $1.40 or higher would be damaging to German car makers. Indeed, BMW claims that a strong euro throughout 2006 resulted in lower profits last year -- to the tune of €666 million.

But European politicians have come out this week urging calm. Portuguese Finance Minister Fernando Teixeira dos Santos -- whose country took over the rotating European Union presidency at the end of June -- said on Thursday that a strong euro was "not a problem" for the European economy.

"I don't think  that we have a problem in exchange rates at the moment," he told a European Parliament committee. "Let's not fall into temptation to resolve our economic problems by devaluing. If we want to gain competitiveness it's not by devaluing our currency."

He was echoing statements made by German Finance Minister Peer Steinbrück on Wednesday. "The competitiveness of European economies will not be decided on the currency markets, rather by their abilities to restructure and to innovate," he said.

The euro wasn't the only currency flying high on Wednesday. The British pound hit a 26-year-high against the dollar of $2.0334 before edging down slightly on Thursday to $2.032.

Both the European Central Bank and the Bank of England have maintained high interest rates -- with England boosting rates to a six-year-high of 5.75 percent last week. High interest rates can limit inflation, but also tend to bolster currencies.

The euro was introduced to the currency markets in 1999 and promptly weakened to an all-time low of $0.86 in 2001. Since then, the currency has been a European success story and has continually strengthened against the dollar.