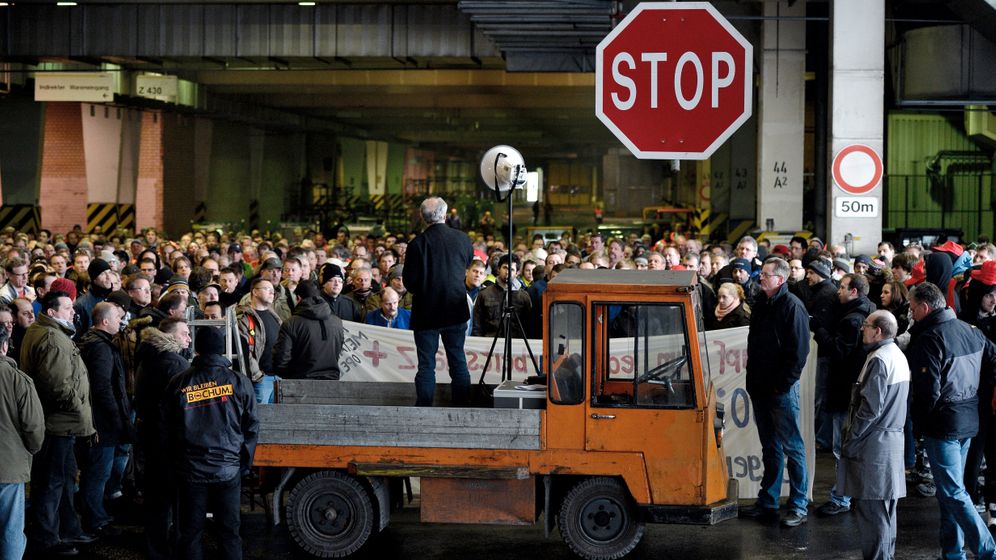 The word "blood" is often mentioned in connection with the crisis in the European automobile industry, a sector that accounts for about 12 million jobs.

Fiat CEO Sergio Marchionne, for example, complains that German carmaker Volkswagen is creating "a bloodbath" among its competitors with discounts. And French Minister of Industrial Renewal Arnaud Montebourg announced that France will fight "to the last drop of blood" for its industrial sites.

In fact, most European automakers are seriously wounded. In 2012, car sales in Europe reached their lowest level in 17 years. Sales have declined by 25 percent since 2007 alone, and there is no improvement in sight.

Mass-market carmakers Opel, Ford, Renault, Peugeot and Fiat are running at a loss in Europe, with their plants often operating only at half capacity. Ford is closing two auto plants in Great Britain and one in Belgium. Peugeot plans to shut down its plant near Paris and Opel is closing a production facility in the western German city of Bochum.

So far, so bad. But from the standpoint of the affected companies, what makes their decline doubly vexing is the fact that some companies are actually doing well.

At the top of the list are the German competitors : the VW Group, BMW and Daimler. Together, they are selling more cars than ever before, despite the weak European market. And then there is Korean carmaker Hyundai, which is coming at the French and Italians from the outside.

The automobile industry remains a growth sector worldwide, despite the economic crisis in the southern European countries, as well as the loss of interest in cars among many Europeans, for whom a motor vehicle is no longer a status symbol but a means a transport that can also be rented on an as-needed basis.

Demand is growing in China, India, Russia, Brazil and many other markets outside Europe. About 70 million vehicles were sold worldwide last year, and sales are expected to increase to 90 million by 2020.

The German and Korean manufacturers are benefiting from this development. They have had a presence in these growth markets for some time. In most cases, this involves more than just a distribution network to sell imported vehicles, but also having their own production facilities.

The gap between the winners and losers continues to widen, creating a divided Europe in the automobile industry. Some companies are raking in billions, while others suffer losses that threaten to drive them out of business. And when a European politician and a CEO mention blood in this situation, nationalism is never far away.

French Industry Minister Montebourg claimed that workers at Hyundai and its sister brand Kia are striking in Korea against a 12-hour day. The French, he said, would be "participating in a form of social cruelty by buying Hyundais or Kias."

The French government even called upon the European Commission to monitor auto imports from Korea. According to Montebourg, imports have risen sharply since a free-trade agreement reduced customs duties.

The French move is nothing more than a diversionary tactic, because only 12 percent of the cars Hyundai sells in Europe are from Korean factories. Hyundai already produces more than half of its vehicles at its plant in the Czech Republic. Clearly tariffs are hardly going to deter the Korean competitor.

The Koreans' success is not based on unfair competition, but on a simple recipe: They build good cars at affordable prices. A five-year warranty at Hyundai and a seven-year warranty at Kia help dismantle preconceptions about poor quality among the Korean automakers.

Peugeot, Fiat and Opel lack the right models. Even worse, for years the management of these companies neglected to globalize their brands.

They can hardly make up for lost time in the midst of an economic crisis. Building a distribution network in China, for example, takes years and costs several hundred million euros. But high losses are instead forcing the companies to curtail their investments. As a result, the companies that are in crisis can do nothing more than try to slow their decline.

Under these circumstances, it is almost understandable that they are attacking their successful competitors. In addition to Hyundai, VW is a prime target for attacks from France and Italy. The French weekly news magazine L'Express printed the headline "VW über alles," an allusion to the opening words of the German national anthem that were used under the Nazis.

"This worries me," says VW CEO Martin Winterkorn in a SPIEGEL interview. Volkswagen hopes to be the world's largest automaker by 2018. While competitors close plants, VW is opening new ones in China, Russia and Mexico. The New York Times recently praised the German company for its thriving US business.

VW still has plans to establish a low-cost brand to produce basic cars for developing countries. And if competitor Fiat slides even further into crisis, Wolfsburg-based VW would even be interested in acquiring its subsidiary Alfa Romeo, to the chagrin of Fiat CEO Marchionne, who has repeatedly said: "Alfa Romeo is not for sale." He would love to see a merger between Fiat and Peugeot or Opel to combat Volkswagen, but neither company is interested.

Nevertheless, VW can't be indifferent to the resentment that is being stirred up in France and Italy. It could harm the company's image and thus put a dent in car sales. "The worst thing that can happen to someone who is successful is that he is hated," says VW CEO Winterkorn. He doesn't want his company to acquire a reputation for mowing down the competition.

Winterkorn is taking a friendlier approach instead. For instance, when VW executive Karl-Thomas Neumann was hired as Opel's new CEO, Winterkorn allowed him to withdraw from his contract prematurely.

As a result, Opel doesn't have to wait until the end of June for its new chief executive to assume office. VW also declined to file a complaint with the European Union when the French government granted Peugeot's in-house bank more than €7 billion ($9.4 billion) in loan guarantees. The German automaker could have denounced the move as a case of illegitimate government assistance.

Even VW Group Supervisory Board Chairman Ferdinand Piëch is taking a reserved approach. When he was asked to comment on Fiat CEO Marchionne's predictions of a bloodbath in the European automobile market, Piëch merely said: "It won't be bloody for us."