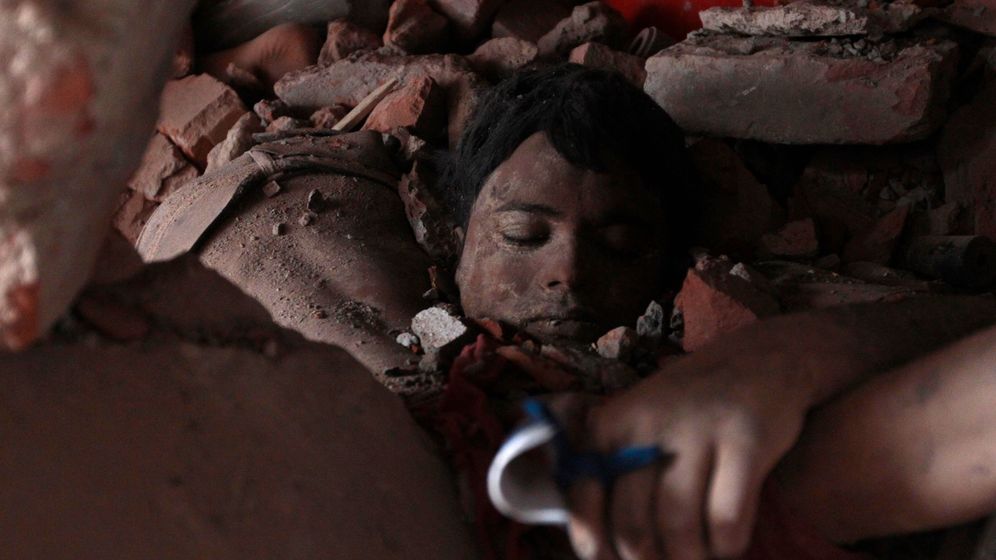 Photo Gallery: Sifting through the Rubble in Dhaka

Jamil can't stop thinking about the voices that came from the building: a mixture of pleading, praying, screaming and whimpering that rose from the mountain of ruins. "We heard people calling for help. We heard them begging for water and reciting prayers," the fireman recalls. "But we couldn't do anything for them. So many of them were simply beyond our reach." They helped those they could, bringing food and water to people trapped in accessible cavities within the giant mound of rubble that days before was still a functioning factory building.

The disaster, in which several thousand people were buried alive in the collapsed Rana Plaza building in Savar, a suburb of the Bangladeshi capital of Dhaka, created sights and sounds that many will find hard to forget. Rezaul, for example, vividly remembers a woman with disheveled hair and a blood-encrusted face whose right leg was pinned down by a concrete pillar. "She begged me to saw off her leg and free her," he says. "I just happened to be there."

Rezaul works as a trash collector. When he heard about the disaster, he dropped his bicycle and trash bag, and ran to the site. "But I can't cut a person's leg off," he says. So he left the woman, and went in search of help -- in vain.

At least 3,000 people are believed to have been in the building on Rana Plaza at the time the building collapsed. More than 380 bodies had been recovered by Monday morning. Hundreds are still missing. And with every day that passes, the chances of finding survivors grows dimmer.

A Disaster of Historical Proportions

The deadly incident in Savar has already been called the worst industrial accident in the country's history. It serves as a reminder that nothing has changed when it comes to the inhumane conditions under which clothes are made in Bangladesh for European and American textile companies and clothing chains. And the same can be said about the culture of corruption that is rampant in Bangladesh, the abundance of illegally procured construction permits and the lax attitude factory owners take toward safety standards.

Workers had noticed deep cracks in the building's walls on Tuesday, the day before it caved in. They warned the police, the regulatory authorities and the Exporters Association of Bangladesh. It was common knowledge that the owner had three extra stories added to the previously five-story building without a permit. A ninth floor was under construction when the disaster occurred.

The building housed five garment factories as well as the offices of Brac Bank. The bank manager decided to close the branch on Wednesday because of safety concerns, thus saving his 11 employees' lives. "The branch manager called to say he thought it was too dangerous to go into the building," recalls spokesman Zeeshan Kingshuk Huq. However the operators of the garment factories ordered their workers -- mostly women -- to work their sewing machines as usual.

The subsequent disaster must have been like déjà vu for the people of Savar. In 2005 the town's Spectrum Sweater building collapsed, killing 64 people. That building too had illegally been raised from four floors to nine. And there too, factory workers produced goods sold by German retailers ranging from KarstadtQuelle to Steilmann.

Then as now, the owner of the building had friends in high places: Sayed Shahriyar's father-in-law had a seat in parliament. His wife was a high-court judge. Shahriyar therefore didn't spend long in prison before getting released again.

Mohammed Sohel Rana, the owner of the Rana Plaza building, went into hiding immediately after the disaster. "Wherever he may be, we will find him and bring him to justice," Prime Minister Sheikh Hasina promised last week. Police arrested Rana on the Indian border over the weekend. Rana is also thought to have good political connections. He's a member of the governing Awami League, and said to be extremely wealthy. He apparently owns two more buildings in Savar, as well as land.

The Complicity of European Companies

According to the Dhaka's Daily Star newspaper, 30-year-old Rana used his connections to obtain the land on which the Rana Plaza stands. The mayor issued the building permit himself, although he isn't officially allowed to, the article contends. Such backroom deals are common -- a well-known combination of corruption, irresponsibility and sloppiness that so often ends in tragedy. Except that in this case, it was encouraged by every European company that buys cheap T-shirts -- and therefore the disaster hits closer to home for Western consumers than they would like.

Rana had little cause to fear a crackdown by state authorities. After all, there are only 18 inspectors for the entire greater Dhaka region, which has thousands of garment factories. Worse still, according to a report by Human Rights Watch, factories are warned in advance about impending inspections.

As late as Tuesday evening, Rana claimed in a televised interview that structural engineers had checked the cracks in the walls and decided the plaster was merely crumbling. This was what prompted the operators of the garment factories to threaten to fire anyone who didn't turn up for work, say those connected with the incident.

Factories in Bangladesh have been under enormous pressure for weeks from their foreign customers because, until recently, strikes and protests had been disrupting much of the public sector. The political turmoil brought parts of the Bangladeshi economy, the world's second-largest textile exporter after China, to a complete standstill. Trucks loaded with goods destined for Europe and the US were stuck at the port of Chittagong, and many buyers started avoiding Bangladesh altogether. Others, like the British supermarket chain Tesco, publicly considered shifting production to Turkey or even Africa.

'Murder in the Name of Profit'

The Bangladeshi garment industry employs some 4 million people and generates almost 80 percent of the country's export revenues. Threats by customers are therefore not taken lightly. As a result, manufacturers were understandably desperate to make up for lost time. Roy Ramesch Chandra, the head of a trade union in Dhaka, calls the disaster "murder in the name of profit." He says, "Bangladeshi workers had to pay with their lives so that foreign consumers could buy cheap clothes."

The five garment factories operating in Rana Plaza also produced textiles for German retailers. One of these is Phantom Apparels Ltd, which supplied the German discount clothing chain NKD with T-shirts and blouses until 2012. Checks repeatedly uncovered problems with safety, as an NKD spokesman readily admits: Emergency exits were missing, insurance was inadequate or non-existent, maximum working hours were being exceeded. In 2012, NKD severed its ties with Phantom Apparels -- though not because of the poor working conditions or safety concerns, but "due to quality problems."

Another company that now lies buried in the rubble is Ether Tex, a low-cost manufacturer that produced clothing for the German market, including the discount chain Kik and a C&A importer. Until 2010, its customers included the Güldenpfennig company based in Quakenbrück, Germany, which has in the past supplied discount supermarket chain Aldi and the Otto mail-order firm.

Irish textile discount chain Primark also bought clothing from the Rana complex. The rising low-cost brand likes to suggest to its customers that its prices are so low they could afford to wear its clothes just once. At the opening of a store in Frankfurt, 70-year-old Primark Director Breege O'Donoghue proudly told reporters, "Look at me: Everything I'm wearing costs a total of 57 euros. It's all from Primark. Including what you can't see."

Primark's Web site even has a section on ethical trading. The company's suppliers, says the website, are held to the following code of conduct: "A safe and hygienic working environment shall be provided. Adequate steps shall be taken to prevent accidents (...) by minimizing, so far as is reasonably practicable, the causes of hazards inherent in the working environment." This is clearly intended to mollify customers.

Gisela Burckhardt of the Clean Clothes Campaign considers such claims to be hypocritical. Together with trade unions in Dhaka, she has just finished drawing up a fire-protection and building safety agreement. The experience has shown her how difficult it is to commit companies to even the most basic of safety standards. "We took it to H&M, C&A and Kik, unfortunately without any success," she says. So far, the agreement has been signed only by US company PVH, which owns the Calvin Klein and Tommy Hilfiger brands, although Tchibo has also indicated its willingness to take part.

Burckhardt says the clothing industry can only be improved sustainably if it pays decent wages and introduces a new kind of regulation involving independent, unannounced inspections of factories funded jointly by suppliers, contractors and trade unions. She also wants companies in Germany to be held accountable. "If German managers are made responsible for human rights abuses in their supply chain, it won't take them long to come to their senses," she says.

Back in Savar, the search for the missing and the dead continues at temperatures of around 35 degrees Celsius (95 degrees Fahrenheit) and amid an ever greater stench of decomposing flesh. Bodies pulled from the rubble are taken to a schoolyard for identification. People carrying pictures of their missing loved ones wander around dazed and angry. The photos depict mothers, fathers, sisters, brothers, daughters and sons.

Together the crowd forms a multicolored pack of mourners that dares not leave the site of the disaster. Were it not for the look of anguish on their faces, the scene might almost resemble a Benetton ad.

10 Bilder Photo Gallery: Sifting through the Rubble in Dhaka 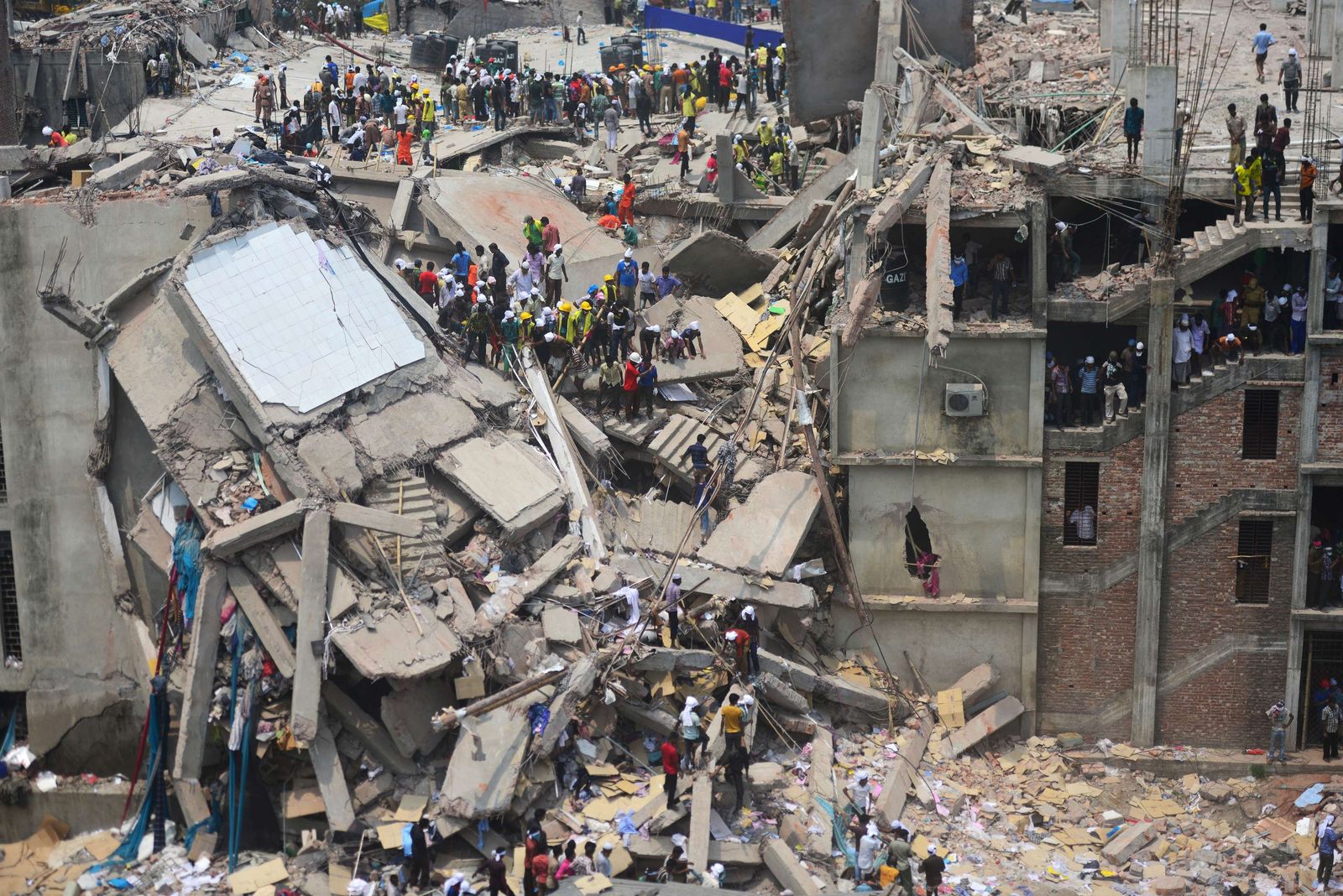 Bangladeshi volunteers and rescue workers attempt to pull survivors from the rubble. At least 3,000 people are believed to have been in the building on Rana Plaza at the time the building collapsed. Several German and European firms were supplied by factories within the complex.