After the fall of the Berlin Wall, Japan's Sumitomo Electric Industries joined a crowd of automotive suppliers setting up low-cost plants on Europe's eastern rim. It opened factories from Poland to Bulgaria and today has a dozen facilities in the region. But now, Sumitomo is shifting production south of Europe-to the ancient Moroccan port of Tangier and to Bou Salem, a market town set among wheat fields in northern Tunisia. As costs rise in Eastern Europe, the company says, it's getting harder to make a profit. North Africa, by contrast, offers far lower wages and plenty of eager workers. 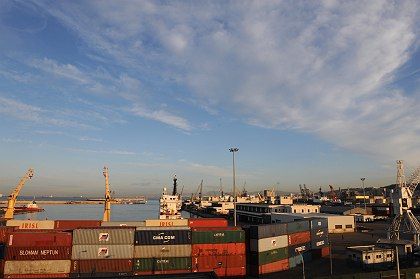 The main port of Algiers.

Sumitomo isn't the only company beating a path to the Maghreb, a swath of four developing countries along the Mediterranean's southern shore. Led by Morocco and Tunisia, the region of 84 million people is attracting serious investment-more than $30 billion over the past five years-to build everything from auto and aerospace factories to five-star resorts and call centers for multinationals.

Even Algeria and Libya, long shunned on the international stage, are starting to revive their stagnant economies. Both are opening up to foreign investment and, with pipelines under the Mediterranean, have become important suppliers of natural gas to Europe as it seeks alternatives to politically unstable Russia. The Maghreb countries all "have very different politics, but they're on track, moving in the same direction," says André Azoulay, a former French bank executive who is an economic adviser to Morocco's King Mohammed VI.

The Maghreb-"place of the sunset" in Arabic-is likely to keep expanding in spite of the global economic turmoil. Growth forecasts for 2009 range from 3.7 percent in Tunisia to more than 5 percent in Libya. Euler Hermes, a consultancy that analyzes investment risk, now rates Tunisia and Morocco as safer than Hungary, Romania, and Bulgaria. "While the (Maghreb countries) will certainly be adversely affected by the downturn, they are robust enough to survive," says Euler Hermes analyst Andrew Atkinson.

The Maghreb's appeal is obvious. It's in the Continent's backyard: Tangier lies just eight miles from Spain across the Strait of Gibraltar. The region's governments are relatively stable and business-friendly. And it's cheap, with factory wages averaging $195 to $325 a month. Compare that with the average $671 monthly paid by French automaker Renault at its Dacia Logan factory in Romania.

Those numbers help explain why Renault is building an assembly plant in Tangier that will be one of its biggest anywhere. The factory is expected to employ 6,000 workers, and Moroccan officials say it could attract suppliers that would provide jobs for 35,000 more. Although the global crisis has delayed the plant's inauguration by as much as a year, Chief Executive Carlos Ghosn says Renault remains committed to the venture, which will build low-cost Logan cars for the Maghreb and beyond. "We are optimistic about these markets," he says.

Europe's aerospace industry is just as bullish on the region. Next year, Airbus plans to open a $76 million factory in Tunisia with 1,500 workers. And the industry's suppliers already employ more than 10,000 in the Maghreb, making fuselage panels, high-pressure pipes, and much more. France's Groupe Safran, for instance, has six facilities in the Maghreb employing almost 1,400 people. Inside its airy, brightly lit factory near the Casablanca airport, women in white jackets painstakingly weave electric wires into cables destined for Boeing and Airbus jets. The joint venture with Boeing and Morocco's flag carrier Royal Air Maroc employs 600 people earning an average of $315 a month. The workweek is 44 hours, considerably longer than in most of Europe. And with no unions, it's easier for managers to match production with orders by getting employees to work overtime. "We are competitive not only on salary but on flexibility and responsiveness," says Hamid El-Andaloussi, the head of Safran's Moroccan operations.

Casablanca is emblematic of the Maghreb's vigor. Far from the seedy, lawless outpost depicted in the Humphrey Bogart film that made it infamous, Casablanca is a bustling city of 4 million. Office towers overlook the walled Old Medina, an ancient district of narrow, winding streets. On the outskirts, workers are putting the finishing touches on a vast complex of office buildings called Casanearshore. It will house call centers and back-office operations for tenants such as Dell and Paris-based bank BNP Paribas that are eager to tap the French language skills in the former French colony.

Head of the Class

Another attraction for multinationals: skilled labor, thanks to a focus on schooling in Morocco and Tunisia. The World Economic Forum ranks the quality of math and science education in Tunisia 7th in the world (the US is 48th). Morocco has even opened an American-style university in the Atlas Mountains, where all courses are taught in English and students are expected to spend at least one semester abroad.

Such investments create opportunities for the Maghreb's young people. "I'm living my passion," says Elmehdi Daou El Makane, a self-described video game addict who works for French games group Ubisoft Entertainment at a design studio in Casablanca. One of 85 employees at the studio, he happily spends his days developing games such as Rayman Raving Rabbids for Nintendo consoles.

Yet drive a few miles from Casablanca, and the picture changes rapidly, to dusty villages and donkey carts and then, finally, the Sahara, which covers more than three-fourths of the Maghreb. The region is far less developed than Eastern Europe was when the Wall fell. Morocco, the Maghreb's poorest country, has gross domestic product per capita of only $4,000-compared with $13,200 in Bulgaria, the European Union's poorest member-and a literacy rate of only 52 percent, vs. more than 98 percent in Bulgaria.

Morocco's 45-year-old king and Tunisia's long-ruling leader, Zine El Abidine Ben Ali, have privatized companies and loosened labor regulations, but the reforms are far from complete. "There is corruption, nepotism, petty jealousy," says Kathy Kriger, a former U.S. diplomat in Morocco who runs a Casablanca restaurant, Rick's Café, modeled after the bar in the classic film. And while Libya and Algeria have made great strides-majors such as BP, Royal Dutch Shell, and ExxonMobil have invested there-they have even further to go.

Despite such uncertainties, the Maghreb looks relatively well positioned to ride out the economic storm. Unlike Eastern Europe, it didn't gorge on foreign debt. And while the U.N. says overseas investment in the Maghreb dropped by some 5 percent last year, that's not bad compared with the 21 percent decline in the Middle East. "We are seeing some projects delayed or scaled back," says James Morrow, Citigroup's chief for Morocco, Tunisia, and Libya. But, Morrow says, "it's the next logical location for companies that want to diversify their exposure."