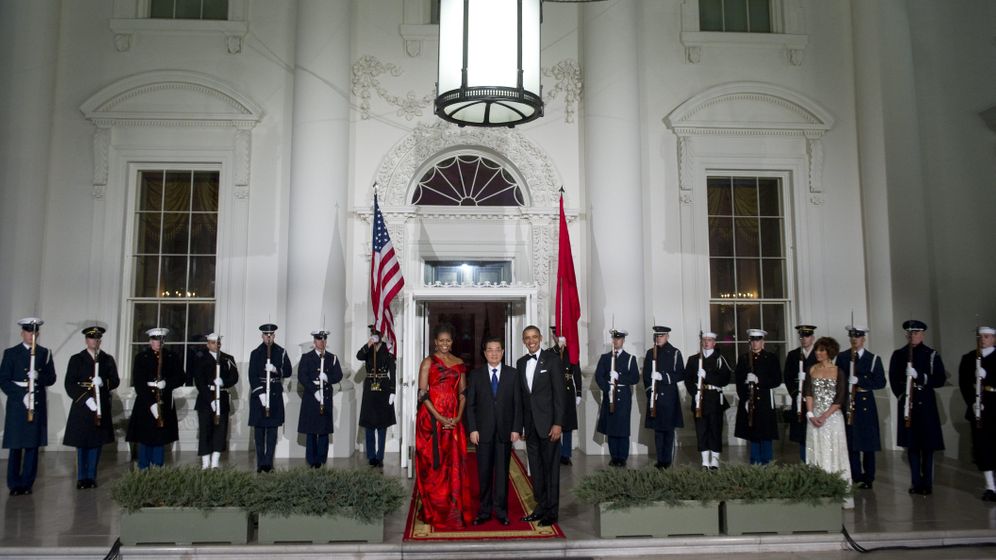 Photo Gallery: Transforming the Yuan into an International Currency

They have made it to the heart of American capitalism. As of last week, the pioneers in China's race to the top have been displayed on a giant electronic billboard in New York's Times Square. For four weeks, the images of Chinese astronauts and athletes, their stars and the super-rich will appear 300 times a day in a giant advertisement for the People's Republic.

The occasion for the new superpower's confident campaign was the state visit of President Hu Jintao, 68, with US President Barack Obama. Even before he left Beijing, the visiting head of state had predicted that the dominant capitalist power could expect to see a redistribution of global power. In written interviews with the Wall Street Journal and the Washington Post, the Chinese leader said that the world's monetary system, with the US dollar as its reserve currency, was a "product of the past."

China's long-term goal is to become a country with an anchor currency. If that happens, other countries will have to maintain reserves of the yuan instead of the current reserve currencies, the dollar and the euro. China could then use its own currency to conduct transactions, gaining more favorable terms as a result, in its global shopping spree, such as in the commodities markets.

Years ago, Hu and the Politburo attended secret lectures in which Chinese professors explained the history of the rise and fall of major powers. During these sessions, the Chinese leaders realized that no modern country has ever become a superpower without a reserve currency.

China has a lot on its plate. Today the renminbi -- the official name in China for the "people's money," which is adorned with a portrait of Mao -- cannot even be freely exchanged into another currency. To keep the prices of its exports artificially low, the country also essentially links the exchange rate of its currency to the dollar. Until now, Beijing has used a complicated system of foreign currency controls to effectively shield the renminbi from global capital flows.

In order to have a reserve currency, China would have to give up all of this. It would have to gradually appreciate its currency, perhaps even allowing it to float freely, so that the exchange rate could be based on the real value of the currency and the strength of China's economy. This would make the country's exports substantially more expensive and would drastically curb growth.

Nevertheless, hardly a week goes by in which China does not launch new pilot projects to "internationalize" the yuan in the long term.

As of January, private citizens in the eastern Chinese industrial city of Wenzhou have been permitted to invest up to $200 million (€148 million) abroad. Wenzhou is the traditional cradle of private entrepreneurship in the People's Republic.

In the past, many Chinese business tycoons moved their money abroad illegally, but now Zhou Xiaoping, a foreign trade official in Wenzhou, is being inundated with inquiries from wealthy Chinese. He promises them entirely new freedoms, as long as they do not use their money to speculate in real estate or stocks. "It's better to channel the flow of money," says Zhou, "than just to block it."

That would be a big change. The Chinese media reported this week, however, that authorities in Beijing have not yet given final approval to the Wenzhou scheme.

In December, the central bank issued permits to 67,400 export firms throughout the country to do business abroad in yuan. Previously, only 365 companies had that privilege.

China is also experimenting with the yuan as a form of payment abroad. In Moscow, the Chinese ambassador recently attended a ceremony to launch trading of the yuan against the rubel in Russia's interbank currency exchange. Still, that trading will be restricted to one hour daily. In January, the New York branch of the Bank of China began offering American customers monetary transactions in yuan for the first time.

China has also reached agreements with South Korea and other neighbors, as well as with Iceland, Belarus and Argentina, to engage in complex financial transactions known as currency swaps. The deals are designed to allow the central banks of these countries to make the yuan available to domestic companies.

However, China's real testing ground for the internationalization of the yuan appears to be Hong Kong. As of September 2009, a handful of companies in the so-called Special Administrative Region (SAR) have been permitted to conduct trading operations in renminbi. Foreign corporations, including the US fast-food restaurant chain McDonald's, have already issued bonds denominated in yuan in the SAR to fund their expansion on the mainland.

The volume of trade conducted in Hong Kong in the local currency grew to 340 billion yuan between June and November 2010. The amount is miniscule in comparison with the total trade volume of the world's second-largest industrialized country, but, given the hole in the system of foreign currency controls, it is still large enough to worry the more cautious members of the Chinese leadership.

They are alarmed that foreign and domestic speculators are circumventing China's capital controls and stocking up on yuan in Hong Kong, where they can exchange the Chinese currency for dollars at more attractive rates than on the mainland. Hong Kong's currency watchdogs recently warned the banks, apparently at Beijing's urging, to scrutinize their customers more carefully.

China is in a predicament. On the one hand, Hu and his fellow comrades are reveling in their new role as the leaders of a superpower, a role that enables them to play down the importance of the dollar. This appeals to their patriotic countrymen, but even dollar critic Hu concedes that "a fairly long process" is needed before the yuan can rise to the level of a global currency.

This is because the Chinese cannot offer an alternative to the dollar. To keep its currency artificially low, the central bank sweeps together foreign currency in the domestic banking system, as if it were wielding a giant broom. In this way, China increased its foreign currency reserves last year by $450 billion to $2.85 trillion (€330 million to €2.08 billion). Beijing invests a large portion of the funds in American treasury bonds, thus financing the debt management policy of the still dominant Western superpower.

China's vision is clear. Two years ago, at the height of the global financial crisis, the government ceremoniously announced that it intends to make Shanghai into a global financial center by 2020. But Shanghai can only become an Asian Wall Street if it develops into a modern financial market, says Chen Wei of the Academy of Social Sciences in Shanghai.

The city is a long way from that goal, especially with the government still in control of market activities. "The more the government gets involved, the greater the risks for investors," says Chen.

China's real financial center is Beijing. The state-owned banks, led by the Industrial and Commercial Bank of China (ICBC), have their headquarters in the capital. When ranked using market capitalization, the ICBC is the largest bank in the world.

China's banking giants have divided up the market amongst themselves. Instead of competing for the confidence of private investors, they issue loans practically at the behest of the party. ICBC Chief Executive Jiang Jianqing was named party secretary and head of the bank in 2000. He is an alternate member of the party's Central Committee, as are his counterparts at the three other major banks. They owe their jobs to the party's organization division, a group that is clouded in secrecy and is not listed in the Beijing telephone book.

A Product of the Past?

Last year alone, the state-owned banks issued loans worth about 8 trillion yuan (about €900 billion), and in doing so fueled the massive real estate bubble. If the yuan were freely convertible, China could become a target for speculators, like the Asian Tiger countries were during the 1997 Asian financial crisis, warns Xiang Songzuo of Renmin University in Beijing.

Xiang believes that China needs about another 15 years to turn the yuan into a freely convertible currency. Then he lists all the reforms China still has on its agenda: the transformation of its low-wage industries; stimulation of domestic consumption; and the creation of a transparent and fair financial system. In short, China will have to transform itself from a system of state capitalism, in which the party pulls the strings, into a market economy.

Only then, says Xiang, will the rest of the world accept the yuan as the reserve currency. But is the party ultimately willing to limit its omnipotent control over China's economy? Or, to do so, would it have to become a "product of the past" itself?

3 Bilder Photo Gallery: Transforming the Yuan into an International Currency 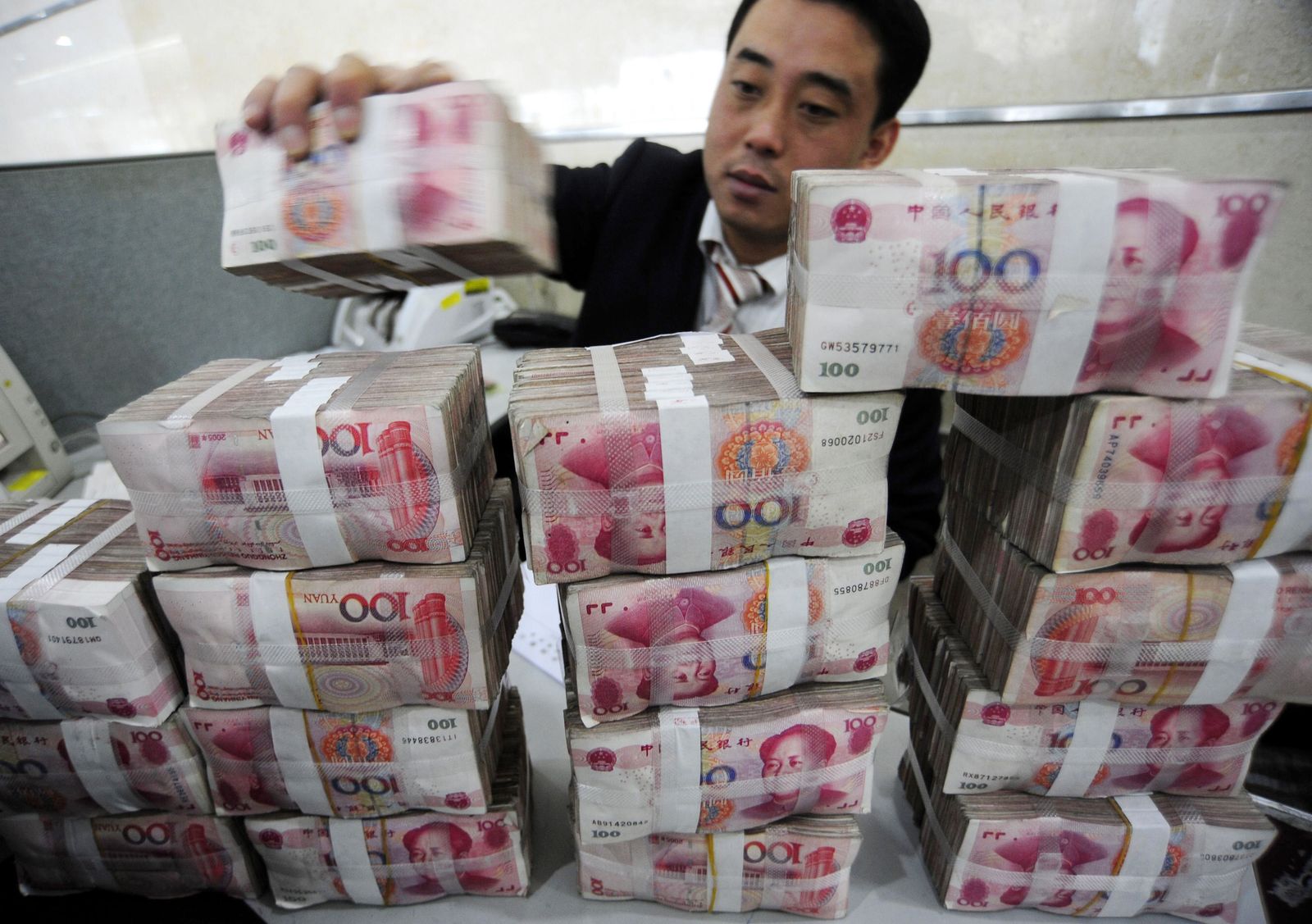 China's long-term goal is to become a country with an anchor currency. If that happens, other countries will have to maintain reserves of the yuan instead of the current reserve currencies, the dollar and the euro. China could then use its own currency to conduct transactions, gaining more favorable terms as a result, in its global shopping spree, such as in the commodities markets.