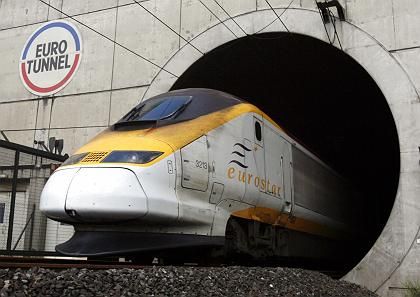 Upgrades to the Eurostar train, which runs between London and Paris, were one boon for Europe's high-speed rail network last year.

Europe's high-speed rail operators had a banner year in 2007. In June, France's SNCF rail system opened a new line that dramatically cuts travel times from Paris to eastern France, while other high-speed links neared completion in Spain, Belgium, and the Netherlands.

Meanwhile, the SNCF-operated Eurostar service, which links Britain with the Continent, opened a refurbished terminal at London's St. Pancras station in November, after completing a track upgrade that cuts travel time between London and Paris to only 2 hours and 15 minutes.

Underscoring the good news, Eurostar reported on Jan. 9 that it carried a record 8.26 million passengers last year, with revenues up a healthy 15.4 percent to $1.18 billion. But Guillaume Pépy, the SNCF chief executive who also serves as Eurostar's chairman, says that railroad passengers can expect even better news over the next few years.

The biggest breakthrough still to come: Easier pan-European travel. Despite the popularity of Europe's fast trains, making connections across national borders remains surprisingly complicated. For example, passengers on France's Trains à Grande Vitesse, or TGVs, can't easily make reservations for connecting high-speed trains in neighboring Germany or take a TGV from, say, the southern French city of Montpellier to Barcelona in northern Spain. But now, Pépy says, "The idea of a European network of high-speed rail is at last being realized. It will be a real alternative to air travel."

Last July seven operators banded together to form Railteam, an alliance that is working to create a seamless, high-speed network across a large swath of Western Europe. Functioning much like an airline alliance, Railteam is setting up a common reservation system that's set to begin operations in 2009. It is also helping member railways coordinate their schedules to reduce layover times. A frequent-traveler program will even be offered -- another page from the airlines' playbook.

For now, Railteam does not include operators in Italy, Spain, Portugal or Central Europe, where high-speed rail is less developed. But that could change in the next few years. Spain is set to complete a high-speed, Madrid-to-Barcelona link in 2009. And Pépy predicts that within 15 years it will be possible to travel by high-speed train all the way from Paris to Bratislava, Slovakia.

If railroads don't team up on their own, the European Union could force it on them instead. Last fall, lawmakers approved legislation that will require national rail networks to open their tracks to operators from other countries by 2010. Eventually, that might lead to SNCF trains serving German cities or Deutsche Bahn trains criss-crossing Bénélux.

Could European airlines such as Air France-KLM, Lufthansa or Ryanair lose business as high-speed rail service expands? After all, the Eurostar now carries more than 70 percent of passenger traffic between London and Paris. And air service between Paris and Brussels has ended altogether now that trains connect those cities in 1 hour and 20 minutes.

But there's still plenty of room for air travel in Europe. Even on trains going 300 kilometers an hour (186 mph), it takes at least 6 hours to get from London to the French Mediterranean, and even longer to vacation spots in Italy and the Iberian Peninsula. "The train and the plane are complementary," Pépy says.

On the other hand, trains are more energy-efficient -- a powerful draw in an era of growing carbon consciousness. And thanks to burdensome security checks and other hassles of air travel, trains are becoming an increasingly attractive alternative for business travelers between some major cities.

No question, that's a lucrative business for some operators: Eurostar, for example, charges as much as $866 for a roundtrip, first-class ticket between London and Paris, though discount coach tickets are sometimes available for prices as low as about $120 roundtrip. With such good money to be made, alliances by the SNCF and other national operators with next-door rivals could be just the first step to invading each other's home turf.