It's a gigantic plan -- huge wind turbines are to be planted offshore along the German coast with blades boasting a diameter bigger than the width of a soccer pitch. The transport ministry says a total of 2,500 turbines have been approved or are in the process of being approved in projects that the government says will create 30,000 jobs in northern Germany. Many millions of euros in taxpayers' money and corporate investments have already been pumped into expanding ports, business parks and infrastructure.

The plan is that these turbines will one day generate 12,000 megawatts, enough electricity for 12 million households. It would take 12 medium-sized nuclear power stations to produce the same amount of electricity -- and that's where the problem lies. Each individual giant wind turbine could cost around €10 million because installing it and maintaining it at sea is extremely expensive.

Such projects can only be afforded by large corporations capable of investing hundreds of millions of euros, and the only viable players are the big German energy companies that also run nuclear power stations: E.on, RWE, Vattenfall and EnBW. Those companies are believed to have reserved two thirds of the planned coastal zones earmarked for wind power generation.

So far little can be seen of this offshore investment drive apart from the Alpha Ventus test wind farm run by E.on, Vattenfall and the Oldenburg-based power company EWE. And environmental groups and energy analysts suspect the various projects will grind to a halt if the new German government goes ahead with its plan to postpone the phase-out of nuclear power stations, originally scheduled to be completed by 2020.

Firms in No Hurry to Expand Capacity

"There's a conflict within the big companies," says Ulf Gerder of the German Wind Energy Association. The firms are relying on a mix of new coal-fired power stations and longer running times for nuclear power in addition to renewable energy. But if they proceed to quickly with their offshore projects, they will generate so much added capacity that they may inadvertently drive down the price of electricity.

Gerder says the lack of progress in building the necessary infrastructure shows that the power companies aren't in any hurry. There aren't enough power cables in place to transmit all the electricity that will be generated by the wind farms. Germany's new law on renewable energies says wind power takes precedence -- but the fewer power lines there are, the more scope companies will have to produce conventional power, which earns them more money.

"They're not going to ruin their balance sheets if they don't have to," says Bärbel Höhn, deputy floor leader of the Green party. She suspects that as long as the nuclear power stations go on producing ample amounts of electricity, companies won't be in a hurry to proceed with expensive offshore projects. Höhn says the returns from offshore wind power amount to just 10 to 15 percent, which is a fifth of the profits generated by nuclear power.

Officials from the German environment ministry also sound concerned at the slow pace of investment. They say E.on and Vattenfall have made no major progress for some time on wind farm projects that have been approved.

'No Expansion in the Foreseeable Future"

If the energy giants were serious about the offshore drive they would be expanding power line capacities at the same time. "That isn't happening so far," says Gerder. It's different in the United Kingdom where RWE has a strong interest in building offshore wind farms so that it can get into the British energy market.

"In Germany, by contrast, the company would be competing against its own fossil power business if it were to proceed with strong investment drive in renewable energy," says Gerder.

Bärbel Höhn, an opponent of nuclear power, agrees. "If the nuclear reactor lifetimes are extended there won't be any significant expansion of offshore wind power in the foreseeable future," she says. That would make heavy investments already undertaken in port installations along the coast redundant. The ports of Bremerhaven, Emden, Cuxhaven, Rostock and Wismar have invested in new harbor installations and provided regional development funding in anticipation of a wind farm boom. If the offshore investments grind to a halt, the economically weak coastal regions of Germany won't get the thousands of new jobs they had been hoping for.

EnBW, RWE and Vattenfall deny accusations that they are dragging their feet. RWE Innogy said all its offshore wind energy projects were on schedule in terms of planning and construction. The company said it will continue investing €1 billion a year in renewable energies regardless of whether nuclear reactor lifetimes are extended or not. Old power stations will be taken out of service as new wind farms come on line, it said.

But until now, companies faced the prospect of switching off their nuclear plants as well. That's going to change with the new coalition being formed between Chancellor Angela Merkel's conservatives and the pro-business Free Democrats following the Sept. 27 election.

It looks as if the coalition will agree an unlimited extension of the nuclear reactor lifetimes, German news agency dpa reported on Monday, citing participants in the coalition talks. The coalition plans to develop a comprehensive energy plan which probably won't be completed until the new year, and which will impose strict safety standards on reactors, dpa reported.

Germany's power companies won't all benefit equally from longer nuclear lifetimes. E.on runs more modern reactors which could remain on line for a considerable time, while EnBW will probably have to invest heavily in two of its four plants to meet safety requirements, or shut them down as planned. Vattenfall's two plants, Brunsbüttel and Krümmel, are off line at the moment and are regarded as prone to technical problems. Stricter safety requirements could force them to be shut down for good.

As a result, two of the power companies will profit far less from the windfall of extra profits when nuclear lifetimes are extended, and will have more incentive to invest more in wind power.

In addition, companies may be forced to boost their investment in renewables in return for the longer nuclear lifetimes. The environment minister of the state of Baden-Württemberg, Tanja Gönner, wants to force companies to hand over at least 50 percent of the extra profits they will generate from keeping their nuclear plants open. "The lifetimes won't be extended free of charge," she said.

But it remains to be seen how much the power companies are prepared to pay. EnBW chief Hans-Peter Villis said two days after the election that he would pay an "obolus" for extended lifetimes. An obolus was an ancient Greek coin worth very little. 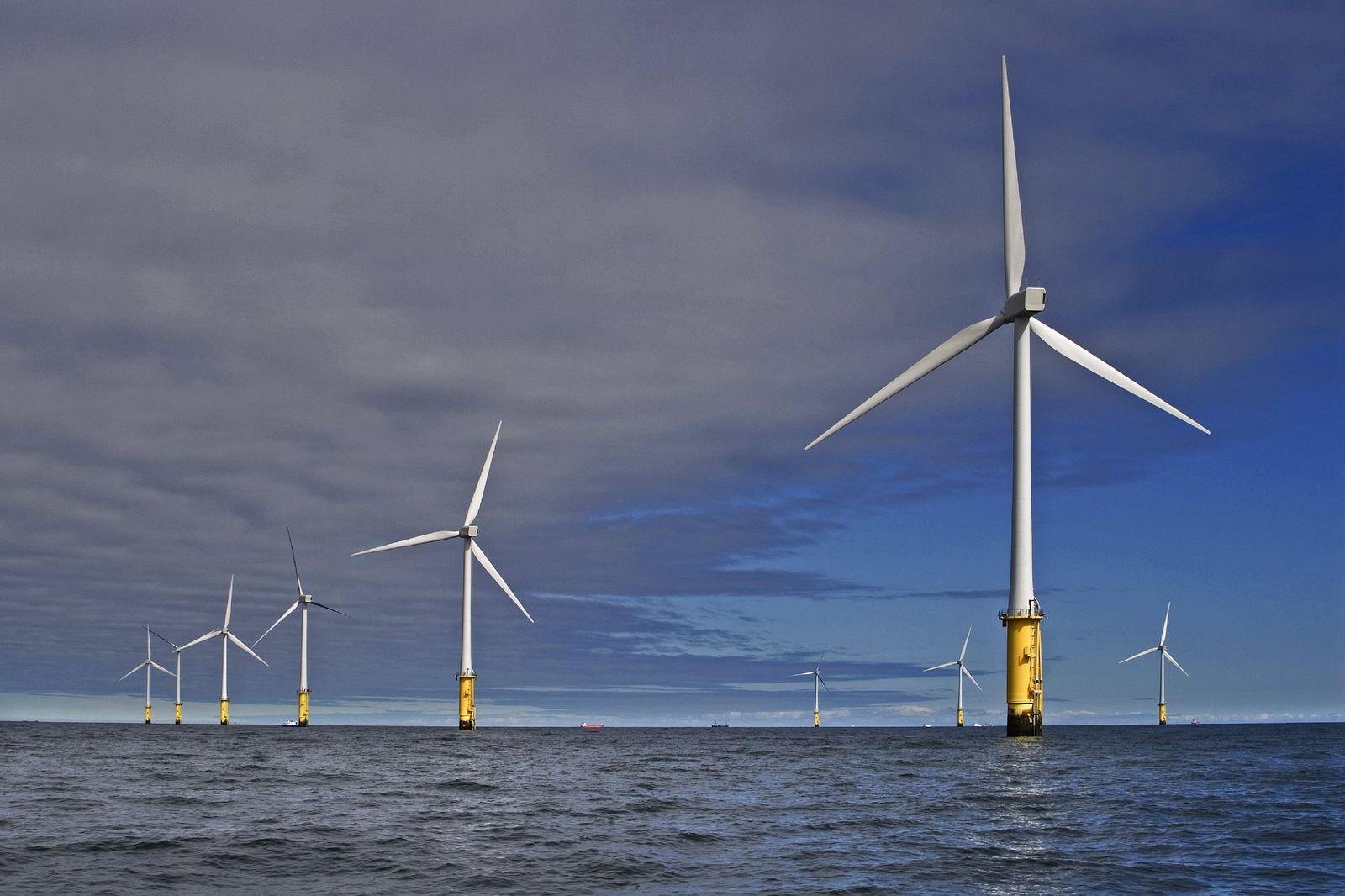 An offshore wind park operated by RWE Innogy off the coast of North Wales. Similar projects off the German coast are at risk, experts warn.