Aiming to prevent a financial calamity, the European Central Bank, the Bank of England and the Bank of Japan together pumped more than €111.7 billion ($159.3 billion) in quick tenders into the money markets on Tuesday, the institutions reported in Frankfurt, London and Tokyo. 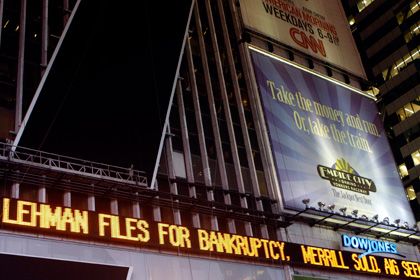 The ECB alone funnelled €70 billion to commercial banks on Tuesday. One day earlier, the ECB had already offered up €30 billion in order to prevent liquidity shortfalls. The efforts are aimed at preventing a credit freeze at some of the world's biggest banks.

The central banks are seeking to restore calm and order in financial markets, which have been reeling since US investment bank Lehman Brothers declared itself insolvent. On Tuesday, German stocks continued to fall for a second day. The blue chip Dax index fell by closing to 98.99 to 5,965.17, a 1.63 percent decline. Most of the country's leading banks saw significant slides in share prices. On Monday the Dax fell below the level of 6,000 for the first time in almost two years.

Banks aren't lending each other as much as usual because they are worried about new writedowns, and the central banks' fund injections are aimed at preventing liquidity shortages. The last time the European Central Bank resorted to this measure was after the terrorist attacks of Sept. 11, 2001.

After US investment bank Lehman Brothers filed for Chapter 11 bankruptcy protection on Monday, British Chancellor of the Exchequer Alistair Darling told the BBC: "Governments, central banks and regulators have made it clear that we will do everything we possibly can to maintain stability in the financial system." He said international cooperation is crucial to ensuring financial stability. "This is clearly a very difficult time," he added. "We need to take action internationally, and we are."

In total, a handful of European central banks on Monday pumped €36.3 billion into the markets. Because of a national holiday, the Bank of Japan waited until Tuesday to make its move. But on Tuesday, it sought to stabilize markets in light of the crisis in US banking.

In two steps on Tuesday, the bank pumped a total of 2.5 billion Yen (€16.5 billion) into money markets. Central Bank Governor Masaaki Shirakawa said his institution would also take additional steps necessary to stabilize markets. He said the Bank of Japan would follow the situation at the US banks and the effects of the crisis closely.

In Britain, the Bank of England also injected 20 billion pounds (€25.2 billion) into the market, four times Monday's total. The loans were carried out at the current 5 percent key interest rate. Demand also exceeded the amount on offer, with banks requesting 58.1 billion pounds, almost three times what the central bank had offered.