In these times of economic crisis, even such a measly sum as €1.30 ($1.66) can turn a supermarket cashier into a national hero -- and may ultimately cost a leading German politician his job. 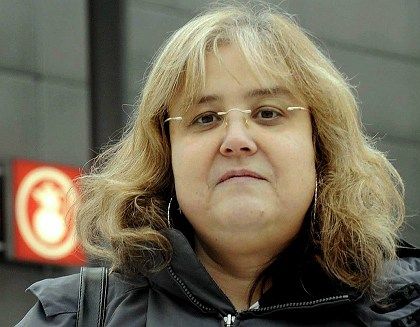 Barbara E. has turned into an unlikely national hero in Germany this week.

That, at least, appears to be the moral of checkout clerk Barbara E.'s story. The 50-year-old mother of three, who goes by Emmely, was fired from her job at Kaiser's a year ago for allegedly stealing bottle deposit slips worth no more than a handful of pocket change. On Tuesday, a state labor court in Berlin upheld the grocery chain's right to dismiss Emmely.

In the Thursday edition of the Berliner Zeitung, Wolfgang Thierse, a vice president of Germany's parliament, the Bundestag, blasted the ruling as "barbaric." He also said that such cases could "destroy people's confidence in democracy."

Now, Berlin's leading legal organization is calling on Thierse to resign. The parliamentarian's comments, they say, have called the independence of the judiciary into question.

Emmely's ascent to nationwide stardom has been dramatic. Even before Tuesday's court date, major papers across Germany carried long features telling her story. The mass-circulation tabloid Bild even put the veteran cashier, who has been working cash registers for 31 years, on its cover. The tone was clear: At a time when fat cats of the financial world have escaped relatively unscathed despite bringing the global economy to its knees, a common grocery store clerk loses her job for a few coins. Emmely quickly came to be seen as a martyr of class conflict.

Ms. E. began her career in East Germany and stayed on when the Kaiser's chain took over several supermarkets after Germany's reunification. On Jan. 12, 2008, two bottle deposit slips worth 48 euro cents and 82 euro cents were found in the store and turned in. The store accuses Emmely of having pocketed the slips before cashing them in while making purchases a few weeks later.

According to the cashier's lawyer, Kaiser's has offered up no proof that she is guilty; she was apparently turned in by a co-worker. Emmely herself suspects she was fired because of her union activity. She participated in strikes against Kaiser's in 2007 and says herself that she was never one to keep her mouth shut. "The strikes were the reason why they wanted to get rid of me," she said, according to the Süddeutsche Zeitung.

After losing an initial court battle in August, Emmely sued to get her job back a second time, a case that was heard on Tuesday. Hoards of supporters showed up and during court breaks, people rushed the plaintiff to shake her hand. In the week prior to the hearing, activists in Cologne even slapped stickers on bananas and radishes in a Kaiser's branch there reading "Solidarity with Emmely." In an economic climate where taxpayer-funded bank bailouts have become the norm, Emmely's case, it would seem, has struck a nerve. Unions, left-wing groups and politicians all expressed firm solidarity.

Nevertheless, the labor court upheld the August ruling in favor of Kaiser's, saying that a company has every right to fire an employee after "an irreparable breach of trust."

"This would have never happened to a high-paid manager," Bild Zeitung quoted a Confederation of German Trade Unions as saying in a statement.

Wolfgang Thierse isn't the only German politician who has voiced his discomfort with the court ruling. On Wednesday, Horst Seehofer, governor of the German state of Bavaria and a close political ally of Chancellor Angela Merkel, said "I don't understand how a cashier can be fired because of €1.30 while managers who lose billions can keep their jobs."

Kaiser's answer came promptly. "We were good employers for Ms. E for 31 years," head of Kaiser's Tobias Tuchlenski told Bild Zeitung on Wednesday. "I can't understand why she stole from us. We have 5,000 employees in Berlin. Imagine what would happen if all of them stole €1.30 every day?"