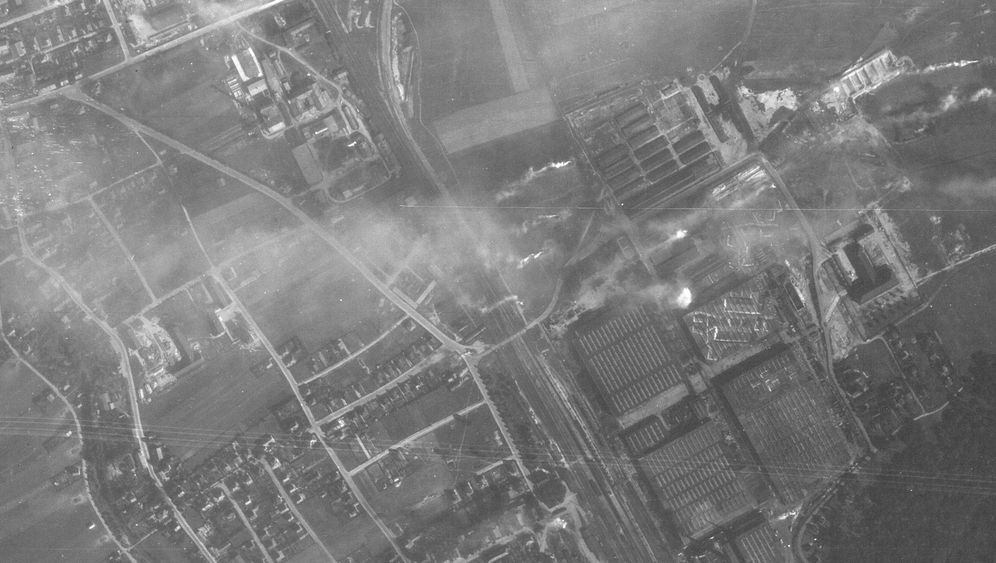 Photo Gallery: Finding the Explosive Needle in the Haystack

In 1938, German General Werner von Fritsch made a prediction. "The military with the best photo reconnaissance," he said, "will win the next war." Barely six years later, he was proven correct. Between 1940 and 1944, 2.7 million tons of bombs were dropped on Germany and occupied Europe by British and American bombers. Each bombing raid was guided by extensive analysis of aerial photography that was cutting-edge for its time. The effect of each raid was measured by yet more aerial photos.

More than 70 years after the first bombs fell, those photos are being used with increasing frequency to heal the wartime damage that still lingers, hidden under the city streets and open fields of modern Germany. Using images from vast wartime archives in Britain and the United States, German authorities and private companies locate buried, unexploded bombs and avert the risk that construction workers set them off accidentally during building projects.

One of the leading private bomb sleuths is Hans-Georg Carls, a pipe-smoking geographer who has been collecting and organizing images from World War II for more than 20 years. When construction companies in Germany are looking to dig a pipeline, lay down a new highway or excavate an underground parking garage, they call Carls' company, Luftbilddatenbank, German for "Aerial Photo Databank," to see if there's a chance they might strike a buried WWII bomb.

There's no shortage of clients. The Journal of Mine Action, an academic publication, estimates that half of the ordnance dropped during the war failed to explode. That means that for every bomb crater photographed from the sky after a bombing raid, there's a dud that may still be embedded in the ground and could still blow at the slightest movement. WWII bombs have killed dozens of people in the last 20 years, and cost untold millions in economic damage as offices, schools and train lines are shut down while bombs are removed.

The work of finding and removing them employs thousands of people across Germany. In Berlin alone, 2,000 have been recovered since the end of the war; an estimated 15,000 are still hidden under the capital. Although each German state runs its own wartime debris removal programs and keeps separate records, Carls says an estimated 20,000 tons of WWII material are recovered across the country each year. For decades, bombs just kept turning up, sometimes with deadly results. Today, digital tools are being used to find bombs before construction work starts.

Luftbilddatenbank, based on the top floor of Carls' home just outside Würzburg in the southern state of Bavaria, specializes in finding bombs using old aerial photos. In the last five years, the company has digitized hundreds of thousands of images, developing a database of geographical coordinates and archival reference points that let them request photos of specific locations from collections of wartime photos in Washington, DC, and Edinburgh, Scotland.

The photos usually show a "before" and "after" view of a raid, with images taken just days or weeks apart. Where wartime analysts used machines called stereoscopes to look at the images in 3-D, Luftbilddatenbank technicians use digital software. They can then spot craters -- an indication that a bomb exploded -- and dark pinpoint holes, which suggest a dud that might still be buried under the surface.

'The Smallest Vibration Can Set them Off'

Business for Luftbilddatenbank and companies like it is picking up, Carls says. German law holds property owners partly responsible for any accidents, encouraging them to do everything they can to research projects that might involve digging. "When people are spending billions of euros to build a pipeline, a consulting report isn't a big deal," Carls says. "What property owner wouldn't take the extra step to make sure nothing went wrong?"

Carls says there's another factor at work: time. "Before, we had eyewitnesses, but they are dying," he says. With no one left alive who remembers where the bombs fell, the evidence from wartime photography is even more critical.

And with each passing year, the bombs themselves get more dangerous. Most duds fail to explode because of a faulty detonator or timer. Often set on a time delay, designed to explode and kill firefighters and rescue workers arriving at the scene of a raid a few minutes or hours later, the timers are made of plastic. Over time, "the plastic gets older and decays," says Wolfgang Müller, Luftbilddatenbank's director. "The smallest vibration can set them off."

Carls says his competitive advantage is knowing how to find images fast. During the war, a complex indexing system let military photo analysts find the right image out of millions in under two minutes -- without the help of computers. By teaching himself how aerial observers and intelligence officers cataloged the millions of images taken during the war, Carls was able to create a digital indexing system of his own.

'We Haven't Had Any Complaints'

Now, when a client asks for an analysis of a specific piece of ground, Carls can either reach into his own archive or make a quick call and get the exact images he needs. "They've created a very impressive resource," says Allan Williams, curator at the National Collection of Aerial Photography in Edinburgh. The Edinburgh collection holds tens of millions of photos; the National Archives in Washington own millions more.

Carl's measures his success not in the number of bombs found -- lots of areas his firm is asked to survey weren't hit during the war -- but by the lack of complaints. "All it would take is for us to miss one," he says. "But we haven't had any complaints."

Williams says 95 percent of the archives' work involves bomb disposal, mostly in Germany, Austria and Holland. But in the age of Google Earth, more and more researchers are tapping the Edinburgh archive's aerial photography collections, for everything from history documentaries to landscape archaeology. "Aerial photography is a means of looking at history in a completely different way than people are used to," Williams says. "People are always amazed at how much aerial photography survives."