If the German economy had a family doctor, it would be Bert Rürup. A professor in the western German city of Darmstadt and the chairman of the German Council of Economic Experts, which advises the government on economic policy issues, Rürup has spent decades keeping a critical eye on economic developments in the country.

And the professor is currently relatively pleased with his patient. Just a few years ago, Germany was widely considered the sick man of Europe. But the country has recently shown significant signs of recovery. Unemployment is declining consistently while growth is solid. And the government's finances -- Germany's immune system, if you will -- have been recovering at a record rate.

But what pleases Rürup most is the observation that his patient's defenses have improved. "The German economy has become more resistant," he concludes with satisfaction. The next downturn, he says, will be shorter than the last slump, "because the labor market and wage structures have become more flexible."

Germany can't afford a weak immune system, because the risk of infection is everywhere. In the United States, the ongoing financial and real estate crisis could plunge the country into a recession, and the negative impact on Germany, as an exporting nation, would be unavoidable. The price of oil recently crossed the $100-a-barrel threshold, and the euro is continuing its rise.

In recent years, only one of these developments would have been enough to nip a German recovery in the bud. But this time the economy is showing an astonishing resistance to what economists call "external economic shocks." It's even weathered a homemade shock: In addition to other burdens, Germany's economy and its consumers have been saddled with the biggest postwar increase in the rate of value-added (sales) tax, which was raised from 16 to 19 percent in January 2007. 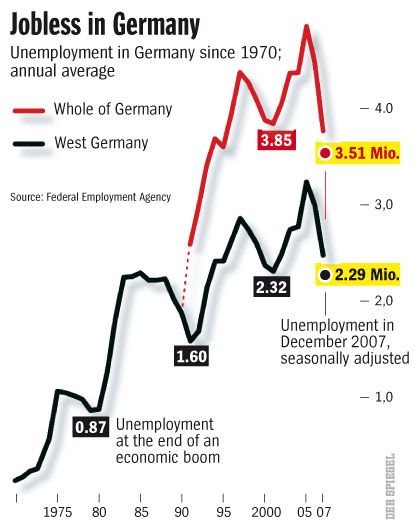 The current level of unemployment is lower than at the end of the last upswing.

But the economy has remained unflustered by all of these affronts, growing at an unexpectedly strong rate of about 2.5 percent in 2007. Things aren't looking quite as good for 2008, however, as a number of research institutes have adjusted their forecasts downward to just under or just above 2 percent. Nevertheless, this is still three times the German economy's average annual growth rate during the slow years at the beginning of the decade.

All of this suggests a remarkable elasticity and flexibility in the economy, which is attributable to a number of causes. German companies have done an outstanding job of adjusting to the needs of the global market. They are innovative, flexible and efficient.

The parties to wage negotiations have also helped the economy. Germany's unions have accepted far lower wage increases in recent years compared to unions in other countries. This has boosted the competitiveness of German economies and of their products on the global market.

But what has contributed to Germany's revitalization most of all was a treatment prescribed by former Chancellor Gerhard Schröder. "The Agenda 2010 reforms are part of the reason Germany is doing so well today," says Rürup.

While the package of reforms, which Schröder's coalition government of Social Democrats and Greens launched in 2003, certainly did not trigger the upswing, it did help to jumpstart the economy when the global economic boom finally reached Germany.

One of the triggers was the reform that combined unemployment assistance and welfare payments into a new entity known as Unemployment Benefits II. "The incentives to work have increased, especially for the qualified unemployed," says Dennis Snower, president of the Kiel Institute for the World Economy (IFO).

As a result, the number of unemployed Germans declined much faster than during previous upswings. Since the beginning of 2006, 1.6 million people have been stricken from the unemployment rolls. But what is most significant is the fact that, for the first time in decades, the number of job seekers is smaller than during the previous boom. Even at its height, more than 3.8 million people were still looking for work. In December 2007, the number had declined to only 3.4 million, which was much smaller than expected.

Research institutions predict that the average annual level of unemployment could decline to 3 million people, or even less, by 2009. The last time this happened was in 1992. "This development is more than an economic trend," says IFO President Hans-Werner Sinn, who until now has been among the skeptics when it comes to the outlook for the German economy. "Something significant has happened in the labor market."

As unemployment declines, the number of the employed is growing. More than 40 million people have been employed in Germany since September 2007, the country's highest employment figure ever. Despite the pressures of globalization, Germany has consistently proven wrong the assumptions that it would soon run out of work for its labor force.

Critics contend that the reduction in unemployment exaggerates the dynamism of the labor market. The number of job seekers, they argue, is also declining for demographic reasons, because an aging society translates into a reduction in the labor supply.

Gustav Adolf Horn, the head of the Macroeconomic Policy Institute, a group with ties to trade unions, even claims that fewer jobs are being created in the current upswing than in earlier booms. "The effects of labor market reforms have been virtually nil so far," he says. Although employment is growing at a faster rate than before when measured in working hours, he says, the number of workers is not growing as substantially. According to Horn, only about 700,000 new jobs have been created in the current recovery, compared with 1.3 million in the last upswing.

Horn attributes this difference to the growth in flexibility in recent years. In the last boom, many minor and part-time jobs inflated the employment statistics. In the current upswing, these same jobs are being converted into full-time positions. The prolongation of working hours, according to Horn, has also led to the creation of fewer new jobs.

Other researchers have come up with higher figures. Klaus Zimmermann, the president of the German Institute for Economic Research, says that 1.3 million new jobs were created within the last year and a half. The difference between Horn's and Zimmermann's figures lies in the fact that Horn defines the fourth quarter of 2004, which was still a time of mass layoffs, as the beginning of the current recovery. Zimmermann, however, believes that the recovery began with its positive impact on the labor market in the spring of 2006, an effect that still hasn't ended.

Nevertheless, even Horn admits that Schröder's reform agenda was not entirely useless. The work incentives it created will encourage more people to seek jobs when labor becomes scarce after a prolonged recovery. "It's possible the upswing will last longer than would have been the case without the reforms," Horn says.

Irrespective of the actual number of new jobs, both schools of thought are pinning their hopes for a continued upswing on the new additions to the ranks of the employed, who could play an important role in stimulating consumer spending.

Those with new jobs are more likely to spend money than the unemployed. Those who were concerned about losing their jobs during the economic crisis can now feel relatively secure about keeping them. This too stimulates consumption.

"Employees will also feel the effects of the recovery in 2008," predicts Rürup. He expects gross salaries to increase by 1.5 percent, adjusted for inflation, "the biggest increase since 1995." According to Rürup, this would finally establish the conditions to boost chronically fluctuating domestic demand and turn it into a key engine of the recovery -- and enable Germany to at least partly escape the effects of global economic turbulence.