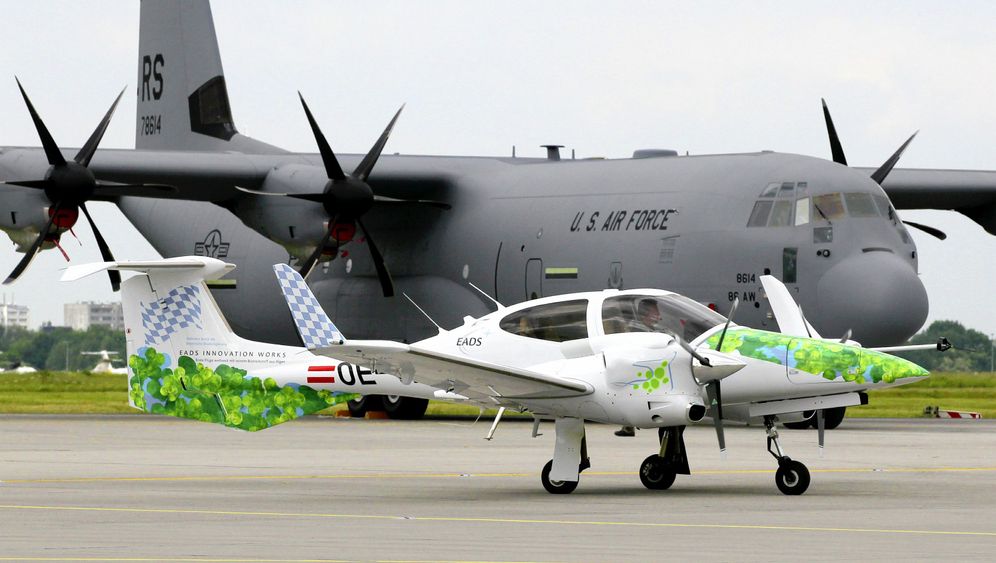 Sometimes Otto Pulz has to improvise to make things work. Pulz, a biotechnologist in the eastern German state of Brandenburg, was recently planning a test flight for a small aircraft and needed fuel. After making a number of phone calls halfway around the world, he even ordered a few hundred liters of the miraculous fluid from as far away as Argentina.

"We scraped together everything we could get our hands on," says the scientist, as he holds up a tiny bottle of greenish-yellow oil. "The first car was also powered by fuel from a pharmacy."

The substance that scientists hope will make flying greener is derived from algae. This chemically refined fuel is expected to gradually replace kerosene in civil aviation.

Once they had collected enough of the fuel, Pulz and his team achieved an important breakthrough last month. For the first time in history, a small aircraft, a Diamond DA42, its engines driven solely by pure algae fuel, lifted off at the International Aviation Exhibition (ILA) in Berlin.

Harnessing the Power of Algae

"This material will change the rules of the game in our industry," Christian Dumas says joyfully. The Airbus executive is standing next to a bioreactor the size of a shipping container, as Pulz explains to him how the algae grow and thrive in the maze of glass tubes. The reactor is a prototype, and scientists are still a long way from being able to produce enough algae material to fuel a passenger aircraft. Nevertheless, Airbus is investing in the eastern German venture. "They are simply several steps ahead of everyone else at the moment when it comes to the development of biofuel for aircraft," Dumas says.

Pulz arrived at his current venture in a roundabout way. In fact, as a researcher at the Institute for Cereal Processing near Potsdam, outside Berlin, his experience is in a completely different industry. Pulz was already studying algae at the institute when it was in the former East Germany. "Back then," says the bio-pioneer, "we were interested in applications for baked goods."

Now he hopes to harness the power of algae to put people up in the air. According to optimistic estimates, half of all aviation fuel could come from biological sources by 2040. A number of airlines are already getting involved at this early stage. British Airways, for example, plans to build a plant in eastern London that would produce biofuel from refuse.

Time is of the essence. The airlines know that they have to reduce their greenhouse gas emissions very soon. The industry is only responsible for about 2 percent of worldwide CO2 emissions, or about half as much as the cement industry. But in the public consciousness, flying is high on the list of sinful behavior.

"We need a solution that's as straightforward as possible and can be easily implemented," says Joachim Buse, who is in charge of introducing biofuels at Lufthansa. "In the next two years, we already plan to launch long-term tests in regular passenger operations."

Unlike the automobile, in which electric motors can be used, aircraft will still have to rely on combustion engines in the future. "You're not going to get a 300-ton bird off the ground with electricity," says Buse.

The conversion isn't going to be easy. Turbines in passenger jets worldwide currently burn 200 million tons of kerosene a year. But the annual production of algae oil, most of which is now used in the cosmetics industry, amounts to a paltry 10,000 tons. "That's half of what we use in one day," says Lufthansa executive Buse.

Using current production technology, breeder reactors covering an area of 68,000 square kilometers (26,250 square miles), or about the size of Ireland, would be needed to replace total kerosene consumption with algae fuel.

With the help of sunlight, the tiny aquatic organisms convert carbon dioxide from the air into oil. Biotechnologist Pulz plans to feed the algae with CO2 derived from the emissions of coal power plants.

The aviation industry wants to avoid some of the mistakes that were made in the auto industry, such as the premature use of bioethanol as an additive in gasoline. The biofuel used in cars comes from corn and sugarcane, two food crops that suddenly shot up in price as a result of new competition from the biofuel industry. The aviation industry also doesn't want to see forests cut down or farmland converted for biofuel production. "That would no longer have anything to do with sustainability," warns Lufthansa executive Buse, who knows how skeptical environmental organizations will be of the airlines' environmental awakening.

This is where algae, jatropha plants or halophytes (plants adapted to living in a saline environment) come in as fuel sources. They can be grown in places that were previously wasteland. "Algae produce the largest amount of biomass in the smallest area," says Pulz.

Algae oil is currently undergoing a stringent certification process. At the Institute of Combustion Technology, part of the German Aerospace Center in Stuttgart, chemist Clemens Naumann is studying the properties of the plant extract.

"In a refinery, the substance can be provided with almost the same characteristics as conventional kerosene," says Naumann.

The eco-fuel even offers a surprising benefit. Algae oil contains about 10 percent more energy than kerosene. "Planes will be able to fly farther with the same amount of fuel in their tanks," says Naumann.