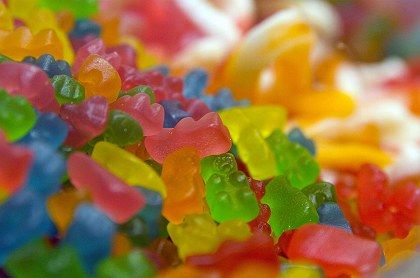 If crops continue to be more lucrative as biofuels than foodstuffs, then gummy bears could soon become a candy only the rich can afford.

First it was tortillas in Mexico, then it was Frosted Flakes in America and recently German beer. Now the latest food to become the victim of prices pushed up by the massive shift of crops to biofuel are Germany's beloved gummy bears.

Prices of glucose, the second main ingredient in the chewy candies after sugar, rose by 30 percent in 2006.

"We're going to maintain current prices through the end of the year," Marco Alfter, a spokesman for Bonn-based gummy bear-maker Haribo, told SPIEGEL. But afterwards, the golden bears could get more expensive.

Haribo is one of a number of companies in the German food and beverage industry that has been critical of shifts in crops away from foodstuffs in order to accommodate production of biofuels, which emit less CO2 than regular gasoline and reduce dependency on energy sources in volatile regions. Representatives of mills, major bakeries, sweets companies and animal feed companies in Germany have joined forces to create the "Netzwerk Lebensmittel-Forum" ("Food Forum Network"), which is seeking to raise awareness about the dangers associated with replacing food agriculture with crops for biofuels.

"In two to four years, we could be faced with substantial problems when it comes to feeding the population," warned Karl-Heinz Legendre of the margarine industry association. Prices for palm and canola oil, wheat and corn have already risen dramatically.

"The decisive factor will be if the government continues to subsidize the burning of food," said Alfter, in reference to government subsidies given to farmers who produce biofuels using crops traditionally used for food.

Peter Hahn, director of the German Brewers' Federation, said the popularity of biofuel crops has also led to a drop in the farming of barley because farmers get double the subsidies for biofuel. The result: the price for a ton of malt has doubled this year.

"These massive subsidies cannot be at the expense of food production," Hahn said in a recent press release. "They are an unfair intervention in the market to the detriment of the food industry and the consumer."

The tense raw materials situation is expected to be one of the major issues addressed at this year's annual conference of the Federation of German Food and Drink Industries (BVE) in October.