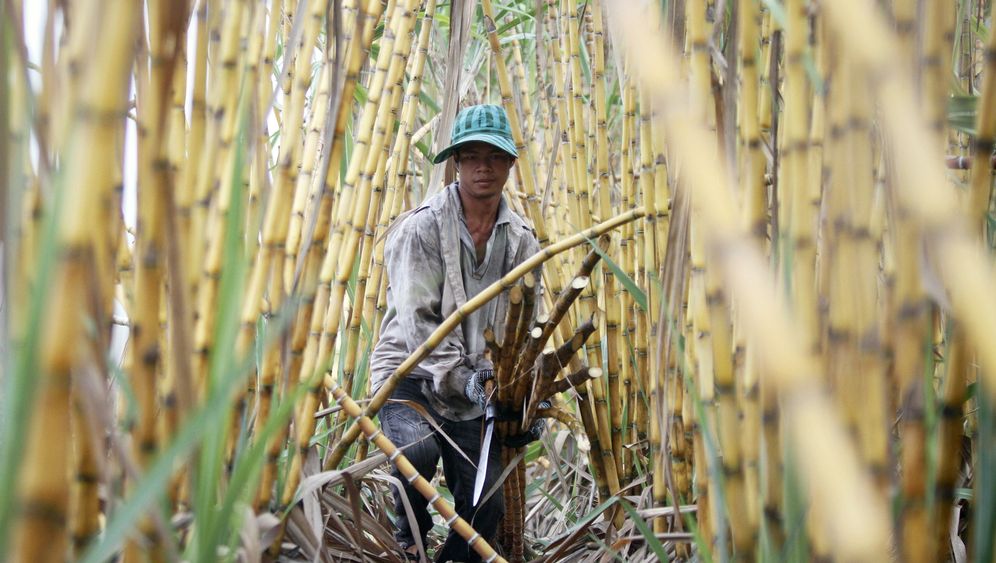 Photo Gallery: Forced Off Their Farms

Everyone in the Cambodian village of Chouk remembers what happened on the morning of May 19, 2006, when bulldozers appeared on National Route 48, which cuts through the town. Men from a Thai company, Khon Kaen Sugar Industry PCL, presented the Cambodian villagers with documents and said: "This land now belongs to us."

Dozens of farmers tried to stop the bulldozers when they began leveling their rice fields. The police arrived at the scene, shots were fired and a female protester was injured. A barbed-wire fence now surrounds the fields, which have since become a sugarcane plantation. Farmer Teng Kao, 53, winds his way through fences, jumps across ditches and finally points to a spot in the distance. "Back there," he says. "That was where my fields were."

Two hundred families from Chouk lost their livelihood that day. "We aren't poor - we're very poor," says farmer Chea Sok. "I can no longer afford three meals a day." Many young people have left Chouk, with some becoming migrant workers in Thailand and Malaysia.

Many Cambodians have suffered the same fate as the villagers from Chouk. Companies and privileged elites, often members of the ruling Cambodian Peoples' Party under Prime Minister Hun Sen, are taking possession of fields and forested areas.

The companies, often foreign, receive "economic land concessions" from the government when they need land for plantations and factories. Cambodian non-governmental organizations estimate that about 400,000 people have been driven out in this fashion since 2003.

Land grabbing is a worldwide phenomenon, but Cambodia is unique because the German government plays a controversial role there. According to human rights activists, German taxpayer money is being used to fund a program that inadvertently benefits the land grabbers.

"We are on the road to becoming a society of large land owners," says Lao Mong Hay, a veteran Cambodian civil rights activist. With his white beard, he resembles a Confucian scholar. "The ruling elite is allied with big business, and together they are making a quick buck," he says. He presses his fingers together to illustrate this unholy alliance. "All they need is the land, a few saws and a few tractors," he says, "and before long the forest has been cut down."

Companies are taking advantage of an unclear legal situation. No one knows exactly which land is privately owned and which land belongs to the government, partly because the relevant documents disappeared years ago. The Khmer Rouge, who ruled the country from 1975 to 1979, declared every square centimeter of Cambodian territory to be government property.

The parliament has since passed legislation that entitles every Cambodian to the land he or she has farmed for at least five years. If the land is taken away, the owner is to be compensated. But there is "great injustice," says Lao Mong Hay. "The laws are bad, and they are poorly implemented."

Christina Warning of German Agro Action (Welthungerhilfe) has experienced this firsthand. "In one village," she says, "they got people drunk so they would place their fingerprints at the bottom of a contract. All they received in compensation was clothing, medication and mobile phones." And they no longer owned their fields.

Last year, the UN special rapporteur on the situation of human rights in Cambodia reported that only a minority benefits from the awarding of land concessions, while businesses operate "behind a veil of secrecy."

The situation in Cambodia also raises questions about the degree to which foreign aid workers can work together with an authoritarian regime. Land grabbing is likely to be a subject of German-Cambodian talks in Phnom Penh in early December. German Green Party politician Thilo Hoppe wants Berlin to "suspend government cooperation" if necessary. The World Bank took a similar step when it cancelled loans in 2011 to Cambodia over the evictions of poor landowners.

The Cambodian government is at least promising to establish greater legal certainty. Under its plan, all citizens will be able to register their property, for which a land registry agency is being created. About 2 million people had land titles by the end of 2012.

Germany is assisting the Cambodian government in developing the agency. Land registry experts with the German Society for International Cooperation (GIZ) have advised Cambodian officials since 2002. But now "the Germans have become part of the problem" says Eang Vuthy of the NGO Equitable Cambodia.

Other civil rights activists and German aid workers accuse GIZ of glossing over the fact that Prime Minister Hun Sen is merely using the project to create the impression that the underhanded land grabs are legal, and they argue that he has no intention of fairly distributing land.

For instance, the Germans are not permitted to travel out into the countryside to verify that the assignment of land titles is in fact being implemented. According to Vuthy, Premier Hun Sen would consider it interference in his country's internal affairs if the Germans were to review individual cases to ensure that their project is indeed creating justice. "But the Germans ought to know what is being done with their tax money," says Vuthy.

GIZ Regional Director Adelbert Eberhardt's office is located in a building near the Independence Monument in Phnom Penh. He's familiar with the criticism of his program. Nevertheless, he says, "if you want to make anything happen, you have to work together with government agencies. This makes you vulnerable. It's a balancing act we have to put up with." But Eberhardt notes that the benefits of the program outweigh its drawbacks. "We will create legal certainty for 6 million people," he says. "Two million have it already."

The Foreign Ministry in Berlin also defends the cooperation with Hun Sen. In a closed-door discussion about the land program with experts in Phnom Penh, a diplomat pointed out that the German government cannot force the prime minister to do anything. "Constructive engagement" is better than terminating the cooperative arrangement with Hun Sen. "We can't achieve everything everywhere at the same time," the diplomat says.

Manfred Hornung of the Heinrich Böll Foundation, who works a few kilometers away from Eberhardt's office, says: "The people at GIZ have no proof of the 2 million land titles. After all, they haven't been out in the countryside, and they have no idea about what's going on."

The European Union's approach is even more controversial, because it indirectly facilitates the land grabs. In 2009, Brussels granted Cambodia the right to export sugar to the EU duty free. But that only exacerbated the problem, says Evi Schueller, an American lawyer with the Cambodian human rights organization Licadho. "Thousands suffer when they lose their land to make way for sugarcane plantations," she says.

In 2012, the European Parliament adopted a resolution on the sugar business, criticizing what it calls "serious human rights violations in connection with land concessions."

However, the European Commission refuses to suspend Cambodia's duty-free access privilege for all of it exports. "It doesn't recognize the report by the UN special rapporteur," says Schueller. "Instead, it wants one from the UN Human Rights Council in Geneva. That's absurd."