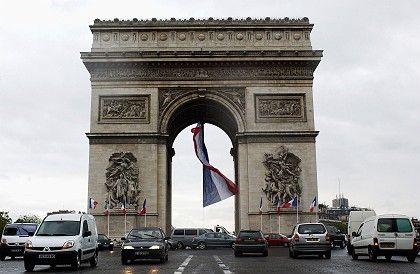 One big problem France has is it's rigid anti-layoff laws, which force employers to engage in long, expensive negotiations in order to downsize. That has discouraged employers from hiring, and has led in recent years to a surge in outsourcing of jobs.

In any country but France, it would look like a mandate for sweeping change. On May 6, conservative Nicolas Sarkozy handily defeated Socialist Ségolène Royal to become President of France, after a campaign that drew stark contrasts between his support of free-market economics, and her more left-leaning platform.

Yet even Sarkozy's strong showing at the polls -- just over 53 percent, with a near-record 85 percent turnout -- won't easily translate into an overhaul of the country's stagnating economy.

Getting legislation enacted won't be a problem, because Sarkozy's center-right UMP party is likely to win a comfortable majority in parliamentary elections next month. But labor unions are already threatening strikes over some of his proposals, such as his plan to encourage people to work more than the current maximum 35-hour work week, by exempting them from taxes on overtime hours.

To defuse the labor protests, Sarkozy and his government will have to rally the country behind his program. Otherwise, the strikes could spiral into a crippling public backlash, as happened last year when mass protests forced the former center-right government to withdraw an unpopular youth employment law.

Sarkozy has already laid out his economic program in considerable detail, promising action on key elements during his first 100 days in office. To boost employment, he would ease the 35-hour work week and tighten eligibility for unemployment benefits. To curb public spending, he plans to trim the civil service by replacing only half the workers who retire in coming years. And, in a dose of supply-side economics, he wants to trim inheritance and wealth taxes, as well as some business taxes, and introduce a tax deduction for mortgage interest payments as now exists in the US and Britain.

But the 52-year-old Sarkozy -- to address a question posed repeatedly during the presidential campaign -- is not France's Margaret Thatcher. The economic program he has outlined so far would yield only modest improvement in growth and unemployment. To give the economy a real boost, Sarkozy would have to take aim at some of France's most sacred social protections. It's doubtful that most French people really want that. In fact it's not even clear that Sarkozy himself does.

One big problem is France's rigid anti-layoff laws, which force employers to engage in long, expensive negotiations in order to downsize. That has discouraged employers from hiring, and has led in recent years to a surge in outsourcing of jobs. Another big problem is the ballooning cost of government-paid health and retirement benefits, which saddle employers with some of the heaviest payroll taxes in the world.

Sarkozy is certainly aware of these problems. But despite prodding from the business community, he said little about them during the campaign. That's not surprising. The law that triggered last year's paralyzing strikes was a relatively mild plan to roll back anti-layoff protections for younger workers. Scaling back generous health and retirement protections would be politically explosive too -- not just among Socialists and labor militants -- but also among the millions of voters who supported Sarkozy.

For now, France Inc. is giving him the benefit of the doubt. The leading French employers' group, known as the Medef, on May 7 hailed his election as "a new page being turned for France," a sentiment echoed in statements by other business groups.

Investors reacted more cautiously, with the Paris stock market remaining flat on May 7, the first trading day after his victory. The market was rife with rumors, though, reflecting expectations that Sarkozy may exercise a dirigiste industrial policy -- as he did previously as Finance Minister when he orchestrated a state bailout of engineering giant Alstom. A report by the Journal du Dimanche newspaper, for example, said Sarkozy might use France's stake in the European Aeronautics Defence & Space Co., the parent of troubled planemaker Airbus, to force a management shakeup. Sarkozy's spokesman declined comment.

At least the new President will have a solid team behind him if he decides to tackle deeper economic reforms. His Prime Minister is likely to be either former Education Minister François Fillon or the current Employment Minister, Jean-Louis Borloo. Both are seasoned, likeable politicians who could offset Sarkozy's often harsh and polarizing demeanor.

Perhaps the best news of all for advocates of economic reform is that France's new President will be deeply engaged in economic policy. For the past 12 years, Jacques Chirac delegated that role to his Prime Minister and Cabinet, generally weighing in belatedly when crises arose. Sarkozy, in a jab at his predecessor during his debate with Royal on May 2, promised to "speak more frequently to the French."

Change is coming to France all right, but remember, this is the country that coined the adage, "Plus ça change, plus c'est la même chose."