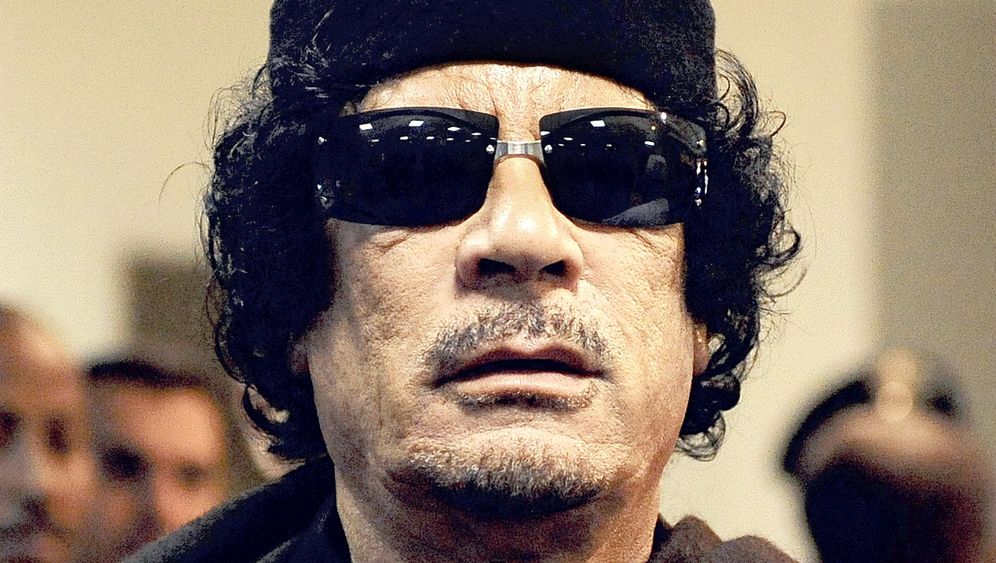 The German bank Commerzbank received an unusual transfer order in late February. The amount was €1.9 million ($2.7 million) and the bank was instructed to immediately transfer the funds from a Commerzbank account to a foreign account with another bank.

The holder of the Commerzbank account was Saif al-Arab al-Gadhafi, born in 1982, the presumed youngest son of Libyan autocrat Moammar Gadhafi. The dictator's son, who had been living in a villa in Munich's Waldperlach neighborhood, suddenly left Germany and returned to Tripoli -- a sad loss for those members of Munich's jet set that had become accustomed to attending the younger Gadhafi's wild parties.

Commerzbank was reluctant to transfer the money and notified the authorities. The German Ministry of Economics, which has jurisdiction over such matters under the Foreign Trade Act, ordered the account frozen, adding that Gadhafi's son had to be prevented from removing the funds from the country. As a result, the money is still collecting interest in the Commerzbank account today.

The move, which occurred a few weeks ago, marked the beginning of a global treasure hunt. Throughout the Western world, investigators are now tracking down the money the Gadhafi clan earned in the oil business in past decades and set aside. And it's not just the Gadhafis. In addition, there are worldwide efforts underway to uncover the silent reserves of other potentates.

The United States has already frozen Gadhafi regime assets worth more than $60 billion (€42 billion), which includes about $32 billion in the United States, close to $20 billion in Great Britain and $1.7 billion in Austria. The amount of Libyan money in German banks, almost $9 billion, is surprisingly large, given that Gadhafi's terrorists blew up the La Belle nightclub in Berlin more than 25 years ago, killing three and injuring 230.

But even as the search for the Gadhafi billions progresses, what will happen with the frozen funds remains completely unclear. Serious problems have arisen in connection with the attempt to deprive the Gadhafi clan of its funds.

Indeed, the fortune hunters could suffer a setback, particularly given that it has become increasingly clear how close relations were between the Libyan dictator and Western countries. Furthermore, Gadhafi's cash is not the direct result of fraud, but came from profits from his perfectly normal businesses.

The hope in Germany had been to use the billions in Gadhafi assets to support the rebel troops in eastern Libya and to pay for humanitarian aid to the victims of troops loyal to the dictator. The thug of Tripoli was to be defeated with his own money. It was a wonderful idea, as the so-called Libya Contact Group concluded during a meeting on the Thursday before last.

The group, consisting of foreign ministers from more than 20 countries, including German Foreign Minister Guido Westerwelle, announced that it was setting up a special fund for the rebels. For a moment, it seemed as if global politics was simple.

Now, though, it has become clear to those involved that the matter is far more complicated. In an internal assessment, German government experts conclude that even a dictator can invoke the constitutional protection of his property, at least as long as he is in power in his country. Although the German government can freeze his account, it cannot withdraw funds from them. Until further notice, the money belongs to the Gadhafi regime.

The German government experts say that expropriation of the Gadhafi funds would require approval under international law, which is unlikely to occur. Russia and China have made it clear that they will not support another anti-Gadhafi resolution in the United Nations Security Council.

The West has maneuvered itself into an embarrassing position. The money it has already promised the rebels to fund their struggle for freedom is in fact not even available yet. The mood within the German camp, not surprisingly, has sobered significantly. After the German government did not vote for military action against Gadhafi in the Security Council, Germany wanted to show a particularly strong commitment and "make the frozen assets available to the Libyan people for its use as soon as possible," according to an Economics Ministry document.

The amounts in question are enormous. According to a German government overview, Gadhafi's account with the German central bank, the Bundesbank, has a balance of €1.96 billion. The rest of the money is distributed among almost 200 accounts with more than 13 other financial institutions.

A few accounts are registered directly in Moammar Gadhafi's name, while others are in the name of one of his sons. In most cases, the balances are denominated in US dollars. The scrupulously correct Germans have used the exchange rate from early April to convert the funds into euros.

Even Gadhafi's wife, Safia Farkash, has an account, which investigators had almost overlooked, because of inconsistencies in the spelling of her name. Fortunately, there wasn't very much money in the account; the loss would not have been significant.

Another surprising catch was found on board the Sloman Provider, a container ship operated by a shipping company in the northern German port city of Bremen. The ship was en route to Tripoli in early March, carrying banknotes denominated at more than €100 million, produced by a printing company in Great Britain. The British Navy stopped the ship and forced it to turn around and sail back toward England.

The Libyan rebels could clearly use the money. Last Thursday, their representative Mahmoud Jibril came to Washington to ask for support. "We face a real crisis: We are running out of money," said Jibril. The rebels need about $3 billion for the next six months alone, he added, and they need the money soon, "or else it could be too late."

Washington would in fact like to help the Libyan rebels, but first it wants to establish an additional legal basis for such support. President Barack Obama has decided not to proceed with the seizing of Gadhafi assets without the support of other countries, even though this would be possible under American law. He also wants Congress to address the matter.

Secretary of State Hillary Clinton announced a proposal to amend the law in a way that would allow the US government to seize a portion of the Gadhafi fortune -- about $150 million -- and devote it to humanitarian uses in Libya. A committee would be formed to ensure that the funds are used correctly. But weeks or even months could pass before US lawmakers vote on the measure.

Inconveniently, only a small portion of the assets frozen in the United States, unlike those in Germany, consists of money in bank accounts. Most of the Gadhafi assets are invested in company shares and real estate, which is difficult to convert into cash.

For this reason, Gadhafi's fortune was easily frozen in the United States but is not as easily confiscated, says Stuart Levey, until recently the Under Secretary for Terrorism and Financial Intelligence at the US Treasury Department. Levey was partly responsible for freezing the Gadhafi assets.

The United States must also pay attention to the message it sends by expropriating the assets, says Levey. "If the US is perceived as being more willing to confiscate assets than other countries are, of if the US confiscates another country's assets in less than extreme circumstances, that may become a factor weighed by central banks and soveriegn wealth funds in determiningg where to invest," he adds.

In fact, it wasn't so very long ago that Gadhafi's current opponents were treating him with respect. Banks in London, Frankfurt and New York were competing for the privilege of investing the dictator's oil billions.

Gadhafi's son Saif al-Arab, who has since been killed, was constantly in trouble with the law while living in Munich, for such suspected offences as malicious injury, violation of Germany's gun control law, tax evasion, defamation and driving while intoxicated. But there is no evidence that he fell into disgrace with his banks as a result -- not surprisingly, given the spending money of €300,000 his father supposedly sent him every month.

The West's intimate relationship with questionable rulers is now appearing in unflatteringly bright light. This year's pro-democracy movements in North Africa and the Middle East are directed against a series of potentates who were once welcomed with open arms in the European Union.

Egypt's ousted former president, Hosni Mubarak, and his family members allegedly defrauded the country of up to $70 billion. To this day, there is no trace of most of the money, although it is clear that Mubarak brought it out of the country with the help of international banks. Former Tunisian President Zine el-Abidine Ben Ali is also believed to have lined his pockets while in power.

As of last week, investigators have also officially set their sights on Syria. On Monday, the European Union published a list of 13 individuals whose accounts were to be frozen immediately. The head of the Syrian intelligence service is on the list, as are the interior minister, a Syrian businessman and member of a militia unit believed to be involved in acts of violence against the Syrian population. The EU sanctions also affect Mahir Assad, the brother of President Bashar Assad, born Dec. 8, 1967, the holder of diplomatic passport No. 4138.

Irritatingly enough, President Bashar Assad was not included in the first round. EU officials explained the decision, saying that they had wanted to give him an opportunity to react first. Of course, this means that if Assad did have significant funds deposited in foreign bank accounts, he will likely have withdrawn it by now -- thanks to the considerate behavior of diplomats in Brussels.

The EU over Switzerland

Dictators, of course, have long considered the EU a better place to invest their money than Switzerland. In Zürich, a former banking paradise, the situation has worsened significantly for kleptocrats in recent years. The Swiss have drawn extensive consequences from past scandals surrounding the secret accounts of former Haitian dictator Jean-Claude "Baby Doc" Duvalier and the former Philippine dictator Ferdinand Marcos.

Nowadays, every Swiss bank maintains lists of so-called "politically exposed persons," or PEP, which provide detailed information about potentates and their entourages around the world. The list is constantly updated. The banks are required to investigate new customers to determine their possible connections and to regularly investigate existing accounts.

Each PEP must furnish proof that funds to be invested in Switzerland were not acquired illegally. If a bank has any doubts, it must report them to bank regulators and, if necessary, break off business negotiations with the PEP. A cautionary tale is that of Credit Suisse, which did not sufficiently perform its due diligence in the case of former Nigerian dictator Sani Abacha and was pilloried as a result.

"Swiss banks have despots and their minions worldwide on their radar," says Christof Müller, a lawyer who worked for the Principality of Liechtenstein as a special investigator against Abacha. "They check very carefully up front whether funds are derived from corruption."

This explains the relatively small sums that North Africa despots are believed to have parked in Switzerland. Authorities have discovered only 410 million Swiss francs ($463 million) deposited in Swiss banks in Mubarak's name, and about 60 million in former Tunisian ruler Ben Ali's name.

Libyan dictator Gadhafi has only 310 million francs in his Swiss accounts, which is only a fraction of the money he has invested in the EU.