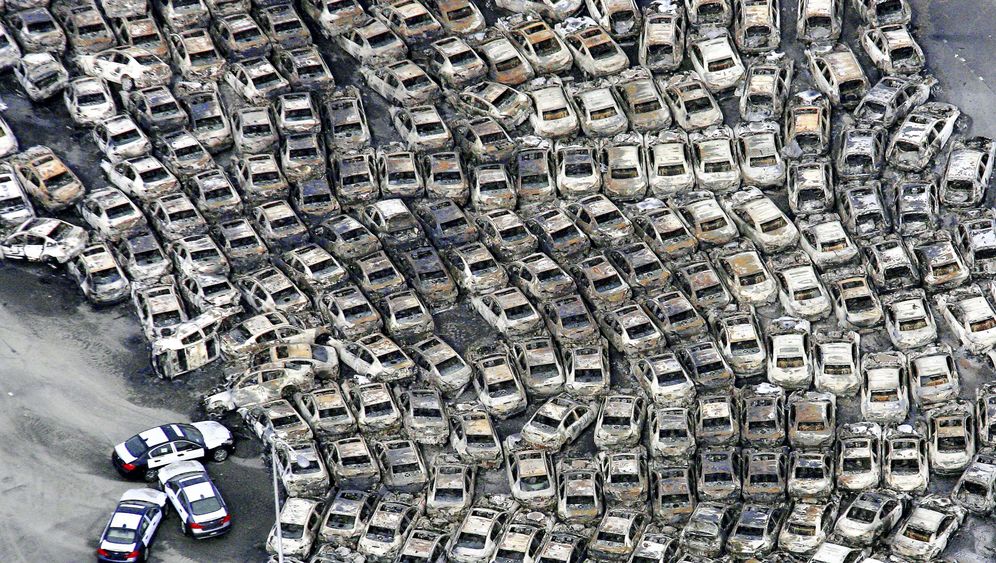 There was cheering in Tokyo, where Prime Minister Naoto Kan, 64, was the hero of the day. The newspaper Sankei called it a recipe for success for the rebirth of Japan as an industrial power, while its competitor Nihon Keizai was even convinced it had discovered a new "Japan model" in which the government and the business world together had successfully promoted the export of Japanese advanced technology.

That was more than four months ago, when a glimmer of hope flared up after two decades of ongoing crisis. Japanese companies like Toshiba, Hitachi and Mitsubishi hoped that a contract to build nuclear power plants in Vietnam, brought about by Prime Minister Kan with generous financial guarantees, would serve as a stepping stone for other major projects worldwide.

A revival of "Japan Inc.," the nation of fastidious engineers that builds some of the world's fastest trains and most durable cars, seemed to be on its way. The legend of Japanese advanced technology, damaged by an embarrassing series of recalls by major automaker Toyota, had been revived.

But then came Fukushima and the images that have shocked the world ever since. Suddenly Japan is no longer just the victim of random forces of nature like earthquakes and tsunamis. Now the once-admired high-tech nation is showing the world that it is unable to control a technology that has spun out of control.

Instead of the robots that carmakers Toyota and Honda proudly tout in their advertising, Japan is sending defenseless firemen and police officers armed with water canons into the irradiated ruins of Fukushima. Working under conditions that pose a danger to life and health, they are desperately trying to cool down the overheated reactors.

Fukushima -- this eerie word now hangs like a collective curse over Japanese industry, and no advertising campaign, no matter how clever, will make people forget it anytime soon. "This is a long-term challenge for our country," says Yasunari Ueno, chief economist at Mizuho Securities in Tokyo.

Will Radioactivity Make 'Made in Japan' a Tough Sell?

Japanese corporations from Sony to Toyota agree. Out of reverence for the victims of the earthquake and tsunami, they have cancelled commercials and print advertising campaigns. But they also know that it will be difficult to win over customers for products that are made in Japan. As if the natural disaster hadn't harmed these companies enough already, they may be forced to think of ways to calm consumers' fears of radiation -- even if those concerns may seem exaggerated to the Japanese.

Although quantities of Japanese exports of spinach, milk and bottled water to Europe are negligable, how do the Japanese intend to guarantee that their mobile phones, computers and cars do not contain parts that are contaminated with radiation?

For managers at automaker Honda's Tokyo headquarters, such questions still take some getting used to. Because the radiation levels currently being reported by the Japanese government are "very low," says company spokeswoman Akemi Ando, Honda has no plans to address its customers with special informational campaigns about Fukushima.

The automaker already has enough on its hands as it tries to restart production interrupted by the earthquake and tsunami. The forced shutdown of its plants has already been extended until next weekend, while competitor Toyota's assembly lines are likewise at a standstill. Together with Nissan, production at the giant automakers' plants is lagging behind by about 200,000 vehicles.

Even workers at plants in areas not affected by the natural disaster suddenly have nothing to do. The situation highlights the weakness of the efficiency-oriented "just-in-time" system -- the streamlined production method that has been perfected in Japan, mainly by Toyota. Under the system, manufacturers maintain almost no inventories of their own, and assembly lines can often grind to a halt on the day suppliers stop delivering parts.

The companies' crisis teams are hard at work trying to repair their supply chains. Nevertheless, the long-term consequences of the disasters are becoming more dramatic by the day. Toyota, for example, has indefinitely postponed the market launch of a new Prius minivan that had been planned for April.

A World Dependent on Japanese Manufacturers

The rest of the world is also suddenly realizing how much it still depends on Japan. The price of Apple stock took a temporary nosedive last week on Wall Street. The US computer maker buys many of the high-tech parts for its iPhones and iPads from northern Japan. Its suppliers include companies like Shin-Etsu, which most Apple fans have never heard of. The Shirakawa-based company produces an estimated 20 percent of the world's thin silicon wafers, without which Apple's digital products simply wouldn't work.

So what comes next for Japan's economy? It could certainly cope with the consequences if the country had only been afflicted by the March 11 earthquake and tsunami, but the ensuing reactor disaster has added a massive and entirely new element to the tragedy. The northeast is traditionally one of Japan's most underdeveloped areas, and it accounts for only about 4 percent of total economic output. The country's industrial backbone, on the other hand, runs south from Tokyo, along the coast and from Nagoya to Osaka and Fukuoka.

Nevertheless, the Fukushima reactor accident is turning what began as a regional disaster into a crisis for the entire national economy. The power cuts with which the Tokyo Electric Power Company, or TEPCO, is trying to offset the loss of the ruined Fukushima nuclear power plant in the metropolitan area surrounding the capital are sucking the life out of more and more industries. Tokyo, normally such a brightly lit metropolis, still seems to be in a state of shock two weeks after the earthquake and tsunami.

"Conserve electricity" is the motto that will likely cast a cloud over the daily lives of Tokyoites for a long time to come. TEPCO and the government are already warning that in the summer, when air-conditioners normally consume record amounts of electricity to combat the heat and humidity, Greater Tokyo will be short of about 10 million kilowatts of power-plant capacity. This corresponds to one-fifth of estimated peak demand.

To circumvent the power cuts, electronics companies like Sony are shifting some of their production to nights and weekends. But for highly sensitive manufacturing processes that require a stable power supply, constantly switching machinery on and off is toxic. For this reason, Mitsui Mining & Smelting stopped producing premium copper foil for smart phones in Saitama, a prefecture bordering Tokyo.

A Blow to Japanese Hopes

Ironically, prior to Fukushima Japan had just managed to pull itself together. Last year, the Japanese economy grew by an impressive 3.9 percent, thanks in part to demand from booming China. However, domestic consumers hardly benefited from the recovery. Their incomes have steadily declined since the stock and real estate bubbles burst in the early 1990s, when the aging island nation lost hope.

This had prompted the Japanese to woo newly rich guests from its booming neighbors all the more fervently. The government planned to liberate the country from its image as a giant factory by 2020, and transform it into a "first-class travel destination." It also expected about 25 million tourists to come to Japan, or more than two-and-a-half times as many as in 2010.

The Tokyo Disney Resort, Asia's most-visited amusement park, was viewed as a potential main attraction in this new sector of the Japanese economy. The Disney campaign slogan -- "Experience Disney The Way You've Never Experienced it Before" -- is still plastered across advertisements in Tokyo train stations. As a result of the earthquake, the slogan has come true in a macabre way: Mickey Mouse has been on a forced vacation since the earthquake.

Workers and excavators are currently in the process of removing gray sludge from the giant parking lot in front of Disney and sealing wide cracks in the asphalt. Because the resort complex on the Bay of Tokyo was built on landfill, water and sludge suddenly began eerily bubbling out of the ground when the earth shook.

The government estimates that the earthquake and tsunami could cost up to €220 billion, or more than twice as much as the devastating 1995 Kobe earthquake. This amount does not reflect the economic damage caused by power outages.

Japan is already suffering under the weight of its debts, which amount to more than 200 percent of gross domestic product, more than in any other industrialized country. Unlike Greece, however, Japan has borrowed most of the money from its own people.

Will the recent disaster plunge the country into an economic abyss? Or could reconstruction possibly even present an opportunity? The incalculable consequences of Fukushima make serious prognoses almost impossible at the moment. "A really bad thing has happened to Japan," says economist Ueno. As he speaks, the next aftershock is shaking the walls of his Tokyo office.