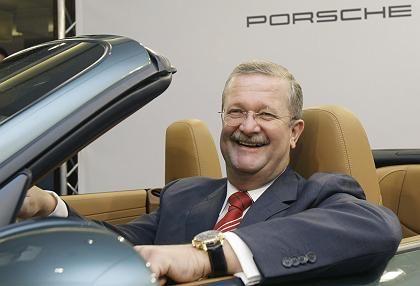 Porsche CRO Wendelin Wiedeking: "Able to measure up to the increased international competition."

German carmaker Porsche wants a majority share in Volkswagen. During an extraordinary meeting on Monday, the company's supervisory board gave the green light for the acquisition of shares. The company's chairman, Wendelin Wiedeking, has been given authority to start the steps necessary to get regulatory and antitrust approval for the share purchase. "Our aim is to create one of the strongest and most innovative automobile alliances in the world, which is able to measure up to the increased international competition," Wiedeking said. The decision was announced in a mandatory disclosure to securities officials.

Since purchasing its first shares in the company two and a half years ago, Porsche has been moving rapidly to acquire power at Wolfsburg-based Volkswagen. The company currently holds a 31 percent voting stake in VW. Monday's move became possible after the European Union's highest court last year struck down Germany's so-called Volkswagen law. The legislation limited individual shareholers' voting rights in the company to 20 percent, no matter how much they owned, to ward off hostile and foreign takeovers.

In a separate development, VW announced on Monday it was acquiring a controlling interest in Swedish truckmaker Scania.