The two were eager to demonstrate unanimity. US Secretary of the Treasury Timothy Geithner and his German counterpart, Finance Minister Wolfgang Schäuble, went before the press in Berlin on Thursday and announced that they had reached "broad agreement" on the need to regulate the global financial system.

Geithner also praised Berlin's "leadership role" in putting together the €750 billion ($920 billion) plan, agreed on earlier this month, to help European governments struggling with sovereign debt and said that he is working closely with Europe "to make sure that we are strengthening and reinforcing global recovery."

But the camaraderie displayed on Thursday belied some recent tension in the trans-Atlantic relationship. For one, the US has not been impressed with Germany's recent decision to ban certain kinds of naked short selling, considering it an unhelpful bit of unilateralism.

On a more fundamental level, however, Washington is concerned that, should Europe overreach in its rush to cut government spending, it could endanger the fragile economic recovery that has taken hold on the Continent and around the globe. In particular, the US would like to see countries like Germany and France continue efforts to stimulate their economies.

Rush for the Exits

During a stop in London on Wednesday, Geithner held discussions with his British counterpart George Osborne. According to a report in the Wall Street Journal, Geithner underlined the dangers should Europe turn away from fiscal stimulus.

Christina Romer, who heads up the White House Council of Economic Advisers and who was with Geithner in London on Wednesday, said that European countries should be wary of cutting spending too quickly. "There is a certain amount of rush for the exits on fiscal policy," she told reporters. The US is hoping that stimulus-fueled growth will ultimately result in higher tax revenues which can then be used to pay down debt.

Paul Volcker, former chairman of the US Federal Reserve and an economic adviser to US President Barack Obama, also argued recently that Europe should focus on encouraging growth rather than cutting spending. Referring specifically to France and Germany, he said in an interview with Bloomberg radio earlier this month that "it would help a lot if the rest of Europe, the strong part of Europe ... if they have more growth, that will help these countries on the periphery."

Germany, however, is taking the opposite approach. Rather than take on even more debt to ramp up the economy, Chancellor Angela Merkel wants to set an example for Europe on how to cut spending and reduce budget deficits. Her government is currently looking into ways to make significant spending cuts. Many economists in Europe even view deficit and debt reduction as a key precursor to economic growth.

"Crises often present opportunities, and it looks like Europeans are eager to take advantage," says Michael Hüther, head of the Cologne Institute for Economic Research. "Many studies show that (budget cuts) prepare the way for above average growth."

Given the different approaches, Geithner and Schäuble on Thursday were eager to emphasize their areas of agreement. Geithner did not repeat his Wednesday call for a globally consistent approach to fiscal reform -- seen as a swipe at Germany's surprise announcement last week that it was imposing a unilateral ban on some kinds of naked short selling -- and instead insisted that progress had been made on amending the global financial system ahead of next month's G-20 summit in Toronto.

Leaders, he said, were "in a very good position to put in place a much better system than we had coming into this crisis." He also insisted that the US wanted "to cover the cost of this crisis and the cost of future crises by imposing a fee on the largest financial institutions."

Schäuble said: "As far as what could be done or what needs to be done with financial market regulation, we're actually a lot closer with our assessments than it might appear at times." 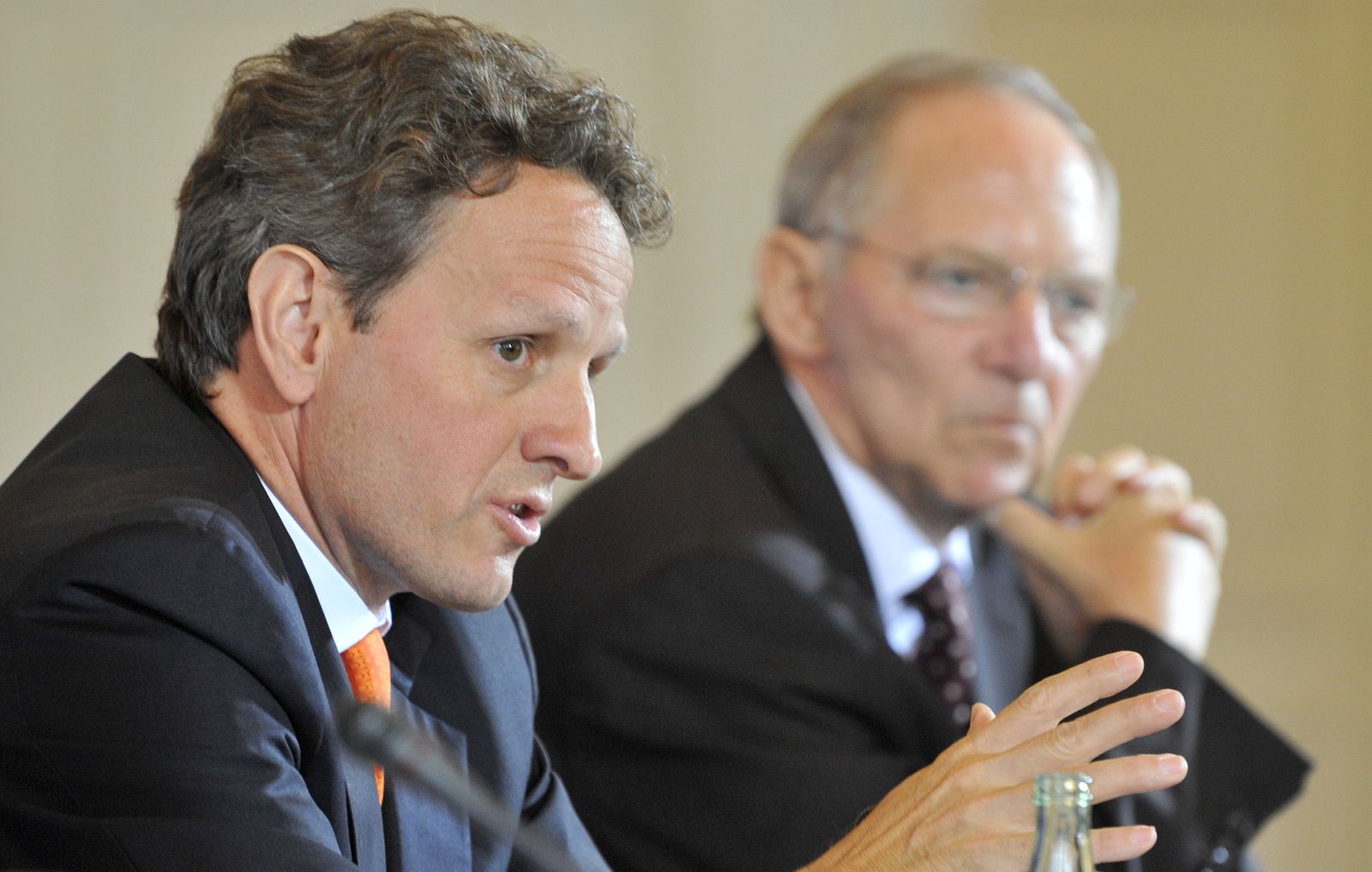