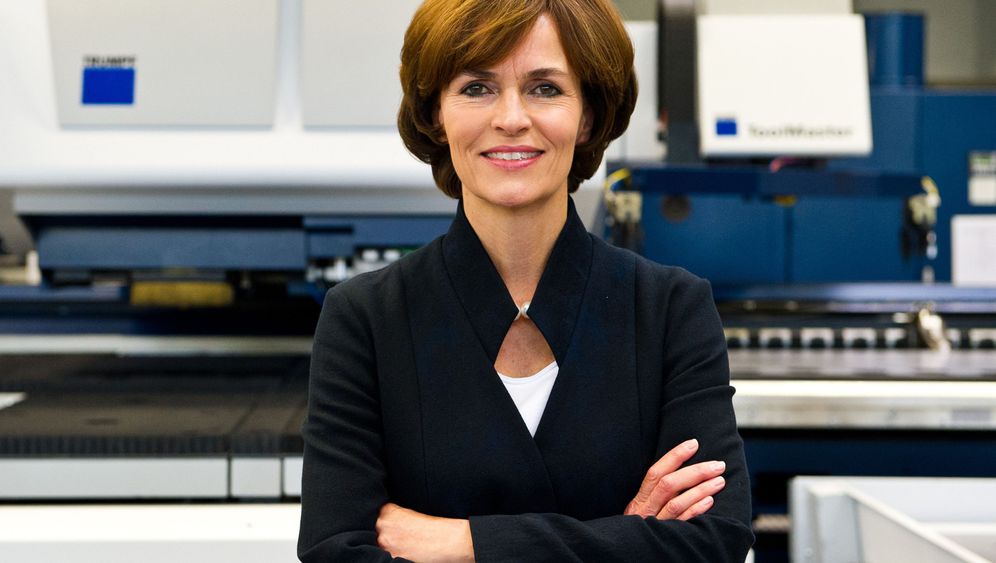 Something exceptional must have happened for Annette Widmann-Mauz to see her name mentioned in the online edition of the New Yorker. The German lawmaker from the southwestern city of Tübingen, a member of the center-right Christian Democratic Union (CDU), is the parliamentary secretary of state in the German Health Ministry, a position that doesn't garner much recognition outside professional circles.

But last Tuesday, the magazine quoted the politician after negotiators for the CDU, its Bavarian sister party, the Christian Social Union (CSU) and the center-left Social Democratic Party (SPD) had agreed to a statutory gender quota during their coalition talks. Under the agreement, 30 percent of open positions on company supervisory boards are to be reserved for women, beginning in 2016. The agreement, says Widmann-Mauz, marks a "a cultural shift in the corporate sector."

If the howls of protest immediately following her statement are any indication, Widmann-Mauz is probably right. According to corporate executives and business associations, the government-imposed quota constitutes a substantial intrusion into corporate freedom and fails to reflect the unique aspects of certain industries.

They also protested that the new rule would impair competitiveness because there are simply not enough qualified women. The chief lobbyist of German industry, Federation of German Industries (BDI) President Ulrich Grillo, even went so far as to say that management positions, including those on supervisory boards, should be "filled on the basis of suitability and performance."

This seems self-evident, even in Germany, where men have dominated corporate management and supervisory boards for decades, and the debate over putting more women in top jobs has often been derided. The situation in the 160 most important, publicly traded companies remains sobering: Women make up 17.4 percent of supervisory boards and only 6.1 percent of management boards.

This is the situation 12 years after German industry made a voluntary commitment to more gender equality. In 2001, industry leaders promised to increase the share of women in management, precisely with the aim of circumventing a legal mandate. "If industry had taken the voluntary commitment seriously, it wouldn't be whining about the statutory quota today," says Monika Schulz-Strelow, president of the Initiative for More Women on Supervisory Boards (FidAR). She believes that the agreement marks a paradigm shift. "It's no longer a question of nice-to-have," she says, "but of necessary-to-have."

But will the quota truly change the German economy as fundamentally as the reactions would suggest?

The fact is that the coalition compromise isn't nearly as groundbreaking as it appears to be. The SPD and CDU negotiators have merely agreed that, starting in 2016, "a gender quota of at least 30 percent" will apply when open positions are filled on supervisory boards, as the document developed by the two major parties states. This would mean that a third of all supervisory board members would be women by 2020. Besides, the quota only applies to the exclusive circle of companies that are publicly traded and fully required to comply with co-determination laws.

There will be no fixed quota for the far more important positions in top management. Instead, the parties' negotiators agreed on a voluntary commitment by companies, which is strongly reminiscent of the controversial "flexible quota" model proposed by Family Minister Kristina Schröder (CDU).

The roughly 2,000 publicly traded companies or companies required to comply with co-determination laws must establish "binding targets for increasing the share of women on the supervisory board and the management board, and at the highest levels of management." However, there has been no mention yet of sanctions for non-compliance.

As half-hearted as the coalition plans are, the years-long debate over a gender quota has led many business leaders to recognize that they will not be able to make do without female senior executives in the future. This has even resulted in some rethinking by opponents of a legal mandate, such as Daimler CEO Dieter Zetsche.

Zetsche, like many other corporate leaders, is opposed to a gender quota mandated by law. However, he has set an internal goal for Daimler: to double the share of women in leadership positions from 10 to 20 percent by 2020. Daimler was the first automaker to bring a woman, Christine Hohmann-Dennhardt, onto the management board. And Zetsche is also putting male managers under pressure by threatening to reduce bonuses for those who do not promote enough women. The argument that women are now being promoted simply because they are women is "basically bullshit," says Zetsche, noting that he is not aware of any case in which the promotion of a woman has later proved to be a mistake. "I am aware of a few such cases with men," he adds.

On the supervisory board, at least on the capital investor side, Daimler is already meeting the 30-percent target now being discussed. Three of the 10 members on the capital side are women: former Nokia executive Sari Baldauf, former Nestlé Executive Vice President Petraea Heynike and former Avon CEO Andrea Jung. The women are from Finland, the United Kingdom and Canada, thereby also bringing more of an international flavor to the supervisory board. This has improved debate within the board, say male members.

Other major corporations have also reacted to the changing environment. In March 2010, Deutsche Telekom was the first company listed on Germany's DAX stock index to announce that it plans to place women in 30 percent of middle and upper management positions by the end of 2015.

The example of Lufthansa shows that it is possible to fulfill the quota. The airline's supervisory board adopted a resolution to increase the share of women in management, and the company is also changing its corporate culture to this end. Leadership positions throughout the company will now be filled in a way that satisfies certain criteria, including gender and nationality.

Energy giant RWE, based in the western city of Essen, is taking a different approach. It currently has only one woman on the capital side of its supervisory board, but it has also made a voluntary commitment to double the share of women in management positions by 2018. The company has a very active women's network, let by Marie-Theres Thiell, managing director of RWE East in Prague. Her lobbying even led the management to adopt the goals of the "Women on Supervisory Boards" initiative. CEO Peter Terium says: "RWE wants more women on supervisory boards and in top management, because it's an important tool in better positioning the German economy for the future."

Under the energy company's plans, it will be standard procedure to nominate women already working for RWE for supervisory board positions opening up within RWE subsidiaries. The company offers them special training programs.

Claudia Gläser has completed one of these programs. The 44-year-old mechanical engineer has been the managing director of Gläser GmbH, a mid-sized company in the field of hydraulics and plant manufacturing, for 11 years. Gläser manages 60 employees in a company where about 40 percent of employees are women. "I have always made sure that we have a healthy mix and, most of all, that we hire the best people," she says. She notes that woman often have better degrees than men, even in technical fields.

Gläser is also head of the Union of Women Entrepreneurs (VdU), and a clear proponent of the quota. The VdU began developing a pool of female candidates in 2011, "to finally invalidate the knockout argument that there aren't enough qualified women." The pool includes profiles for 400 women in top management positions, of which about 150 were trained for working on supervisory boards in collaboration with the PwC consulting firm. "Now how many male candidates can make that claim?" Gläser asks.

Recruitment consultants are quick to point out that the lack of women in top positions is not the result of a lack of qualified female candidates. "We have expressly looked for women in recent years, have found them and have recommended them to companies," says a senior manager at a large recruitment agency. But even though companies claimed they wanted to hire women, most jobs ultimately went to a man, and not always those with better qualifications. Critics of the quota, however, argue that there are too few suitable women.

A person working on a supervisory board must have high qualifications and a broad understanding of companies and the economy, and must also bring in specialized expertise in certain areas, to enable them to carry out effective control in all kinds of areas, says Ulrich Lehner, former chairman of the chemical products company Henkel and, with his many board memberships, one of the most influential business executives in Germany.

Truly effective supervisors serve on so many boards that taking on yet another position is usually out of the question, because they would be stretched too thin, says Lehner. Qualified women -- so-called "golden skirts" -- have been inundated with inquiries, he explains. He is referring to such high-profile supervisory board members as Simone Bagel-Trah, Ann-Kristin Achleitner and Nicola Leibinger-Kammüller.

Is Fear at Work?

But there is no risk of the gender quota leading to a dictatorship of the "golden skirts." The male contingent is probably more concerned that the growing number of female supervisory board members could lead to the definitive end of male dominance. For decades, the "Deutschland AG" corporate system, with its network of cross-shareholdings, was a men's club where the top positions were distributed between members. In a bid to counter that, the maximum number of supervisory board positions per person was limited to 10.

Currently only 10 female representatives of the capital side on the supervisory boards of the 160 publicly traded companies hold two board positions simultaneously, while only three women hold three positions each, according to an analysis by the Kienbaum human resource consulting firm. In the 30 companies that make up the DAX index, only 13 percent of women supervisory board members hold more than one seat, compared with 17 percent among their male counterparts.

The men will simply have to get used to dealing with more women in the future, even if some still find it difficult. For instance, one fund manager at the last Daimler annual shareholders' meeting criticized the appointment of former Avon CEO Jung to the supervisory board. He noted that the board would be better off improving its automotive competency than "cosmetically increasing the gender quota."

That was too much even for Daimler Supervisory Board Chairman Manfred Bischoff. "We don't make cars on the supervisory board," he said. Andrea Jung, he added, could contribute her experience in the important US market to the board, in addition to her outstanding management credentials. One ought to think that would be enough.