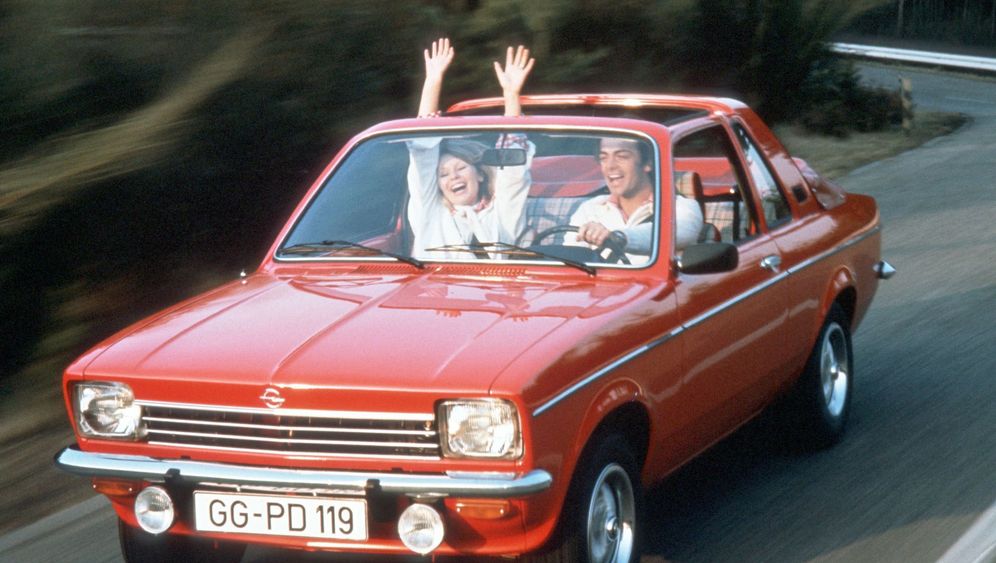 Photo Gallery: Opel on the Ropes

All is well in the central German town of Uslar -- for Opel and life in general: 15,000 inhabitants, three clubs for the card game Skat, an idyllic setting in the Weser Uplands and a car dealership with what could be described as wrought-iron charm.

Joachim Siebrecht, 64, represents the third generation of Opel dealers in his family and he takes no prisoners. He used to think that there were only two kinds of people in the world: his customers, or roughly half the townspeople, and the rest of humanity. He didn't even greet non-customers on the street, and if one of the locals dared to buy a car elsewhere, Siebrecht would immediately give him the cold shoulder. As far as he's concerned, anyone who abandons Opel must have a character flaw. End of the story, period.

The situation has become somewhat more complicated now that his son Maik, 39, also sells Chevrolets and has also acquired a Mercedes dealership on the other side of town. Things were different in the old days. More straightforward. Better. No doubt about it.

Granted, not even the elder Siebrecht can remember the days when Opel got its start here in Uslar back in 1926. But he still knows that the first car he wrecked was an Opel Manta. That kind of thing forges a bond between man and machine. And he recalls that there was a time when Opel had a 20 percent share of the German car market and had even made inroads into the premium segment. He says the Diplomat Coupé is definitely the best car that the brand has ever built.

But then Opel abandoned the segment, and BMW and Mercedes elbowed their way downwards with less expensive models. In 2009, Opel's American parent company, General Motors (GM), filed for bankruptcy and dragged its German subsidiary dangerously close to the financial brink. That sparked such an uproar that people were screaming all the way to the Chancellery in Berlin for the government to intervene. Siebrecht and the other dealers were even willing to back a so-called rescue company so they could buy a stake in the troubled carmaker. Things haven't improved much since then.

These days, nobody needs to commit to memory the Opel CEO's name anymore because the head of the company is replaced so often. The current interim boss recently grilled sausages at a celebration marking the firm's 150th anniversary. And, after a century and a half, the birthday boy is certainly looking his age: In the fall of 2012, the carmaker is relying on government-subsidized programs to avoid layoffs by reducing worker hours, a number of plants are threatened with closure (the Bochum facility in particular), sales have plummeted, there are fears of billions in losses and Opel's market share is nose-diving. In 1995, the figure was 16.5 percent; today, it stands at 7.1 percent.

"Of course, that's simply appalling," says Ulrich Brass, 56, another veteran Opel dealer: headquarters in Aschaffenburg, 1,000 employees, €450 million ($580 million) in annual sales, the bulk of which are with Opel. He would like to "finally see some continuity in the company's management."

Siebrecht and his son admit that others, such as Volkswagen CEO Ferdinand Piëch, seem to have a better grip on things -- and they sound somewhat jealous. But at least they still rule the home turf in Uslar. After all, this here is Siebrecht country, an Opel bulwark! Beyond the Weser Uplands, though, things are looking increasingly gloomy for the automaker -- and for other players in the industry.

Brass says that, these days, younger generations "generally have a different relationship to their cars," and that the desire to own a vehicle is becoming much less pronounced than it used to be.

Nearly all car manufacturers have run into difficulties again: Peugeot, Citroën, Ford and Fiat. Even BMW and Mercedes are losing ground. Early last week, the company bosses met with Chancellor Angela Merkel in Berlin and complained that they needed a few billion euros in state support to break into the market with their electric cars.

That is, however, the least of their problems. The real quandary is that production capacity in Europe's automotive plants far outstrips people's desire to buy. That's hardly surprising in crisis-stricken countries, such as Spain or Italy. But it's also the case in France and even in Germany. Only a few years ago, nearly 16 million new cars were sold each year in Europe. This year, European sales will drop to below 12 million units.

The market "appears to be saturated," says Kurt Kröger, a major car dealer in Hamburg who has been the owner and CEO of Dello GmbH for the past quarter of a century and boasts annual sales of €400 million, including with Opels. He expects next year will entail "significant structural changes among manufacturers and dealerships," which is a polite way of saying that they are all headed for a crash.

Opel merely leads in the pessimism rankings because, on top of everything else, it suffers from many homemade problems. And since car models are become increasingly similar, brands need an image. What kind of image does Opel have? A very problematic one.

To cite a non-representative example, on a normal business day in the underground garage of SPIEGEL headquarters in Hamburg, there is not a single Astra or Insignia or whatever Opel calls its models these days. After demanding assurances of complete anonymity, a colleague finally agreed to talk about why he drives an Opel Zafira: practical, reliable, good value for money and so on.

He gave reasons that could have just as easily applied to the purchase of products like anti-fungal foot cream and vacuum cleaner bags. "We selected the car according to completely rational and pragmatic criteria. Emotions didn't come into play at all," says the colleague, who occasionally finds it embarrassing when he has to jump to the car's defense among his circle of acquaintances. "Even people who own a VW Sharan think they are somehow better."

Opel, it would seem, is the opposite of sexy. The brand isn't even suitable anymore as a target for malicious lampoons, such as in the 1990s when leading German actor Til Schweiger celebrated his cinematic debut with the role of his life as a Manta-driving idiot. At the time, people in Germany at least still told jokes about Opel, which was ridiculed as the cheap, plebian car of choice for the socially maladjusted: What are 25 Opels in a parking lot? Parent-teacher night at the special-ed school. And why do Opels have rear-window heating? So people's hands don't freeze when push-starting the car in winter.

These jokes are, of course, stupid and unfair. Opel has never built better cars than it does today. Opel dealers agree, and so do car testers. And the SPIEGEL colleague with the Zafira concurs. But nobody cares anymore. The brand's reputation has been ruined.

"Of course Opel has an image problem," says Brass. Of course it's necessary "to work on the image," says Maik Siebrecht. He has his office in the basement of the company headquarters in Uslar. It has modern furniture and a big Apple computer. He says that's what Opel should become, like Apple and Starbucks. He's perfectly serious.

Opel? Cool? How in the world is that supposed to happen? Certainly not with Lena Meyer-Landrut -- the German winner of the 2010 Eurovision Song Contest, professionally known as "Lena" -- who seemed about as credible in her role as Opel brand ambassador as a vegan at a barbecue chicken stand. British singer Katie Melua currently has the job. Siebrecht and his wife attended one of her concerts in Salzburg. What can he say? Nice. He says he would much rather see German rock stars, such as Udo Lindenberg or Herbert Grönemeyer, as advertising figures. Something authentic.

Since this has all become so dreadful, dealerships have now come to see themselves as the most radiant of brands: Dello, Siebrecht and Brass -- they stand for proximity to customers, service, trust and so on. But it's still difficult: "I'm obviously not happy when more bad news about Opel circulates in the media," says Maik Siebrecht.

Some customers are so rattled that they have already started asking how long replacement parts will be available if the company goes bankrupt. Opel buyers -- primarily middle class, skilled workers, mid-range incomes, price-conscious and smart shoppers -- have grown accustomed to taking things in stride. But they are confused when they discover these strange Chevrolets at Opel dealerships. They look similar, aren't as good, cost a few thousand euros less, but also come from GM, right?

Brass sees this as one of the main problems: "The parent company General Motors has to more strongly differentiate its Chevrolet brand from Opel."

How does one sell cars that some people no longer want and others no longer understand?

Dealerships move their merchandise with inventive government-sponsored scrapping bonuses, incredibly low leasing rates and fantastic trade-in prices for used vehicles -- in short: endless discounts. In fact, all of the brands are doing this. By the time even a new VW Golf is delivered to the showroom floor, it's already offered below list price online. Discounts of 30 percent have apparently become the norm for certain brands and models.

Likewise, there's no limit to dealerships' creativity. For instance, Hamburg-based dealer Kröger says that he offers no discounts at all. Then he makes a dramatic pause for effect. The answer to the riddle: He offers "house prices." House prices mean, for example, that he sells the Opel Meriva Selection for €14,990 instead of €19,569. Or that he sells the five-door Astra model with the "Edition" upgrade package for €19,990 instead of €28,324.

The main secret is one-day registrations, a convenient trick allowing dealers to get around pricing laws. According to one retailer, this leaves dealerships with an extremely meager return on sales of less than 2 percent. They have to sell a whole lot of Corsas, a supermini Opel model, to keep their heads above water.

When things look particularly grim, the elder Siebrecht braces himself for the worst: plant closures at Opel and dealership bankruptcies throughout the entire sector. Perhaps in just a few years' time, the Americans will be pinning their Chevrolet logo on his treasured Opels. It won't be an easy ride for the fifth Siebrecht generation, although they are currently still driving Bobby-Cars. If push comes to shove, though, the family still has a tenant on its enormous Uslar car lot, which is the size of several football fields: They rent out space to a Lidl discount supermarket. People always have to eat. 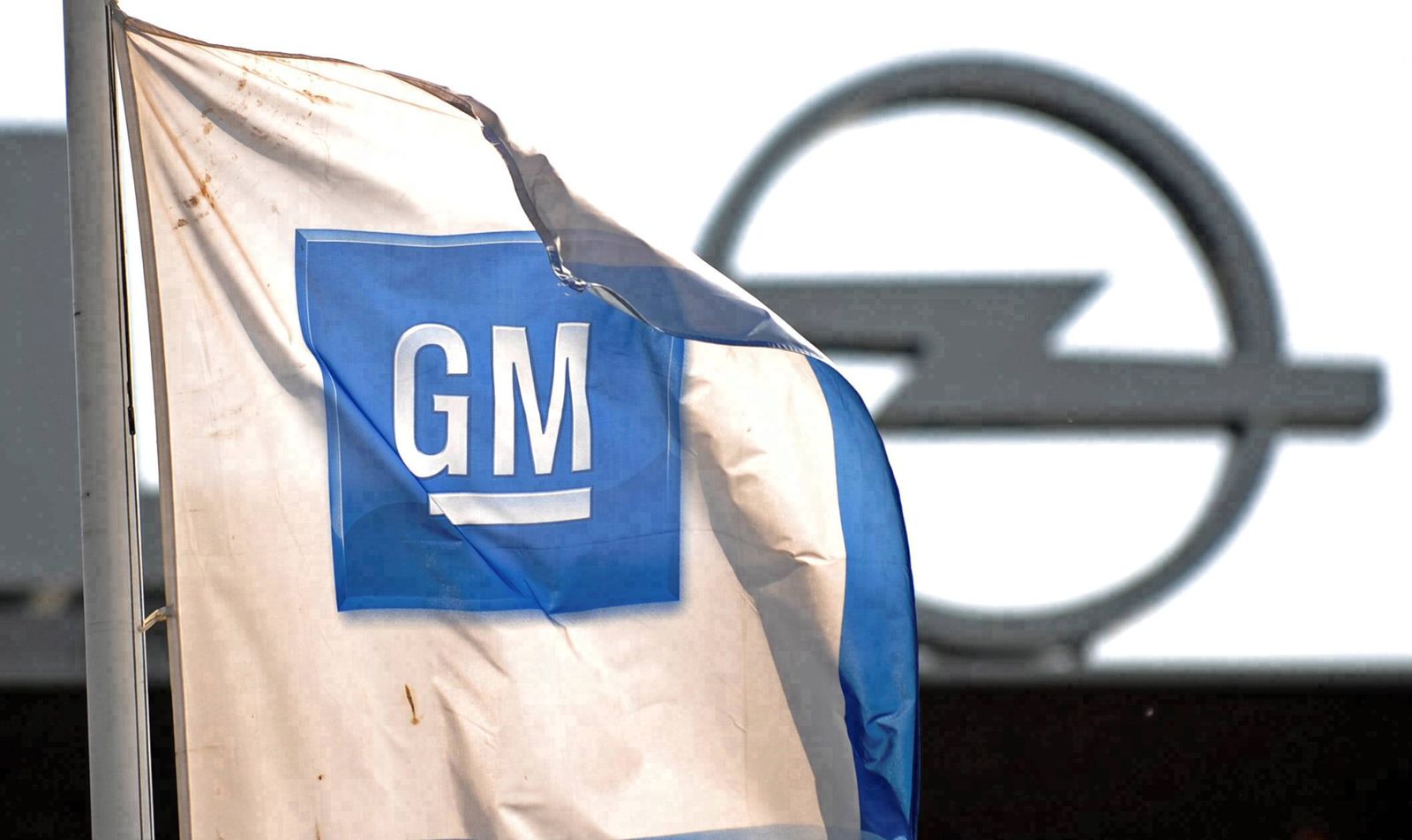 Opel has been a fully owned subsidiary of the American company General Motors since 1931. When GM filed for bankruptcy in 2009, it dragged Opel dangerously close to the financial brink. Since then, there have been constant worries of factory and dealership closings. 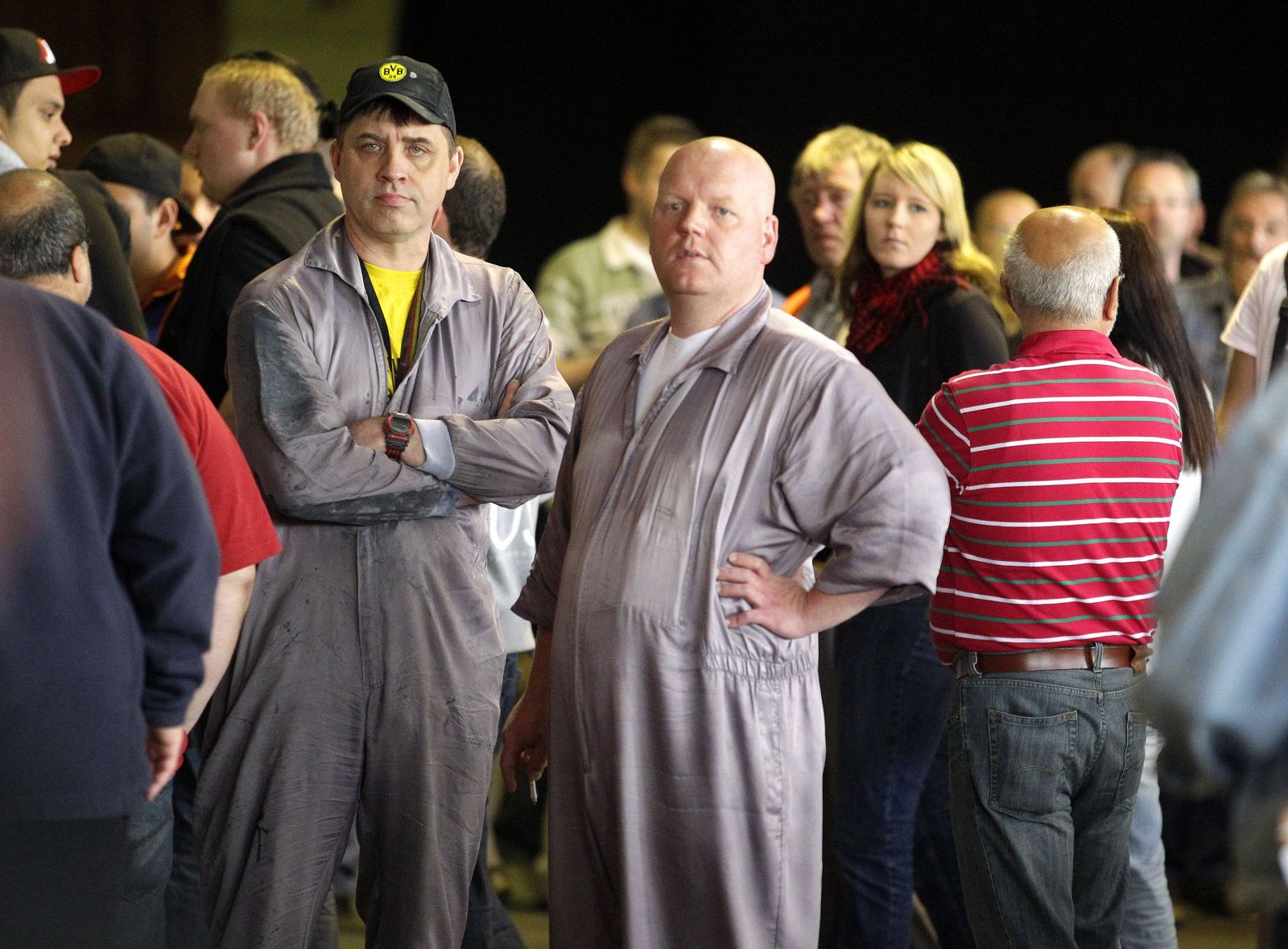 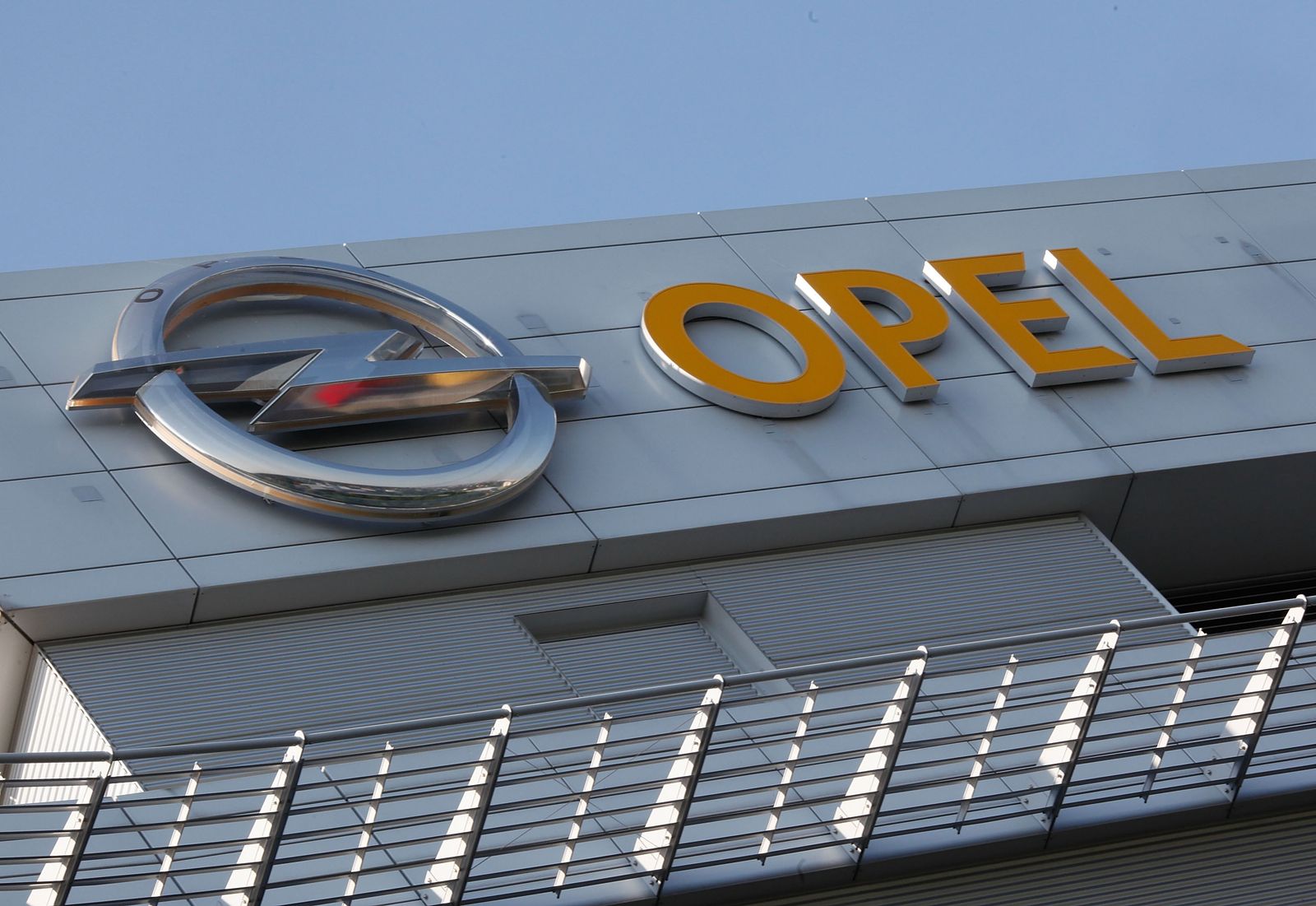 Only a few years ago, nearly 16 million new cars were sold each year in Europe. This year, European sales are expected to drop to below 12 million units. 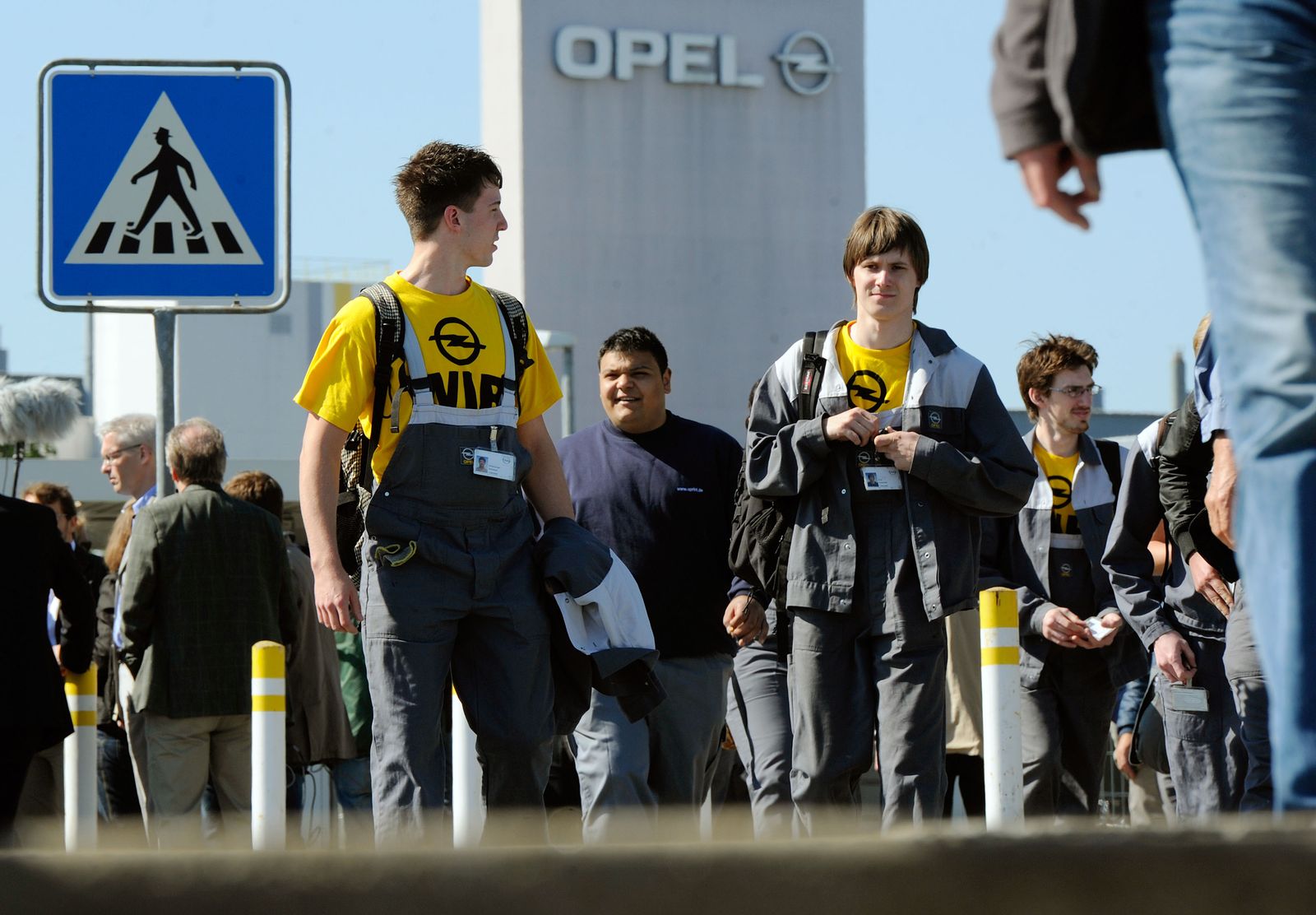 Opel workers in Rüsselsheim: A number of factors are at play in the decline in auto sales. The tense economic situation in Europe can be blamed for some of it, but people are generally less interested in owning their own cars these days. What's more, Opel has been one of the main losers in the saturated market, losing out in particular to Volkswagen.